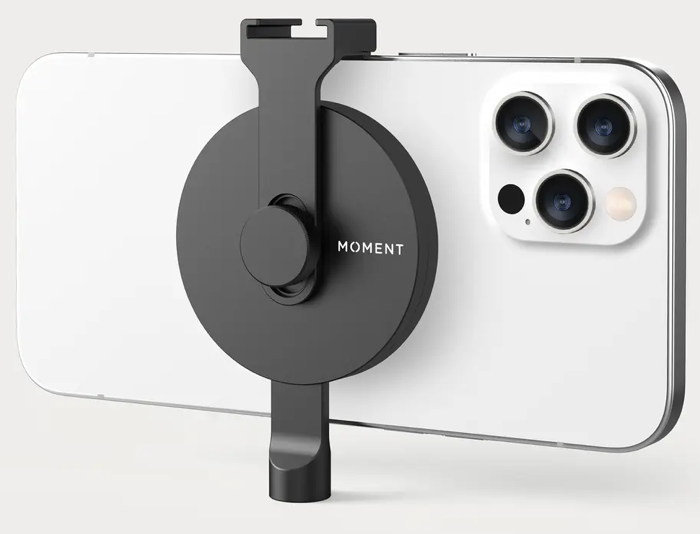 Like any good iPhone camera fanatic, I have a plethora of tiny tripods on which I can mount my iPhone. From the Jellyfish tripods I reviewed back in 2014, to the classic Joby tripods that can wrap around anything to the Joby Griptight ONE Micro Stand that Pat Dengler told us about in 2019, they all have one thing in common. You have to attach a mount to the tripod in order to hold your phone.

Some phone tripods come with a spring clamp to hold your phone. In order to use one of these spring clamps with your phone, you first spread the clamp open pulling against the spring force. Tripods have a 1/4”-20 threads per inch screw that goes into the bottom of the mount to secure it to the tripod.

These spring clamps work to hold your phone, but in my opinion, they don’t work well. The first problem is that the clamps have to be sized to stretch open to fit phones as large as the iPhone Pro Max or Pixel 6 Pro, down to tiny phones like the iPhone SE. As a result, it’s really hard to stretch them open on the bigger phones. Throw a case on a phone and the problem gets even worse.

The problem has been exacerbated by the change in the size of phones over time. The spring clamp on the Jellyfish I bought 8 years ago was for a phone much tinier than the phone I carry today. I can stretch it open wide enough for the iPhone 13 Pro, but it takes some strength to do it.

There is another category of problem with the spring clamp mounts, and it’s where you choose to clamp onto the phone. You have to decide whether to cover up the screen side or the back side. It all depends on whether you’re recording yourself or away from you.

But that isn’t the worst part, you also have to be careful to stretch the clamps over an area of the phone sides that don’t hit any buttons. I know this sounds easy, but on my iPhone 13 Pro, if I put the clamp so that the center of gravity of the phone is dead center on the clamp, then it turns down the volume and hits the power button.

I started thinking, there must be a better way, and I may have found it. Enter the Moment Tripod Mount for MagSafe®. MagSafe® as a method to hold the phone is much more elegant than a clamp, but it does require either an iPhone 12 or newer, or they offer a series of what they call (M)Force cases which allow a variety of phones to have the magnetic part of the MagSafe® experience, at least with their tripod mounts.

The design of the Moment MagSafe® Mount is simplicity itself. It’s a solid metal bar that comes to a rounded end at the bottom to accommodate the 1/4”-20 threaded hole to attach to a tripod. At the top, a round disk for the magnet encases both sides of the vertical bar. That’s it. It’s a stick with a magnet.

Since the design is so simple, you can rotate the phone between portrait and landscape in small angular changes. You can’t pivot the phone, but that should be possible with the tripod you’re using.

If you’re worried about the back of your phone getting scratched up by sticking it to the Moment tripod mount, have no fear, the disk for the magnet has a nice rubbery surface to protect your phone.

The Moment Tripod Mount is only 5 inches tall, including the 2.25” magnetic disk. The form factor is so sleek that carrying the .3 lb mount will be really easy for any camera bag.

The Tripod Mount for MagSafe® from Moment is $40 at shopmoment.com.

If you need to add a light to your shooting or to mount a microphone on top, you can buy the Pro Tripod Mount Pro – Landscape & Portrait) for $60. The Pro version is exactly like the base model, except that it has a little bracket that mounts to the threaded hole in the center of the magnet disk.

The bracket is what they call a cold shoe. If you’re unfamiliar with the term, it’s a little slotted bracket mount to hold external lights and microphones. While a “hot shoe” is a bracket that also provides power, a “cold shoe” is just the mounting bracket for the light or microphone. If your light or mic doesn’t have a cold shoe attachment point but instead has a 1/4″-20 threaded hole (like my cube light), Moment has you covered there too. They sell a little gadget called a Moment Cold Shoe to 1/4″-20 Mount for $9. It’s one-stop shopping with Moment!

If you want to use the Moment Tripod Mount on a big-girl tripod, you may need an additional piece of hardware. My Manfrotto tripod has a 1/4”-20 thumb screw that goes into the tripod mount. The tripod holds the mount in place by a rotating clamp, but it requires the mount to have a surface on the bottom to secure it in place, and since the Moment mount is a small cylinder, it would have nothing to clamp against. I think a thin washer might need to go in my tripod bag for the times I want to use the Moment mount with the big-girl tripod.

The one thing to consider if you’re interested in the Moment Tripod Mount is whether you really need to be able to record video or take photos in portrait orientation. That requirement means the tripod mount has to be quite tall. I tested using the Moment Tripod Mount Landscape and Portrait with some of my tiny tripods, and it was so top-heavy it was afraid it might fall over. If you’ll only be using it with hefty tripods, like the bigger Joby’s for example, then it won’t be a problem.

But if you know you’re not going to ever need to shoot in portrait orientation, you might consider buying the Pro Moment Tripod Mount Landscape which costs the same $60 but the vertical bar piece is much shorter. That would make it much less top-heavy.

Overall I’m quite pleased with the Moment Tripod Mount for MagSafe®. It’s not cheap but it’s sleek and simple, it fits lots of phone models, and it never turns the volume down or shuts the phone off.