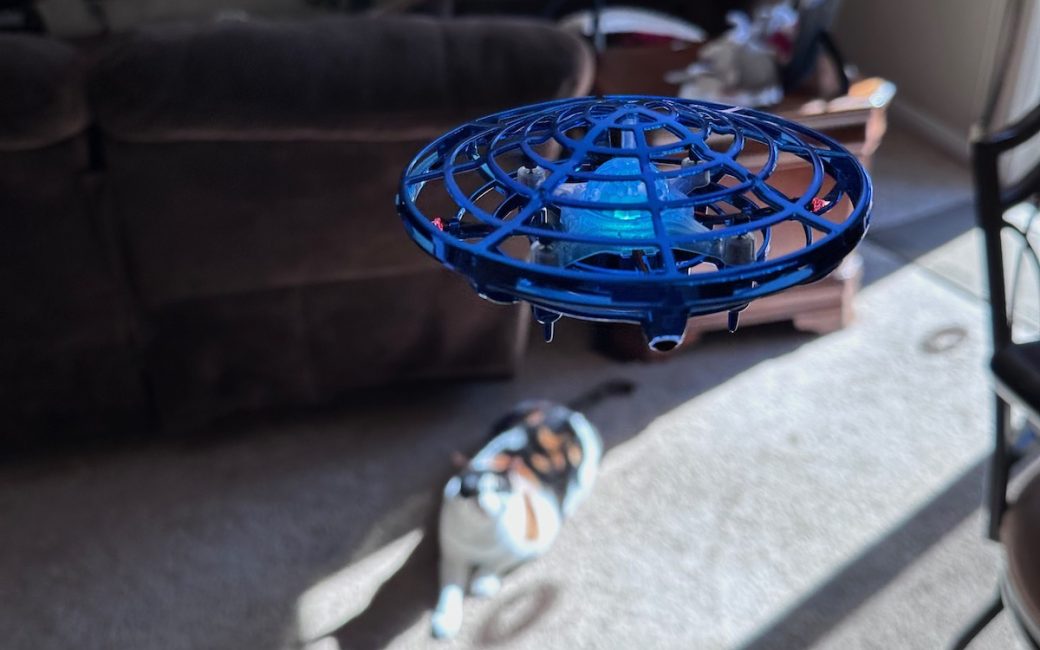 The reviews and explanations I’ve been doing lately have been pretty meaty so it’s time for me to give you something frivolous. I think you need a Scoot Drone to play with inside your house. The Scoot isn’t the only drone like this available on the market, but this particular model has a few more tricks than others we’ve bought

The Scoot Drone is a flying saucer-shaped cage about the size of your hand with your fingers outstretched. The cage is made of a soft plastic that’s bendy but still stiff enough to hold its form.

Inside the cage is a quadcopter mechanism to make it fly. When you turn on the tiny switch, a center dome will glow green, and lights on two sides will alternate blinking green and red.

Initial calibration is suggested, and you do that by flipping the Scoot Drone around in your hand a few times. The center light will blink telling you it’s in calibration mode, and then you’re supposed to set it on a flat surface. Once it calibrates, the center green light will stop flashing. You’re ready to fly.

To fly the scoot, you hold it upright in the palm of your hand and give it a little push up in the air or just let it drop. Immediately the rotors will begin to spin and it will start to fly around the room.

Fairly soon after launching, it will spin in a circle a couple of times. The Scoot is scanning its environment with a sensor on one side and one on the bottom. This lets it know where objects are that it should avoid, like walls.

At this point the Scoot Drone will just fly randomly around the room without hitting anything and will go up and down as it travels. While it’s fun to watch the cats get annoyed by this, it’s more fun to control the Scoot.

If you put your hand next to the side of the drone, it will lean over and fly away from your hand. If you want it to go higher, just get your hand under the drone and it will fly up.

If you want the Scoot to stop flying, just catch it and turn it upside down. It’s surprisingly easy to catch so this works well.

What makes the Scoot Drone stand out compared to other tiny indoor drones I’ve played with is that you can make it flip. If you wait until it gets near you and low enough, hold your two hands near the sides of the drone.

The drone will let you know that it sensed the command by flickering the center light white. Now just brush your hand under the drone, it will fly straight up, and then do a controlled flip!

It’s a bit tricky to get the hang of this trick and I think that’s why it’s fun. You have to run around your room trying to get in position to get your hands on either side and one poor move and it will fly away from you. I keep forgetting which hand gesture I’m supposed to do so I get a lot of entertainment out of trying to do the one trick.

The Scoot Force 1 drone charges with an included proprietary USB-A charger cable so you can charge it from a USB-A wall charger, power bank, computer, or even one of those USB-A car chargers.

As I mentioned, the Scoot Force 1 drone has four propellers inside the semi-flexible cage. This design means even if it bumps into something, the plastic is pretty soft, and the blades can’t hit anything. For some reason though, the Scoot comes with replacement propeller blades. The blades have a twist to them, so there’s a diagram showing you where to put the replacement A vs B blades.

But what they don’t explain is how on earth you’d ever damage one of the blades.

Now you might be wondering why I call this an indoor drone. That’s because Steve and my grandson Forbes thought it would be fun to fly my last one outdoors. Since the Scoot flies by mapping the surrounding walls, floors, and ceiling and flies around relative to those surfaces, what do you think happened when they flew outdoors? Yep. It flew away. We think it landed in our neighbor’s pool but they were too afraid to go look.

If you’re looking for an inexpensive gift for someone in your life or you want to treat yourself to a little silliness, I highly recommend the Scoot Drone Force 1 for minutes of entertainment till you have to charge the battery.

You can find the Scoot Force 1 on Amazon for $25. I hear you can let kids play with them too.