Ages ago, listener Tammy sent me an interesting question – she asked me what my top 5 favorite apps were. I asked her Mac or iOS and she said both. I complained that the question was too hard but that maybe I could answer with 5 in each category. The more I thought about it, I realized I can’t answer that either – I have to pick 5 for Mac, 5 for iPhone and 5 the iPad. It’s about time I answered her – I wonder if she even remembers asking me!

I’m going to set some ground rules here. First, I don’t think I’ll include anything that comes from Apple, unless maybe it’s a hidden gem or something like that. Second, even though Clarify IS one of my favorite apps, since they’re an advertiser I think I’ll leave it off the list. I also decided to eliminate apps that maybe everyone knows about so that the list is more interesting. Let’s start with my Top 5 favorite iPad apps, and later we’ll go through my favorite iPhone and Mac apps.

Ok, you guys probably saw this one coming, since I spent the entire show 2 weeks ago talking about how much I love mind mapping and how iThoughts is my favorite mind mapping tool. I couldn’t leave it off this list though, since I immediately whipped it open to start making my list of favorite apps! I created a central node called favorite apps, then three nodes form iPad, iPhone and Mac, and then started dropping in my favorites in each. When I noticed that I had too many favorite iPhone apps and not enough iPad apps, I simply dragged one of the nodes and moved it from iPhone to iPad since the app ran on both platforms. iThoughts really helps me organize my thoughts before they’re linear.

I struggled with whether to include LastPass because while I use it constantly, and it works really well, I still wish I never had to deal with passwords. LastPass doesn’t make me happy, it just makes me less sad. I guess I get a little bit happy when I push auto-fill and it plops in my name, home address, phone number, email address, credit card number and expiration date, but the whole password thing just feels like a necessary evil. I’m glad LastPass is in my arsenal and I use it constantly, but I sure wish it didn’t have to exist at all! 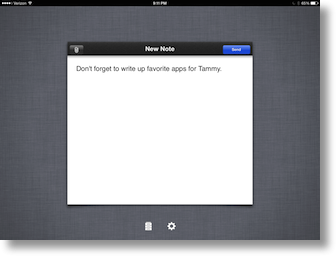 My next pic will really irritate every hard core Getting Things Done person listening. You know the type, they use Omnifocus to write up their tasks, achieve Inbox Zero and all that nonsense. Don’t you hate those people? Hate may be a strong word, but all that productivity they have makes me crazy. One of the most basic mantras of these people is that you should never use your email inbox as your to do list. Which is exactly what I do. I’m out and about and I realize I need to remember to do something – I send myself an email. It works for me because when I get to my email I realize I have something I need to do – and either I’ve grown bored with the topic by now and I just delete that thing I thought was so critical earlier, or I do it, or I add it to my to do list, Wunderlist.

But I don’t use Mail on my iOS devices to send these emails to myself, I use Captio from Tupil to send the emails. As Tim Verpoorten used to say, Captio does one thing and does it well. When you first launch Captio, you tell it just this one time what your email address is. After that initial setup, from now on you can tap on Captio, type in a message and hit send. Boom – no addressing the email, no subject to mess with, just type and hit send. You can attach a photo if you like, but I’ve never messed with that. Hey – maybe I don’t even have to type – just take a picture of the thing I need to deal with when I get home and be done with it! I must confess I use Captio on the iPhone more than the iPad but it’s a universal app and I have too many iPhone apps I love so I moved it to the iPad list!

Captio might sound like heresy to you but I use it constantly and I seem to get an awful lot of stuff done, don’t I?

Downcast for Video Podcasts from DowncastApp.com

Every morning while I brush my teeth and have my breakfast, I watch the news. But I don’t watch TV news, because that’s just way too darn disturbing. I watch tech news and analysis. The Daily Tech News Show with Tom Merritt is my current favorite entertainment for my morning ablutions, and Downcast is my app of choice on the iPad. I love how I can double tap on the screen to pause, it flips up to my AppleTV (when my AppleTV is in the mood) and it’s super easy to download video podcasts using either search or entering a url directly. Man, I’m making this sound boring but it’s an awesome way to watch shows!

I watch Don McAllister’s ScreenCasts Online podcast at the gym when Dorothy deserts me, and I can’t tell you how much attention I get when I’m watching my own personal TV. Most normal people still don’t know what a podcast is – don’t you feel sorry for them?

You’ll be interested to note when I get to the iPhone apps – I don’t use Downcast, but rather another pod catching app.

I’m not a fan of writing things by hand any more, but the one place it still seems to fit is in taking notes during a meeting. Somehow I get more distracted with spelling things correctly and formatting when I type, and hand writing allows me to pay attention and focus on the speaker. I might even want to sketch something out too. Then again, sometimes I do like to type notes. I want to be able to do all three. I also want my notes organized.

There’s a problem to be solved though with hand writing on an iPad. It’s simply not possible to write clearly as small as you can with a pen and paper so you end up getting maybe three lines on screen at a time and your handwriting looks like a 1st grader’s script.

My app of choice to solve all of these problems is called Notability from Ginger Labs. Notability lets you flip back and forth typing notes, handwriting notes, sketching and even doing voice recording. They also cracked the code on how to allow you to write by hand and yet not have the letters be huge. At the bottom of the screen you can pop up a magnifier section. You handwrite comfortably in the magnifier, but your text comes out nice and tiny on the main screen.

I’m not going to go into all of the details of Notability today because I actually did a full review on show #360 in April of 2012. I think it says something that two years ago it’s still one of the most useful apps on my iPad.