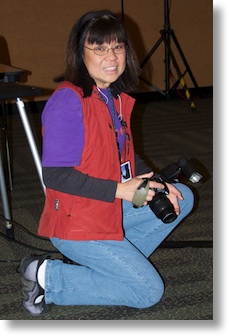 Ada Lovelace was an English mathematician who lived in the 1800s. She is often described as the world’s first computer programmer because of the work she did on Charles Babbage’s early mechanical general-purpose computer. Her notes include what is recognized as the first algorithm to be carried out by a machine.

I only know about Ada Lovelace because Kirschen Seah of freerangecoder.com told me about her last year on Ada Lovelace day. Kirschen explained that this day was created to encourage people to write about those women in the fields of Science, Technology, Engineering, and Math who have inspired us. The hope is by celebrating Ada Lovelace’s accomplishments along with other outstanding women in STEM, we will be able to encourage more girls to go into these scientific fields.

I’ve worked with a lot of brilliant scientific women over my 35 year career but I’ve chosen Kirschen Seah herself to honor on Ada Lovelace day. Kirschen is a computer scientist, a bicycle mechanic, a photographer, and a pilot. I’m inspired by her not just for her accomplishments in industry but because of her relentless enthusiasm towards encouraging more girls to join the technical disciplines. For example, she works like a mad woman on Take Your Daughter to Work Day to help develop experiments and design contests to stimulate young minds. When you hear her talk about how much fun she has helping them you cannot help but feel the thrill she gets from stirring young minds to show them what they can do.

I got to see her excitement first hand this year. During Macworld Expo, App Camp For Girls was looking for volunteers to help young women in the program to get a taste for programming. You could not have kept Kirschen from volunteering to help if you’d had an army to help you. When she came out of the session she was so invigorated by the amazing young minds she’d met and clearly she had gained energy by being allowed to help them reach their goal to become programmers.

If you want to learn about more incredible women inspiring young women to join the STEM fields, check out findingada.com.