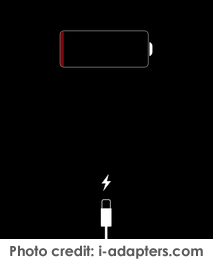 About a week and a half ago I was about to plug my iPad in to charge for the night, when I noticed it was indicating that the battery was completely drained. This is indicated by a black screen with a battery symbol showing a red line for how full it is (not very) and a visual invitation to plug in your USB cable. I thought this was an odd sight, as my iPad normally has about 35-45% left when I plug it in at night. I figured, no big deal, I’ll just plug it in and all will be sorted in the morning. Unfortunately I awoke to the same symbol on screen.

I tried the usual stuff, holding down the power button, the home button, both buttons, holding them long and holding them short and nothing would kick me out of that mode or even turn the device off. I went to the Googles and read about how you can do a full firmware restore to your iDevice, called a DFU restore, or Device Firmware Update. It’s a dance you do where you hold down the home button while plugging into your computer and launching iTunes with your other three hands.

If you’re lucky, iTunes will eventually recognize that you’ve put your device into the restore mode and asks permission to do so. I was lucky and did get that screen. When it was done, it offered to restore from my latest backup to which I delightedly agreed. I went off for a run on the beach and when I got back my iPad was back to normal. Yay!

I happened to open Downcast and noticed that it was downloading FIFTY FOUR video podcasts! I started deleting with fervor before if filled up all my space. Halfway through this, the iPad restarted…and came up with the dead battery symbol. How very sad. Time to make an appointment with the Genius Bar. I couldn’t get one for several days but since it was the holidays I wasn’t quite as dependent on my iPad as usual. As my son Kyle so lovingly pointed out, “Gee mom, that’s gotta be tough because you don’t have ANY other Apple devices to use while you wait.” He’s so supportive.

About an hour after I made the Genius Bar appointment, the iPad spontaneously rebooted again and came back up normally and showed 100% battery. Um, hmmm. What does that mean? For two days my iPad behaved completely normally so that when I met with my new friend James at Apple, it was perfectly obedient. James was awesome, for some reason he had plenty of time to spend with me and we had great conversations about photography while we watched the hardware test be performed. It was pretty cool – he was able to run the test from his iPad to mine. You KNOW the punchline, right? My iPad passed the hardware tests with flying colors. He looked deeper into what crashes I’d had, and saw a bunch of crashes not of springboard or backboard, but some new “board” I hadn’t heard of before but he still didn’t see anything that concerned him.

What he DID notice was that my AppleCare was running out on this very day so he offered to replace the device just in case. I pointed out that I ALWAYS buy AppleCare on my devices, and he then noted that I did have coverage for another year. His screens were indicating that there was a gap of 20 days in there for some reason and he didn’t want to take any chances on me being covered. Well that’s cool with me because I was pretty darn certain this WAS a hardware problem. He did say that if it were a software problem it could have been reintroduced because I restored from a backup and he said it might be something to try. I asked for the replacement, which he ordered and said would come in in a couple of days.

And you know what happened next again, don’t you? Again the iPad (right after I got home from seeing James) died on me. Only this time I couldn’t even do the DFU restore. This was concerning because that meant I wouldn’t be able to erase the device before swapping it out to Apple. Days went by of me checking in on it before suddenly again the device was fine. I did a quick erase while it was up and shortly afterwards it died again.

The end of the story is that on the 26th I got a message from Apple that my new iPad was in and they swapped it out in about 5 minutes for me. I continue to be a big fan of AppleCare because of incidents like this. To get the swap out would have cost $300, while AppleCare cost me $100. I don’t end up using AppleCare too often, but just often enough that it saves me money. Probably the most dramatic example was when Steve’s 2 year old 27″ iMac had a failed power button – and they had to entirely disassemble the iMac to get to the power button, removing the screen, the drives, the RAM, the logic board – everything was out before they got to it. That repair would have been $600 so we were pretty darn happy to have AppleCare.