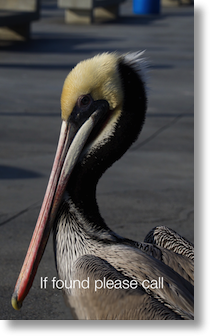 Back in 2012, I told you about a handy little $1 app for iOS called Bob’s Contact Lock Screen. Let’s say you left your iPhone at a party. If someone of good moral character found it and you keep your phone locked, how would they know it was yours and how to get it back to you? Bob’s Contact Lock Screen was designed to let you take a photo of your choosing, type some text on it such as, “If found please call…” and then save the new image and use it as your lock screen image. I’ve been using it for years, and felt a little bit better knowing there was a chance I might see my phone back if I lost it.

However when I bumped up to the iPhone 6, I realized the images created by this tool were leaving a giant black empty place across the bottom because it hadn’t been updated for the bigger screen sizes. I wrote to the devs asking if they were doing a new version (that I would happily buy again for another whole dollar) but I was summarily ignored. So much for support from Bob.

I like changing my picture on my lock screen often so I just stopped having my contact info onscreen. Then on Thursday night, Steve forgot his phone in a restaurant and they called me about it! How did they know to call me? Because Steve had used the application to put my phone number as a contact on his lock screen. The good news is now we know it actually works because he got his phone back. The bad news is I needed to find a way to reproduce what Bob had done for the smaller form factors.

I thought about making Dorothy write me an iOS app, but then I came across a blog post on CNET suggesting an alternative solution to the same problem. They pointed me to an application called Over for iOS. Over isn’t designed to create lock screens, but rather is more generically intended to put text on an images and save out a new version of the image. Over lets you choose from a big list of fonts, change opacity, color, size, and position. The level of flexibility is nice but at the same time I would have rather found an app designed to do one thing and do it well.

Over is from http://madewithover.com/ and costs $2.

But then I got to thinking, what about Skitch as a better solution? As I’ve told you before, Skitch is free and runs on positively everything. One of the nice things about Bob’s Contact Lock Screen was that it let you get the image on screen just the way you wanted it. With Skitch (and this would probably work with Over) I solved this problem by bringing up the photo I wanted, then zoomed in a bit and panned till I got it just right. Then I used the power and home buttons to take a screenshot. That guaranteed I had an image exactly formatted for MY phone. Since Skitch now has access to open AND save images to the Photos app, I was able to open my image, use the text tool to type on screen, resize and move the text around using the handy handles (they really should call them that) and then save the whole thing out as an image to my Photos app. Now like with Bob’s software, I can open Settings, Wallpaper and set the new image as my lock screen.

If you want fancy font options, I’d use Over for this task but if you want free and easy, give Skitch a try on iOS, Android and Windows Phone. One last point I want to make, in the “be smarter than me” category. Way back when I first did this, I made the idiotic error of puttying MY phone number on the lock screen. You might have a wee bit more success if you put someone else’s phone number on there like Steve did!

3 thoughts on “Put a Phone Number on Your Lock Screen”