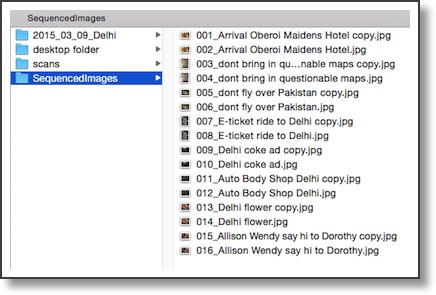 I’m slightly more organized about my photos than the average bear as we’ve discussed in the past. I like to name my photos so that at any time if someone mentions say halloween costumes, I can grab my phone and instantly show them the photo of the amazing bat costume my father made for my brother Grant in 1965.

It takes a lot of discipline to keep up with this. But here’s a problem. Let’s say I want to post a big pile of photos online as a nice album. If I carefully name every photo and then do an export from the Photos app, they’ll be on my desktop in alphabetical order, so when you first look at the album, all you’ll see are pictures of Allison! Now I’m as big of a narcissist as the next guy but at least I like to sprinkle myself about an album, not front load it. What I want is to be able to post my photos in the order in which they were taken. Sometimes maybe I want to reorder the photos inside the Photos app first, just a bit to make a more interesting flow of a story. I would want them to stay in that order when exported and posted online.

In Aperture you could export to the file name, or add a trailing or leading sequence number. That worked great. I could export my images with a number up front so they’d be 01, 02, 03 followed by the file name instead of Allison, Allison, Allison. Unfortunately Photos lets you choose to either export to the Title of the photo, or to a sequenced image, but not sequence plus title. There’s some great folks working on scripts to do the export over in the Apple forums but I didn’t have a lot of success with them and Dorothy had left me for 2 months to go to Alaska so I couldn’t get her help and gave up.

But then I had an idea of my own. It’s clumsy and inelegant but it actually works pretty well. I created an Automator script! First I name all of my photos over in Apple Photos and export them to a folder. I select all of the photos in the folder, and then launch my Automator Script from the Services menu (File —> Services). It copies the images to a new folder called SequencedImages. If the folder doesn’t already exist, Automator creates it. I have no idea how I got it to do that but it works! Next it sorts the images in order created. In theory this will be the order that Photos exported them, which should be the order I had them in the album in Photos. It gets close, sometimes a photo here and there seems to be out of order but not by far. The only thing I can figure is that the export process is so fast that the time stamp on them is identical out to the number of decimal places so Order Modified gets confused. By the way I do the copy just in case the script goes wrong on me.

The script renames the images using an option called Make Sequential, adding a number preceding the existing name. I even tell it to make it 3 digits long just in case I have a giant pile of images to post. Finally it exposes the nicely numbered images in date order for me in the Finder. I’m pretty darn impressed with myself that I figured out how to do this without Dorothy’s help. I guess she’s a good teacher in spite of all the complaining I do!

I’m guessing there’s an easier way to do all this but I had fun and it solved my problem. If you want to download my Automator Service and have a play with it, I put a link in the shownotes to it in Dropbox: Allison’s sequenceImages Service in zip format. The other good news is that we’ll get a new version of Photos in El Capitan and maybe, just maybe, Apple will give us sequenced images with title as an enhancement. I’ve suggested it enough times in apple.com/feedback!