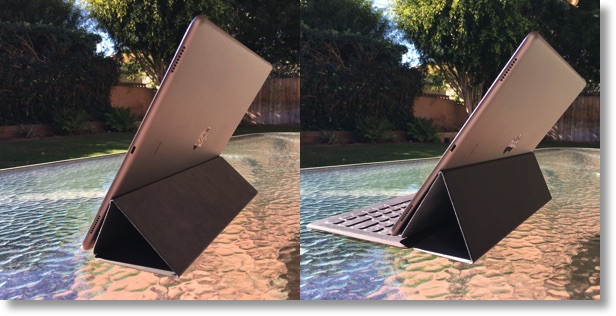 When the iPad Pro came out, many of us complained that Apple had lost their way because they didn’t have the Pencil and the Smart Keyboard available on day one. I’m starting to think there might have been a method to their madness.

If the Pencil had been available on day one, I think I would have been super distracted by it and not really given the iPad Pro as thorough of a run through or as much attention for what it is as a device without a stylus. In truth for me the Pencil is an awesome addition but I’m using it every few days while the iPad Pro is my nearly constant companion.

The same effect happened with the Smart Keyboard. When the iPad Pro first came out I was carrying around this giant piece of unprotected glass which was terrifying. My plan had been to use the Smart Keyboard as my cover for the device but it didn’t ship immediately so I ended up buying a Smart Cover to hold me over. I was hoping that the keyboard would come out within the 14 day window so I could return the cover but instead I paid $39 for around 3 weeks of use.

The Smart Cover only covers the front of the glass as the name implies. It puts the iPad at a nice angle for typing and can also stand the iPad up for watching video. I have to say that I dislike it in both configurations. While the angle is good for typing, it’s kind of floopy and slidy when you set it down. You have to wait for it to find it’s natural position which bugs me.

If you stand it up for watching video, it’s a bit precarious feeling because the triangle doesn’t go up very high on the back. It hasn’t ever fallen over but I feel like it will if I tap the screen without holding it with my other hand. Good viewing angle though.

Without a keyboard I learned that the newly designed on screen keyboard was pretty amazing. Unlike the keyboards for the smaller iPads, this is a full keyboard with numbers/symbols across the top and some specialized buttons for cut/copy/paste and even formatting. It’s pretty great. There are a couple of irritating things. I find it very difficult to start a tweet with the @ symbol which is above the number 2. By default, the first letter of a sentence engages the caps key, but it doesn’t engage on the number keys. So if you hit the 2 at the beginning of the sentence, you get a 2 which makes perfect sense. So I disengage the caps key and hit the 2 again…which also types a 2. Well, THAT makes sense too because I don’t have caps on, right? I hit the caps key a third time and then and only then can I type the @ symbol. There is a trick, you can simply swipe up on the number keys and you get the symbols instead but I seem to always forget that until I’ve cycled that darn caps key a few times.

My favorite thing about the onscreen keyboard with iOS 9 though is the way you can put two fingers down on it and it turns into a giant trackpad. It has made editing text an absolute dream compared to putting your finger down on the text in question, waiting like an hour for the little magnifying bubble to come up which then lands under your finger so you can’t quite seen and then carefully dragging around till you get the cursor in the right spot. I love having a trackpad now on the iPad. This works on other iPads too so if you haven’t tried it, you might want to check it out.

I know there’s an iPad Pro keyboard case out there from Logitech called the Create, but I have zero interest in it. The iPad Pro weighs 1.57 pounds, why on earth would I want a keyboard case that adds 1.6 more pounds to it? That’s over pounds total, compared to the 2.06 lbs of the MacBook, a fully featured laptop. The iPad Pro is only a quarter of an inch thick which is awesome, but if you throw the Logitech Create Case on it, it bulks up to triple that thickness at .78 inches. I don’t get the attraction at all.

The Smart Keyboard in contrast is only .16 in (4mm) thick. I knew I wouldn’t get a full travel keyboard but since I’m happy with the MacBook keyboard and I love the new Magic keyboard, I figured it would probably suit my needs. At $169 this cover adds substantially to the cost of the device so it had better be good!

I happened to get delivery of the keyboard cover when Rod Simmons from the SMR Podcast was visiting so it was fun to unbox with him. I had heard that the Smart Keyboard was a bit of an origami exercise to put on but Rod suggested something awesome that made it not feel that way at all. Before I ever tried to put it on, he suggested I visualize what it should look like when on. I did that and immediately flipped it to the right configuration without any confusion at all.

The good news is that the Smart Keyboard has a triangle that goes up much higher on the back of the iPad Pro than the Smart Cover, so it’s much more stable. Steve took two pictures to demonstrate the Cover vs. the Keyboard showing how much higher it goes up and the difference in the angle. On the keyboard the triangle goes up almost to the logo so a little more than a third of the way up giving much better support.

I mentioned the origami task of folding and unfolding the keyboard. One other hint on how to fold it around is to look for the microfiber areas. When the keyboard is closed, the screen is entirely protected by microfiber cloth. Gives a nice bit of protection there.

The single biggest failure of Mac laptops (and probably all laptops) seems to be the propensity of the user base to spill drinks into the keyboard. I’ve done it, you’ve probably done it, everyone you know has done it. Pretty quick way to destroy a laptop. I don’t consider the iPad Pro a laptop replacement for most people but we will drink around them and we will spill liquid into the keyboard. The Smart Keyboard is actually water resistant which is a huge bonus. The keys are made out of a fabric covered substance (Rene Ritchie says it’s taffeta which just makes me think of Young Frankenstein) and they have no openings to allow water to get near the electronics. If a wave hits you from the side it could still go into the lightning connector or the speaker grills but other than that you’re well protected.

Now after all of this conversation I haven’t talked about what it feels like. I can say that I don’t like it as much as the Magic keyboard, and I don’t like it as much as the MacBook keyboard but I do like it. The keys are stiff, and the space bar especially seems stiffer than the other keys so I have to concentrate to get it to depress. I am really accurate with the keyboard and it works great on a desk. On the lap it’s kind of bouncy so it’s kind of annoying. It’s pretty light so that might be allowing it to bounce even more.

Speaking of the weight, I looked all over Apple’s site for the weight and couldn’t find it. I didn’t want to walk ALL the way downstairs to weight it myself so instead I hit the chat window to talk to a specialist at Apple. I have to say that Ashley was the least knowledgeable person I’ve ever talked to at Apple in my 30+ years of using the products. I asked her what the keyboard weighed, she went away for quite a while and then came back and asked me whether I wanted the cellular version or the wifi-only model. Um, what? I sent her a link to the keyboard so she could see what I was talking about. She apologized and ran off for a while to ask other people. Then she came back and proudly told me that it was 1.767 lbs. Ok…so the iPad itself only weighs a pound and a half and this weighs more than that? Use your head woman! That makes no sense. I left her holding while I went downstairs and weight it myself – it weighs 11.8 oz, or .73 lbs, making the two devices combined weigh 2.3 lbs. This is a bit more than my MacBook but heck, it’s also a bigger screen than my MacBook!

Back to typing on the Smart Keyboard. Remember how I said I loved the new trackpad feature in iOS 9? Well I sure miss it when I’m using the Smart Keyboard. I hate going back to pressing and holding on screen to move the cursor. I get why I can’t have both since there’s no onscreen keyboard when you use an external keyboard but I still miss it. You do get some great advantages that outweigh it though. You get the precious command key! Yes, command-x and command-v to copy and paste! You can command-tab to switch between open programs.

Another thing Command does is lets you go to Spotlight so you can hit command-space and launch or switch to any app you want without exiting the app you’re in first. They implemented a cool feature, if you hold down the command key in different apps it shows you what you can do with it. command-shift-H takes you back to the home screen but if you’re in Safari ti shows you that you can command-R to refresh, you can use command-F to find, command-T for a new tab, command-W to close a tab, command-L to go to the URL bar, it’s awesome!

Having such a capable keyboard on the iPad Pro has one weird downside to me – my brain is very confused that I can’t use my TextExpander snippets from the Mac. I know there’s a special keyboard you can get and there’s apps that support TextExpander but I really want it to work everywhere and until it does I just haven’t been able to get used to it.

Bottom line, I think I’d give this a B+. It’s a good compromise between weight and typing ability, angles for viewing vs. typing, and adding new functionality but losing other functionality. As I said the price is steep but I’m still going to keep it because it works well for me.