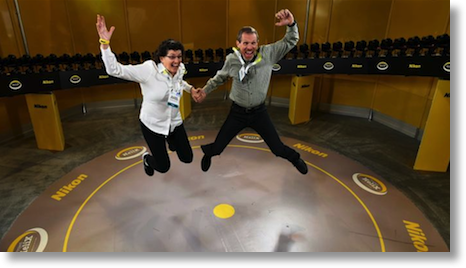 The first thing you need to know about CES is that everyone who attends has a completely different experience.

If you’re a vendor, it’s a grueling grind. You probably travel long distances (many vendors are non-English speaking Chinese people who must have had horrible flights over), you stand in a booth for 12 hours or more either hoping people will come by or dreading the hoards that come by.

If you’re a buyer, you’re making deals, having meetings, trying to get that best price. You’re in suites in the hotels grinding away at the reps for the vendors.

If you’re from one of the snazzier big booths, like a Samsung for example, you probably aren’t working the grueling schedule of the smaller vendors but maybe you have to be dressed up all day. There aren’t a lot of booth babes at CES (thank goodness) but I always feel sorry for them in their high heels and makeup and having to be on their best behavior all day – that would be really hard for me!

If you’re a big tech journalist, you’re reading all of the major press releases and trying to make your article sound unique but also to be first with the big news. You’re attending the big press announcements that take place long before CES ever starts. You’ve got deadlines to meet and shareholders to keep happy.

If you’re a worker bee at CES, you’re hauling hardware, rolling out carpet, driving a forklift, unwrapping plastic-covered displays, hanging lights from the scaffolding, or even playing fake volleyball during Pepcom in a feeble attempt to create the illusion of a summer beach party. Maybe you’re making drinks for an audience who are too busy to notice how hard you’re working.

I bring all of this up so you’ll realize when I tell you what CES was like for Steve and me, it’s probably not like anyone else’s experience. With that extended caveat I thought I’d tell you a few anecdotes so you’d get a flavor of what our version of CES was like.

We were lucky enough to be able to drive to Las Vegas in about 4 hours, arriving on Monday. Now you may have looked at the schedule and thought CES was Wednesday – Friday but those are just fake dates. The big press releases come out earlier and earlier so that by the time CES finally starts all the big news is known. 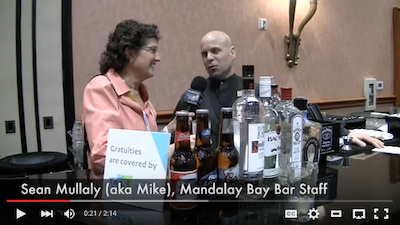 We were able to secure press passes, which gave us entrance to three press-only events. This confused me at first because I thought everyone was press, but evidently most people are not. Press events are really cool. They have maybe 100-150 booths in a big room and since the audience is limited, it’s much easier to get one-on-one time with the vendors.

These events are where Steve and I get most of our interviews. I mentioned the bartenders earlier – imagine a room with maybe 500 people in it, free mixed drinks with name-brand alcohol and there’s no line. One bartender told me that they were running out of soda and water. Turns out the press is pretty serious about getting the job done. We took our job very seriously, and in my quest to get the kind of interview no one else gets, I interviewed Sean the Bartender at the Mandalay Bay! 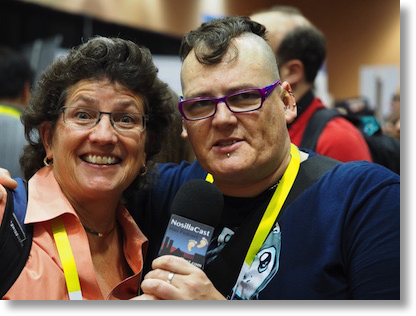 I enjoyed meeting people from TWiT and Daily Tech News Show whom I knew from the shows but hadn’t met in person. I stalked them all, of course, and made them take their pictures with me. I met Myriam Joire, Father Robert Ballecer, Dick DeBartolo, Jonathan Strickland, Iyaz Akhtar, and Robert Heron. I included a link in the shownotes to some photos of me bothering these folks.

Here’s a fun story. We started talking to a rep at Catalyst Lifestyles about their newly announced waterproof Apple Watch case and band. Nearly half the time we strike up a rapport with someone, they tell us they either can’t or don’t want to do the interview, that we have to either talk to some stuffy CEO or some flighty PR rep. We hate this, and I often cajole them into doing the interview anyway. But with Catalyst that didn’t work. The woman we were talking to insisted that we needed to talk to the CEO, June Lai.

At this point we find out that June flew from Florida to Dallas, had her flight cancelled, took a flight from Dallas to Phoenix, had to drive the 300 some odd miles from Phoenix to Las Vegas and then came to the booth to do interviews from 6 to 10pm. Clearly June was having a tough day. The other rep dragged her over to us and right before she got close, we saw a guy hand her a frosted martini. June had her lips halfway to the glass when the rep called to her. You could tell that she could just taste that lovely nectar sliding down her throat … only to have it pulled from her at the last minute.

Steve saw this and without discussion told her “why don’t you drink your martini before talking to us.” I don’t think I’ve ever seen a more grateful human being in my entire life. She went off behind the booth and in about 2 minutes came back and gave us a stellar interview. She was a professional who would never have asked for that allowance but she was also a human who needed that drink!

Here’s another interesting story. Frankie Smith of SureCall agreed to an interview about their antenna for boosting a cell signal in your house. I noticed Walt Mossberg, formerly of the Wall Street Journal and now of Re/Code, one of the pre-eminent tech journalists in the US. Steve and I started maneuvering into position so Steve had a good camera angle with the company logo in view and, as we started the interview, Walt kind of reached around behind me to pick up one of the units to inspect it and learn more. We did the interview with Frankie and eventually Walt wandered off. When we were done recording, I said to Frankie “Did you realize that was Walt Mossberg right behind me?” and he said “Sure I did.” My reaction was pure astonishment – I told him that I couldn’t believe he didn’t blow me off for such a huge name!

I remember years ago, I was about to interview Ge Wang, a professor from Stanford who was one of the developers of the iOS app Smule that took the world by storm that year. We had just started to talk when he suddenly dropped me like a hot potato … for iJustine. I don’t know what people see in her (she appears to be just a pretty face with no substance) but in any case, I was really disappointed in Professor Wang for doing that. In contrast, Frankie Smith of SureCall was a class act not dropping me for Walt Mossberg. I actually wouldn’t have blamed him if he had but I sure was impressed that he didn’t!

I’ll finish up this description of what CES was like for us. We went to the Nikon booth where they had set up 96 Nikon D750 DSLR cameras in a circle. The idea is you do something goofy, and they create a shot at just the right time that’s a full 360° view of you. We held hands like little dorks and jumped in the air. It came out really cool (for two little dorks) and of course there’s a link in the shownotes so you can spin us around and see for yourselves.

Oh, one more thing – we really enjoyed going to most of the events with Chuck Joiner of MacVoices, and a good bit of The Mac Observer crew including Dave Hamilton, John F Braun, Jeff Gamet and Bryan Chaffin. It’s no Macworld but it was fun to hang out with fellow Mac Geeks for the week!