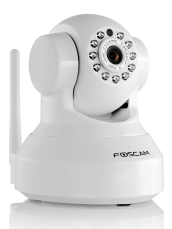 About four years ago, my son-in-law Nolan bought Lindsay a webcam from a company called Foscam so that she could watch her dog Dodger. She followed the instructions to set it up to a wired Ethernet connection and it worked perfectly. From her Mac or her iPhone she could control the camera, move it around and watch the room. The only problem was that her router isn’t in the area where Dodger hangs out during the day. No problem, the Foscam should work wirelessly as well. But for some reason she could never get it to work.

Over the years, every once in a while we poked around at it and gave up. But this weekend we went to see them again and I decided to attack it full force. I started with a wired connection so we could take it one step at a time.

It had been ages since we played with I had to download some stuff from scratch. The first was an app that would basically just tell us the IP address of the device. Open the IP Camera Tool, and one IP address would be shown, on the internal network. Lindsay has an Airport Extreme so the IP was 10.0.1.5.

Next they said to enter that IP address into a web browser, and it asked us for the user name and password. Like any good webcam, the username was admin and the password was blank. Good grief, no wonder you can scan the Internet and watch people’s children on their webcams! The interface suggested a password change but a) didn’t force me to do it, and b) didn’t tell me how to do it! I dug around and found a menu called “users” and in there I was able to change the admin password. Interestingly this webcam software from Foscam also allows you to add more users, and restrict their access to read only, not admin.

I was able to control the Foscam from my Mac with the camera on Ethernet, but Lindsay had that working earlier. I figured there must be somewhere in the camera settings where I’d have to tell it about Lindsay’s wireless network. When I found that section I realized why the wifi settings had never worked for her. Have you guessed it already? It’s the same thing that trips me up EVERY time we talk about Internet of Things devices being janky on a network. 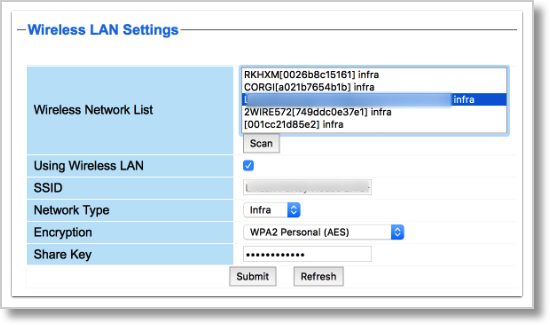 Just like the Wemo’s, Nests, and Rings we’ve talked about, the Foscam was looking for a dedicated 2.4GHz network and Lindsay’s Airport Extreme was set to combine the 2.4 and 5GHz bands, which is the default behavior. As soon as I separated the two bands by giving them different names, the Foscam was up and running. Lindsay was so happy!

The next trick was to figure out how to access the Foscam from outside the network. I figured this would be a port forwarding thing and I was right. I was able to go into the Airport Extreme settings, open a port and assign it to the internal IP of the camera. Next I used ipchicken.com to find out her IP address. I know there’s other tools but I just really like having a chicken answer that question. Now to get to her webcam from outside the network she simply has to go to her IP address, followed by a colon and then the port number. The good news is that it queries us for the username and password. I love how geeky Lindsay is, as soon as she connected that way she added it to her home screen on her iPhone.

The only thing left to do was to document everything I did using Clarify from clarify-it.com! I made her a beautiful PDF with annotated images and explanations along the way. I put in a troubleshooting section because I know her IP address will eventually change and that will confuse things. I know that there’s ways around that and that I probably should have set a static IP for the camera on her internal network but I had restarted their router and changed things so many times while I was there causing them to have to reacquire the network on their Macs, iPhones, TiVo, AppleTV…I thought maybe I should leave that exercise to next time.

I’m left with one lingering question. In theory routers like Apple’s Extreme combine the 5GHz and 2.4GHz bands by default into one name so that you don’t have to mess around with assigning devices to different networks. They’re supposed to just find the best network they can use. So why on earth do NONE of these Internet of Things devices ever find the 2.4GHz band unless I spoon feed it to them?

1 thought on “Yet Again the Answer is 2.4GHz Separation”