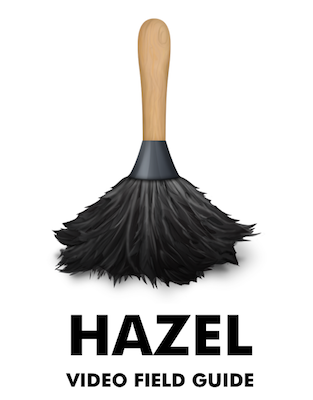 Pop quiz: would you rather go to the dentist, or scan in that giant pile of papers next to your desk? It’s a tough question, right? You bought that fancy pants scanner everyone was talking about a few years ago, and you committed to going paperless, and you probably bought some storage to file away all of the bills and such, but you still dread the actual job of scanning, am I right? Each time you finally go through them all, you swear to yourself that this time you’ll keep on top of it, this time you’ll do it once a week, this time you won’t let it stack up. And then three months later there’s that giant stack again.

David Sparks, aka Mac Sparky, co-host of the Mac Power Users Podcast, and good friend of mine, has been blathering on and on for years about how he uses Hazel to automate scanning of his documents. I have always meant to go watch some of his videos and read some of his tutorials to figure out how he does it and what’s so cool about Hazel, but I figured I’d never find the part about how to get started. I was afraid that going to his site might be like starting in an upper division calculus class when you forgot to take Algebra 1.

I even went as far as to buy Hazel and I figured out how to do a couple of cool things with it, but I still had a four inch stack of papers to scan sitting on my filing cabinet next to me.

This week, David published a Hazel Video Field Guide and sent me a review copy. This is two and a half hours worth of screencasts that starts with the very first baby steps of using Hazel. Once he gets your feet wet, he adds more and more complexity but does it in a way that’s memorable and clear. He hits the main objective pretty quickly and that’s how to have Hazel automatically rename your files and put them away in your folders without you lifting a finger, other than gently guiding the documents into your scanner.

I probably should explain a little bit of what Hazel actually is, and how it works. Hazel is a System Preference pane for the Mac that allows you to automate processes involving files and folders. Hazel 4 costs $32 from noodlesoft.com and they have family pack licenses and generous upgrade pricing as well. That turned into a good thing for me since I’d bought it at version 3 and never exercised it.

In the Hazel preference pane you first define a folder that you want Hazel to watch, then you create rules on what you want it to do. In the Hazel Video Field Guide, David shows off one of the powerful new features of Hazel 4, which is the ability to recognize dates inside a PDF. If you scan your documents using an app that applies Optical Character Recognition, or OCR, Hazel will find the date, define a variable using that date, and then rename the document using that date. So, for example, instead of scan001.pdf, Hazel will rename it to 2016-05-10 Gas Bill.pdf. David goes on to show how to have Hazel move the file to your gas bill folder.

David builds the rules up a step at a time, shows you how to test the rules and how to diagnose when they go wonky because you made a mistake. If you haven’t listened to David before, you’ll find that he’s clear and concise, but also throws in regular doses of silliness to keep you entertained.

I watched the first hour of David’s Video Field Guide on Hazel at the gym one day this week and I was so excited I came home and grabbed that giant stack of paper and got to work making rules. David’s instructions were so clear and Hazel is such a good tool that I was able to build them without ever referring back to the video. I can’t say I got every rule right the first time, but it was so much fun figuring each one out.

I spent about four hours working on six months worth of papers, but it was 3.5 hours of writing rules and learning and only about a half hour of scanning. The next time there’s a bill waiting to be scanned, all I’ll have to do is stick it in the scanner and watch it magically get renamed and sent off to the folder on my Drobo. I’m actually pretty excited about doing scanning now, so that sure says something for David’s Field Guide.

But David doesn’t stop at just renaming and filing scanned documents. He shows you how to get Hazel to tell you that you have overdue bills, he sets up Automator scripts that are called by Hazel to set up a new folder structure, how to have Hazel pull in receipts from your iPhone to be sent to your accountant, how to send music to iTunes and images to Photos, how to have Hazel keep your desktop neat and tidy. He even shows how to create files that are automatically destroyed after a certain amount of time, using the example of sensitive documents sitting in your Dropbox for too long.

The content is great in David’s Field Guide and it’s made me a believer in Hazel. When I first downloaded David’s Field Guide, it came into Dropbox on my iPad and viewing a video from there doesn’t give you access to the chapters. With a video that’s over 2 hours long with tons of discrete chapters, that’s a problem. If you download the Video Field Guide to your Mac, and import using iTunes to your iPad through a cable like an animal, you can get to the chapters. If you just want to view it on a Mac, QuickTime sees the chapters just fine. Makes it super easy to jump right to a section you want to go over a second time.

I don’t think there’s an easier or more pleasant way to learn to use Hazel than to let David Sparks spoon feed it to you. The Hazel Video Field Guide is available over at macsparky.com/hazel where you can buy it for $20. After you learn all of his tricks with Hazel, you’ll like scanning WAY better than going to the dentist!