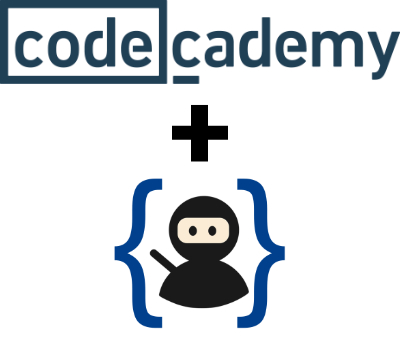 Bart Busschots has been working on a series in Chit Chat Across the Pond entitled Programming By Stealth, and we just finished episode 18. These lessons started with HTML, then moved into CSS, and since episode 12 we’ve been learning JavaScript. Bart has written terrific tutorials with excellent explanations of the terminology, logic and process of coding in JavaScript. The foundation he is laying is adaptable to learning other languages as well.

A few lessons back I suggested an enhancement to the series. At the risk of being labeled as teacher’s pet, I asked him to assign homework to us, or as he likes to call them, challenges. He came up with the challenges, but they’ve been really hard for me.I’m lucky because often, even with our time differences, Bart has been around to help me with my homework. When he’s asleep, it turns out Allister Jenks is awake in New Zealand. He’s not a JavaScript expert but he’s a programmer and has been working along with Programming By Stealth as well, so he’s been a great help.

There’s also a programmer named Jill Ramonsky who’s been following the series and she’s been helping me too. She writes these wonderful, long emails where she targets things she’s heard me not understanding. It’s great because a) she’s a fantastic writer, b) she’s very knowledgeable, and c) she brings a different perspective to the same topic.

But it wasn’t enough. To be honest I’ve still been struggling with the homework. I think I figured out why. It’s not that I don’t understand the logic. It’s that I haven’t had any practice. I can read the code Bart writes, and understand his explanations, but I can’t write it myself. It’s like taking a French class where you’re never given the opportunity to try to speak it yourself.

The challenges came late in the series (because we didn’t think of it), and challenges are too advanced for me. They’re complex problems. And I can’t even write a “for” loop on my own without it being riddled with typos! I don’t know when to use a round bracket versus a square bracket versus a squirrely bracket. By the way, they’re not called that, I just call them that to irritate Bart. I’ve been calling them that so long I actually don’t remember what they’re called!

This week I found the solution to the problem. I started going through the lessons on JavaScript at CodeCademy.com. In the first three days I worked in CodeCademy, I went through 25% of the lessons. I stayed up late doing them. I skipped watching TV to do them. They’re so much fun! 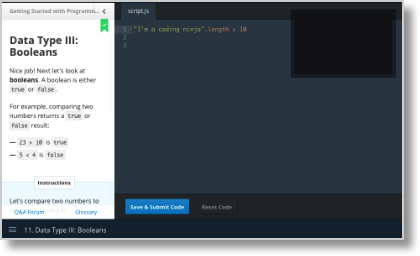 CodeCademy starts really really slow and takes teeny tiny baby steps. Just like Programming By Stealth, they provide a playground where you type the code. Then you push a button, the code runs, and you can see the output. If it failed to meet the objective you get a message explaining the failure. If it succeeded, you get congratulated. This instant feedback on the smallest bits is exactly what I needed. I’m even getting the hang of all those brackets now.

Like any good training program, it’s filled with encouragements. You get little badges (I’ve got a 50 lesson badge already!), and the text pops up little happy messages to tell you you’ve succeeded. If you get stuck, there’s a hint area you can reveal to help you get over the hump. I only had to use it once so far and I was glad to see they didn’t just show me the answer, it really was just a hint.

Bart started going through the lessons too just so he could see what they were teaching and how they were teaching it. He of course flew through it during a lunch hour, but he was pleased to see that they only used one piece of terminology different from what he’s teaching. He even discovered that CodeCademy used the same example he did, a challenge called “FizzBuzz”. He says this is a challenge that’s often given in programming job interviews as a way to test to see if someone is faking the interview. He says it’s not hard but it does weed out the fakers. I hope to be able to fake a job interview after doing that challenge!

Clearly, one reason it’s so easy for me to do the CodeCademy JavaScript class is because the explanations are already very familiar to me because of Bart’s instruction. Reading CodeCademy is like a refresher course for me. The main thing it gives me is the hands-on practice I needed. It’s fun, it’s easy (so far) and I’m really feeling much more confident that I’ll be able to tackle Bart’s challenges.

Bart is going to take a breather on Programming By Stealth because we’ve finished learning the language components, and to give me time to go through CodeCademy and get the practice in that I need. He’s also written up some smaller challenges himself over at bartbusschots.ie/… for us to take on as well.

If you haven’t been following along with Programming By Stealth, and wish you’d started at the beginning, or if you have been following along and you’re struggling like I am, then I highly recommend giving the free CodeCademy a try over at codecademy.com. If you want more quizzes and instructional materials, you can sign up for a pro account but so far I think the combination of CodeCademy and Programming By Stealth will work perfectly for me.