While I was working on my review about 1Writer I noticed something very odd happening. Every time I tried to write the word starting with leading caps “The,” it would change instantly to all lower case. That meant I couldn’t start sentences with The or There. I had just enabled TextExpander so I thought maybe it was something in my snippets but I couldn’t find anything like that. Plus this was only happening on my iPad Pro and not on my Mac.

I contacted Smile, one of the greatest developers of all time, and makers of TextExpander. Within an hour or so, Jeff from Smile got back to me. He and I went back and forth a half a dozen times trying to diagnose the problem. I made him a video using ScreenFlow with my iPad connected to my Mac, I sent him screenshots, he sent me deinstall/reinstall/restart instructions and we flipped every switch we could find, but the problem persisted.

He then asked whether I would consider installing a diagnostic app on my Mac that would let him look at the system logs for the iPad. Would I??? You betcha, that sounds fun! The Mac app is called iOS Console from lemonjar.com.

I downloaded and installed iOS Console on my Mac and was happy to see that it was from a signed developer. I figured I could trust my new little friend Jeff to steer me the right way but you can’t be too careful, right? Anyway. I plugged my iPad into my Mac, launched iOS Console and instantly the app was flooded with diagnostic information. 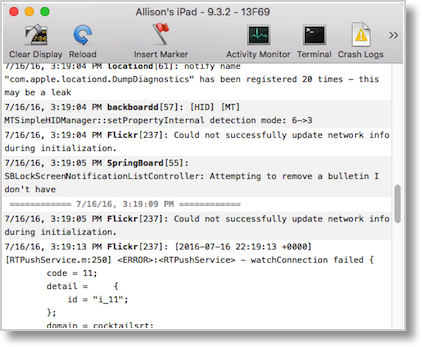 If you haven’t ever looked at the Mac Console, which is in Applications/Utilities, you really should open it up and take a look. If you’re like me, little of it will make sense but it’s fascinating. If you have run the Mac Console before, iOS Console will look very familiar to you. In the main body you can see the day and time stamp followed by the process name and ID, and then with an explanation of what it found.

An essential step in diagnosing a problem is to have a clean slate, execute the steps that cause the problem and capture the diagnostics. iOS Console, like the Mac Console, has a clear display button for that purpose. Another way to keep track of where you started a new task without clearing the data is to use the Insert Marker tool.

From the toolbar of iOS Console, there are buttons to launch the Terminal and Activity Monitor, but I’m not sure what value those have because neither of them have access to the iOS device. The last button is to see the Crash logs. I had no idea that crash logs are stored on my Mac for all of my iOS devices. They’re buried in User/Library/Logs/CrashReporter/MobileDevices. Very useful to know that they’re there, and even better that with iOS Console I don’t have to remember where they are!

Of course iOS Console includes a search string function so you can search for the name of the app or process that’s giving your device fits.

The only problem with apps like iOS Console and the Mac Console is that you find yourself looking at these terrifying errors and you start to think catastrophic things are happening all the time! For example, I got one that said,

failed for URL: "cydia://package/com.yahoo.package" - error: "This app is not allowed to query for scheme cydia"

Turns out something was cranky in the Flickr app but it was no big deal. You can make yourself crazy if you look at everything!

I was able to grab the logs and send them to Jeff at Smile for him to diagnose my problem … but they didn’t give him any good info. The good news is that he and I kept working on this until we discovered that one little snippet from the TidBITS Auto Correct library that’s supposed to change THe into The was causing the error on the iPad. We don’t know yet why it didn’t break the Mac and why it did the wrong correction on the iPad, but at least it’s fixed from my end. It’ll probably keep Jeff up at night wondering though!

The POINT of the story though is that iOS Console is a terrific tool to run diagnostics on your iOS devices. It’s free to download and run but $14 to purchase. It’s the old school Shareware model, remember that? If you use it, buy it! Go check it out at lemonjar.com/….