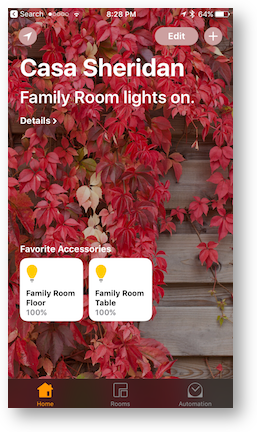 When the Hue Light system came out a few years ago, Steve really wanted to dip his toes into the home automation fun. We got the Hue Hub and plugged it into our router, and installed the three bulbs into a few lamps. It was pretty much a party trick, changing the colors from white to red to blue to mess with each other and guests in our home.

When the SyFy channel connected the TV show The Expanse to Hue, Steve was thrilled to have something for his Hue bulbs to do. It’s actually a pretty cool use. The lights change according to what’s going on during the show – dark and creepy in dark and creepy scenes, bright in brightly lit scenes. He loves it.

But like most people, we’re getting pretty worried about IoT security. Even though we had the Hue bridge and bulbs on our completely separate, dedicated router from our real computers, and even though we have NAT-PMP turned off, we still would rather be more secure.With iOS 10, Apple finally introduced a centralized tool for managing your IoT devices called Home. We knew that Hue had come out with a new version of their hub that was HomeKit compatible and would let us use our existing bulbs so this seemed the right time to dip our toes a little deeper into home automation. Now our Hue devices could play on the big girl network and we’d be super secure because of the hardware encryption. Plus, with Apple Home as the interface, we knew that we’d have a simple and easy way to configure the device.

Well, that’s not exactly how it worked out.

Let’s start at the beginning, skip most of the middle gory bits and then circle back to the end of the story. I bought Steve the new Hue bridge as a present and he was super excited to set it up. We fight over things like this but it was HIS present so he got to do it. He unplugged the old hub from the Airport router, and plugged the new hub into the Netgear X8, 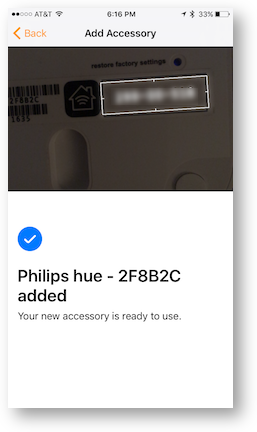 He launched the Hue app and while it could still see the hub, it couldn’t see any of the bulbs! Steve went off to the Googles and discovered that to switch hubs, you must NOT unplug the old hub until you’ve transferred over from the old hub. Oh good grief. He tried to back up in the process but he got frustrated after an hour or so and gave up.

Fast forward a couple weeks until this week when I decided to take another run at it. After a bunch of poking and prodding and resetting I got the two hubs to talk to each other and transfer the data from one to the other. This data is merely the name of the three lights, and the name of the hub. Maybe Steve’s Hue user account is in there somewhere, too. The two devices blinked lights back and forth at each other as though they were transferring terabytes of secret information and finally finished.

Now the Hue App can see the new Hue hub and it knows the names of the bulbs. I was even able to blink them on and off during the setup. Ok, great. Back to the Home app.

Around this time I discovered that once you declare a Home with the Home app, the Apple ID of the user who originally set it up owns the home. The owner can invite other people into the Home though, so I used Steve’s Home app to invite me by my Apple ID. Ok, great. Except when I tap on Add Accessory, Home doesn’t see the darn Hue hub! You have got to be kidding me!

After even MORE Googling and fiddling around, I reset the Hue bridge by poking a paper clip into its reset button and FINALLY the Home app could see the bridge again. 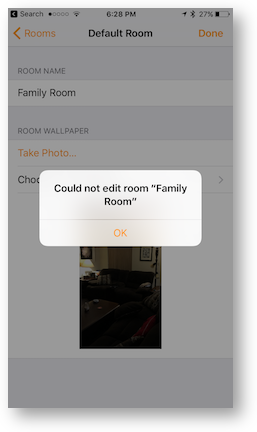 So let’s just say that all of this pain and anguish was because the Hue hub transfer was problematic. I can get on board with that. We’ll blame Hue. But after I successfully added the Hue to Home, it came up telling me that additional setup was required and I had to go back to the manufacturer’s app!

I don’t even remember what voodoo I had to go do over on the Hue app but eventually I went back to the Home app. It now showed my Home with two bulbs in “default room”. I tapped on Rooms changed Default room’s name to Family room. I took a photo of it like it invited me to and I tapped Done. Home then said, “could not edit room ‘family room'”. What the heck??? Then why did you give me a gosh darned field where I could name it that???

Ok, FINE. Default room it is. I went to Rooms, and tapped on one of the bulbs and the light went off. Ok, tapped it back on. Then for some reason it occurred to me to force-press on the light. That popped up a new screen saying 100% brightness and an option to change the color or go into details. Details sounded fun. In there I found I could rename the light, and guess what else I could do? I could change the name of the ROOM!

The only thing I can figure is that default room is just where things land when they come into your Home, and then you have to move them to a new room. So renaming default room didn’t make sense. I guess.

Anyway, I’ve spent about 4 hours on this darn thing and I’ve just gotten to the point where I can turn my lights on and off with HomeKit. Now I’m hoping to finally get to spend some time actually finding out what you can do with HomeKit. And figure out how to get the Apple TV to talk to it so I can control my home from outside the network. That’ll be fun I’m sure.

I really thought that using the Home app from Apple to manage our home automation would make all of this nonsense easier but it seems to me that it made it even more complicated than it was before. Now instead of one app with too many fiddly bits, I have two apps with lots more fiddly bits. If two engineers with masters degrees find that Home didn’t make things easier, I’m not sure how normal people will ever get this stuff to work.

5 thoughts on “Not Sure HomeKit Makes Home Automation Easier”