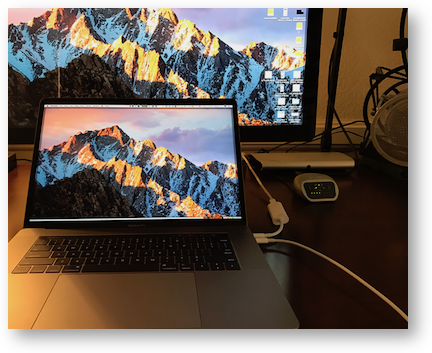 Six years ago I splurged and bought myself a 24″ Apple Cinema Display. I loved that display. It was huge in that day and worked perfectly with my 2011 MacBook Pro. In 2013 I upgraded to a the fancy new Retina MacBook Pro, but something weird started happening. Fairly frequently, the monitor would blink off and then back on again.

I took the new Mac and the display into Apple (which is a lot to carry) and they checked it out. Nothing wrong with either device but the genius found documentation that there was a firmware issue between the two devices. He suggested that I give it a little while and I would be pushed the firmware update. I know I live on the bleeding edge and this is the penalty, so I was cool with it. At first.A month later I contacted them and got the same answer. Another month. Another month. Finally after about three months of have a seizure-inducing blinking happening I pushed up to the highest tier support I could find and suggested that they had to give me a better solution. With four thousand dollars worth of equipment on my desk I should not have to put up with this.

They finally agreed and shipped me out a replacement monitor. Tragically the 24″ was no longer available, so I was forced to accept the 27″ version. Anyway, the 27″ they shipped me was the last of the display port Apple displays, even though the new Thunderbolt displays had been announced. I couldn’t really complain as I was getting a brand new $1000 monitor and I was even able to put it under AppleCare.

Fast forward to last week when I upgraded to the new Touch Bar MacBook Pro. I bought the USB-C to Thunderbolt adapter, which is the same form factor as the mini-display port connector on my display, so I plugged in the monitor…only to discover that the new MacBook Pros cannot drive a display port monitor. (See Apple support article HT207266.) I had gotten an early warning from someone about this (forget who but they cited Katie Floyd’s post about it), so I wasn’t shocked it was true but I was sad.

The story isn’t all gloom and doom though. A couple of years ago I got rid of the nasty Dell display I’d originally given Steve and replaced it with a 27″ Thunderbolt display. According to the Apple support article, his monitor should work with my new Mac. We brought my monitor into his office and connected it to his 27″ iMac, and he said he couldn’t tell the difference, so he graciously agreed to swap with me.

He isn’t running any Thunderbolt devices hooked to it so really the only change was that he had two useless cables hanging off of it instead of one. Both monitors come with a chimera – the Display Port version comes with power for the Mac to charge, display port and USB but the Thunderbolt version only needs power and Thunderbolt since USB can travel over Thunderbolt.

We swapped the displays and instantly I was back in business. Do I have an awesome husband or what?

As I’ve mentioned earlier, when I ordered my new Mac I bought a few dongles. Let’s be clear here, I’ve had to buy dongles on every laptop I’ve bought in the last six years. I’ve got VGA, DVI, HDMI with all matter of connectors on the other end. With USB-C I added two more USB-A dongles, one for Ethernet, and one for Thunderbolt.

I plugged in the power adapter, the monitor to Thunderbolt, my USB 3 hub, and my mic interface to the fourth USB-C port via USB-A. After unplugging and plugging them back in a few times, I realized that it’s somehow more tedious to unplug and plug back in four USB-C cables every time I want to use my new Mac than it was with my old Mac. I told Steve I was going to have to buy a dock for this thing because it was driving me nuts.

The audio out port came as a welcome surprise. Even though the 2016 new MacBook Pro does come with a headphone jack, that’s one more thing I have to plug in every time I do a podcast recording. Now I can keep my headphones plugged into the dock and any time I need to monitor my own voice or hear someone on Skype, they’re already ready to go!

I did have to figure out what macOS would call the headphones when they’re not plugged into the headphone jack direction but rather though the Thunderbolt dock. macOS decided to name the headphone jack on the dock USB PnP Sound Device. Once I discovered that I was back in business. I will have to remember to switch to it when I want to monitor audio since my headphones will always be active, but that’s easier than plugging and unplugging all the time. Plus there’s the added bonus of how I’ll be confused during the Live Show because something’s changed!

Now I’ve got the Thunderbolt dock tucked away sort of behind my monitor with all the cables hanging down behind my desk, and just two cables coming to my Mac, Thunderbolt and Power. I think I’ll ask for a second power supply for my new Mac so I can have the cable thrown backwards with all the others and have one for traveling around. Then things will be super clean.

Last week I mentioned the one thing I didn’t like about the default Touch Bar controls was that I had to tap twice to change volume or screen brightness. I know, I’m a whiner, right? Anyway, Giles Croft shot me a tweet where he pointed to a great video by Jason Snell of Six Colors where he demonstrates the Touch Bar. One of the first things Jason shows is that when you tap on the volume or brightness, you can immediately slide your finger left/right and it brings up the slider and starts adjusting for you. Brilliant! Thanks so much Giles!