In March of 2013 I finally got on the bandwagon of doing offsite backups. Backups in general are the kind of task that sounds hard and annoying but if you haven’t tried lately are easy. Once I had CrashPlan running, it ran flawlessly for three and a half years.

One of the features I liked about CrashPlan is that when you get a new machine, they allow you to adopt the previous backup. That means that you don’t have to re-upload all of your data, you just tell CrashPlan to point the old backup to the new machine.

Fast forward to November of last year when I got the new Touch Bar MacBook Pro. I happily installed CrashPlan and told it to adopt the backup of my 2013 Retina MacBook Pro. And that’s when the nightmare started. 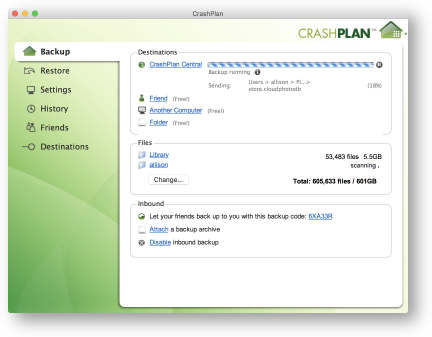 I failed to get CrashPlan to complete a single successful  backup on my new machine for a full month.  On December 28th I  finally wrote to Code42, the makers of CrashPlan. My little friend Lawrence from Code42 and I began a long and stressful relationship. To give you an idea of how many conversations we’ve had trying (unsuccessfully) to get this working, I copied and pasted our email thread into ByWord and found we have written 9450 words to each other … so far.

When Lawrence was helping, he seemed to know what he was talking about and do some real work. He was trying to clean out files that appeared to be boogering up the database (my words, not his) and doing other maintenance that required me to uninstall and reinstall. Even when things appeared to be working, CrashPlan would upload at a positively glacial speed. I’m talking 300KB/sec on a good day. He would assure me that it would speed up eventually and the screens that said “3.4 months to go” weren’t correct. I have around 700GB online at CrashPlan, so at the speed of 300KB/sec, that would be 216 days to complete (if my cipherin’ is correct).

But the worst part of all of this is that twice Lawrence fell ill. Worse for him than me, I’m sure. But CrashPlan had no one reading his email to ensure that his customers were cared for! At one point, 8 days went by with no response from my repeated attempts to ask him what was going on. Finally in desperation I tweeted Code42 simply asking them to check to see if Lawrence was ok. Seriously, I wasn’t mean at all, I really wondered if he was ok.

After that tweet, Donny stepped in for a few days at which point Lawrence and I were reunited. As I explained to both of them, I think it’s inexcusable for a company to leave a customer unable to use the service for which they’re paying just because the one person they were working with was out ill.

But here’s where the story takes an interesting turn. My good friend Pat Dengler of Dengler Consulting has been nagging me for ages to dump CrashPlan in favor of Backblaze. In her Apple Certified consultant’s role, she’s found it easier and better than CrashPlan and highly recommended it.

So while I was waiting for Lawrence, this week I downloaded the free 15 day trial of Backblaze. I told Pat that I was doubtful this would be enough time for a real test, because in 2013 when I did my initial backup to CrashPlan, it took 3 weeks for all of my data to go up to their servers. I soldiered on with my testing in spite of my concerns. 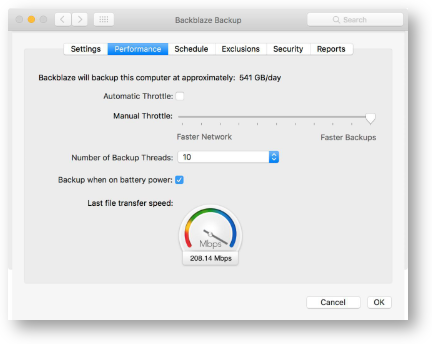 Where CrashPlan is a Java application (which is inaccessible by the way), Backblaze installs as a System Preference pane. It has six tabs within it and my favorite is the Performance tab. By default, Backblaze has automatic throttling. You can imagine that if you’re trying to watch Netflix, you probably don’t want your backup sucking up all of your available bandwidth. But in my case I actually do want to flood the pipes.

If you disengage automatic throttle, you get a slider from left to right with faster network on the left, and faster backups on the right. Needless to say, I pushed it to 11. You also get an option to set the number of backup threads. They recommend 1 thread, but since they gave me an option of 10, I chose that.

At this point, I should mention that I’m lucky enough to have FiOS in my house, so I regularly see 80-100mbps upload on speed tests. After I cranked up Backblaze to the fastest possible, I was shown a transfer speed of 208.14Mbps. Remember CrashPlan? That was at 2.4mbps. So 100x the speed. But could Backblaze really do this in an actual upload?

I deselected only my Movies directory and which left it close to 650GB to back up to the Backblaze servers. And I pushed back up now. I left it running in the background, fully expecting this to take weeks. But it didn’t. 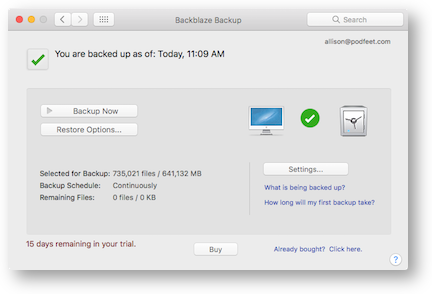 Instead….it only took Backblaze 18 hours to upload 641GB of data. 735 thousand files. Seriously. It finished in far less than the elapsed time between any of my requests to Lawrence to receive a reply.

The entire time it was uploading, it showed me what file it was working on and how many files were left and how much data was left to upload. Great feedback so I knew exactly how well it was going.

The system preference pane for Backblaze also has a schedule tab which you can change from continuously (which they recommend) which is actually hourly, or you can choose once a day, or only when you push the backup now button. You can use the Exclusions tab to keep Backblaze from backing up specific folder, or even by file extension type. There are a fair number of file types not included by default. For example if you have sparse image bundles or you save disk images of installers, those aren’t backed up. Probably good to take a look at that section to make sure nothing you care about is in the list.

On the security tab, they outline their default security:

Files scheduled for backup are encrypted on your machine using AES military grade encryption. These encrypted files are then transferred over a secure SSL connection directly to the Backblaze data centers, where they’re stored encrypted on disk. Data will only be decrypted per your request using your email and password. 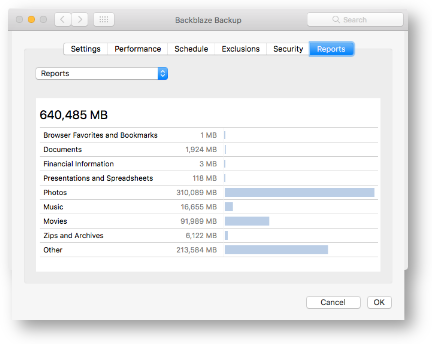 Finally they have reports that are really fun.  I can see how many files I have backed up, and a high level understanding of their final types. For example, it shows that I have 400 GB of photos and movies, and only 16 GB of music. And to be honest, I’m pretty sure it’s mostly podcasts in that music category, stored in my iTunes library. In that same report tab you can also check to see if there are any issues pending for your next backup.

I also ran a successful test to make sure I can retrieve files. You log into your Backblaze account on the web, identify the files that you want to retrieve, and then they zip them up and send you a link to download those files. Zip file downloads are limited to 500GB (which is probably enough for most normal people), but if it’s not you can submit up to 5 concurrent.

If you have a medium-size catastrophe, up 128 GB GB of data you need to retrieve, you can choose to have them send you your data on a USB flash drive for $99. If things really go belly up on you, they’ll send you up to 4 TB of data on a hard drive for $189. Get this though, if you send the flash drive or the hard drive back, you get a full refund. That’s pretty cool.

For a single computer, CrashPlan and Backblaze are the exact same price. If you pay for a full year in advance, they both charge $5/month. CrashPlan has one edge over Backblaze, and it’s that they also offer a family plan. You can back up 2-10 computers for $12.50/month. Backblaze doesn’t offer a family plan, so if you have a lot of computers for which you require offsite backups, CrashPlan would be a better deal for you. CrashPlan also allows you back up network attached storage, which I always thought I’d do but never even tried. Backblaze recommends Synology NAS because they have their Cloud Sync software which syncs to Backblaze’s B2 service.

Needless to say, I’m switching over to Backblaze because of the nice interface, and because of the speed, and well, mostly because they actually can back up my computer.

15 thoughts on “Why I Switched to Backblaze from CrashPlan”