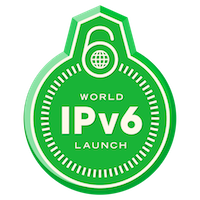 I made a deal with Bart when he started his two podcasts Let’s Talk Apple and Let’s Talk Photography that he would never have to be on more than every other week. But this week I tricked him by asking him if he’d come on and explain IPv6 to me. His first answer was that he didn’t understand it well enough to explain it. But of course Bart being Bart, that ear worm I so carefully placed caused him to go out and study it and now he’s here to explain it to us. And of course below you’ll find his excellent show notes.

As we learned on TTT, the TCP/IP networking model has 4 layers:

To make it easier for IPv4 traffic to pass over IPv6 networks, a prefix has been reserved for IPv4 address onto IPv6 addresses. You start with 80 bits of zeros, then 16bits of ones, then the 32 bits of the IPv4 address. In other words, the prefix is ::ffff:. For convenience, the last 32bits are usually not written groups of 4 hexadecimal digits, but as a dotted quad.

To send IPv6 traffic over IPv4, you need to set up a tunnel. Think of this as being analogous to VPNing.