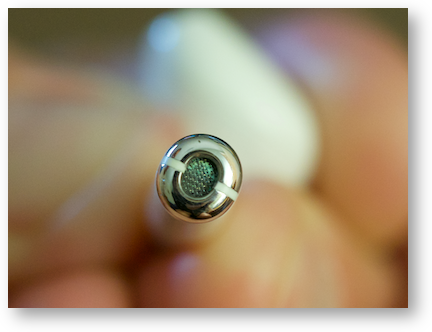 Last year before the new iPhone 7 came out, all four of the iPhones in use by my family were suffering from the battery shutdown problem. Kyle was getting a new iPhone 7 from me for his birthday but I asked him to take his iPhone 6 into Apple while it was still under AppleCare to try to get it replaced. Apple told Kyle there was nothing wrong with the battery and refused to replace it. They said to do a DFU (Device Firmware Update) and to not restore from a backup and that would fix it. They were certain that there was something in Kyle’s apps or data causing the problem. We know from recent reports that Apple is now admitting that something was indeed wrong with the OS that was causing the problem and they’ve been able to measure a decrease in the problem from a recent iOS update.

But before that information came out, and after Kyle got the iPhone 7, I loaned Kyle’s iPhone 6 to
my friend Ryan. Ryan did a DFU restore, and put his own data on it and the phone continued to shut down when it got to around 20-30% battery left.

When Ryan gave the phone back, I took it into Apple and told them the story and suggested they replace the battery in the phone. They listened to me, and tried to tell me it was out of warranty (which it was on that day). I patiently explained to them that we brought the phone in under warranty and they should be able to look it up. They found that information and then the tech said something really weird.

He said, “Ok then, how about we meet you half way? We’ll split the cost with you.”

If you ever hear these words you know the negotiation has begun. I suggested that since their hardware failed under a warranty I had paid for, I was completely uninterested in meeting them halfway, I expected them to respect the warranty.

I won’t bore you with all my techniques, but in the end I got the phone’s battery replaced for free.

I told you that story to set the stage for a new story. Remember those words, “We’ll meet you half way”.

Steve bought me the AirPods the day they came out and I’ve been loving them. AirPods live in a small case that’s also a battery which charges the AirPods. The case itself charges via a lightning connector on the bottom. Each AirPod has its own battery and when you open the case, your iPhone shows you the charge of the case and each AirPod.

When I go on my long walks, I pull the AirPods out of the case, and since my purse is right next to the charger I plug the case in. My case is rarely under 60% charged, and the headphones are always 100%. But a couple of times recently, while I’m out on my walk I heard one of the AirPods signal that it was low on battery and then die. It happened twice on the left side, and then once on the right side. Three times is a pattern so it was time to return the AirPods for a replacement pair.

I was running short on time before the vacation so I thought calling AppleCare first to get clearance would speed things up. I rang them up and in just a few moments got the clearance for a replacement. The tech told me he’d email me the case info and told me I only needed to bring in the case and the AirPods to get the replacement. He offered to make me the appointment and I agreed.

When I arrived at the Apple Store, they didn’t have an appointment for me but asked if maybe I was Steve Sheridan? I think since Steve bought me the AirPods, they put the appointment under his name, so I agreed that I was, indeed, Steve.

A tech named Cas took care of me, and you’ll notice I did not call him my little friend Cas. He looked in the end of the right AirPod where a little steel ring makes contact with the case to charge, and told me that he saw something blue, which means I must have gotten them wet.

I explained that I had not gotten them wet, yet he insisted he saw water damage. I explained that AppleCare had already approved the exchange and he said that the guy I talked to did not document that so he would have to call AppleCare himself. He went off for quite some time, so I asked for a manager and got my quasi-little friend Ben. 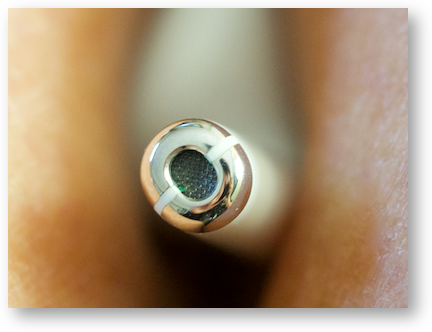 Ben and Cas told me that it was out of their hands, that since there was obviously water damage in the right AirPod, they couldn’t replace it. I explained again (getting less and less patient as time went by) that I did not get these wet. I explained that I have on many occasions dropped other iDevices in water and that I have confessed every single time. They insisted I had gotten them wet.

I (even less patiently) asked them why the left AirPod had failed twice, if the right AirPod was the one supposedly damaged. I asked how they knew it wasn’t the case itself that was failing.

And then guess what they said? You got it, “We’ll meet you halfway.” Yup, the exact same words I heard about the iPhone 6. They offered to give me a new case and a new left AirPod but that I would have to pay for the right AirPod at a cost of $69.

Now this was not a matter of the $69, it was a matter of Apple selling me a product, it failing well within the one year warranty, and them refusing to replace it when it failed.

I was getting pretty angry by now, and it was exacerbated by the fact that we had our friends Diane and Bill coming over for dinner and I was going to be late getting home to greet them. I stormed out.

But this is where things get interesting. Diane and I started talking about the problem and she and I took a close up photo of the AirPod that supposedly had water damage, We did indeed see tiny blue crystals kind of growing out of the minuscule grill on the end of the headphone. And that’s when Diane made a brilliant observation. She said that since we know it’s not water damage, couldn’t that same blue corrosion be the battery itself leaking?

Excited, the next morning I called my little friend Ben. I knew the one way to bring him on board with my program. When he answered, I said, “Ben! I know how we can both be right! Have you ever opened a piece of electronics to discover that the battery had leaked?” He was actually excited, acknowledging that this could definitely be what happened. We were both happy that neither of us were idiots or liars with this solution. He suggested I call AppleCare, explain the problem and make them document that I was allowed to get a replacement. He said he’d be standing by for me to come in and swap them out.

Steve suggested I get a good photo to show to AppleCare. I used my big girl Olympus OM-D E-M10 with my wicked cool macro lens, while Steve shined a light into the tip. Indeed we could now clearly see the blue crystals. They were growing out of a very small cross-hatched grill. Here’s something even more interesting: the left AirPod also had blue crystals, but the area of corrosion was much smaller so was easily missed by Cas’s young eyes. 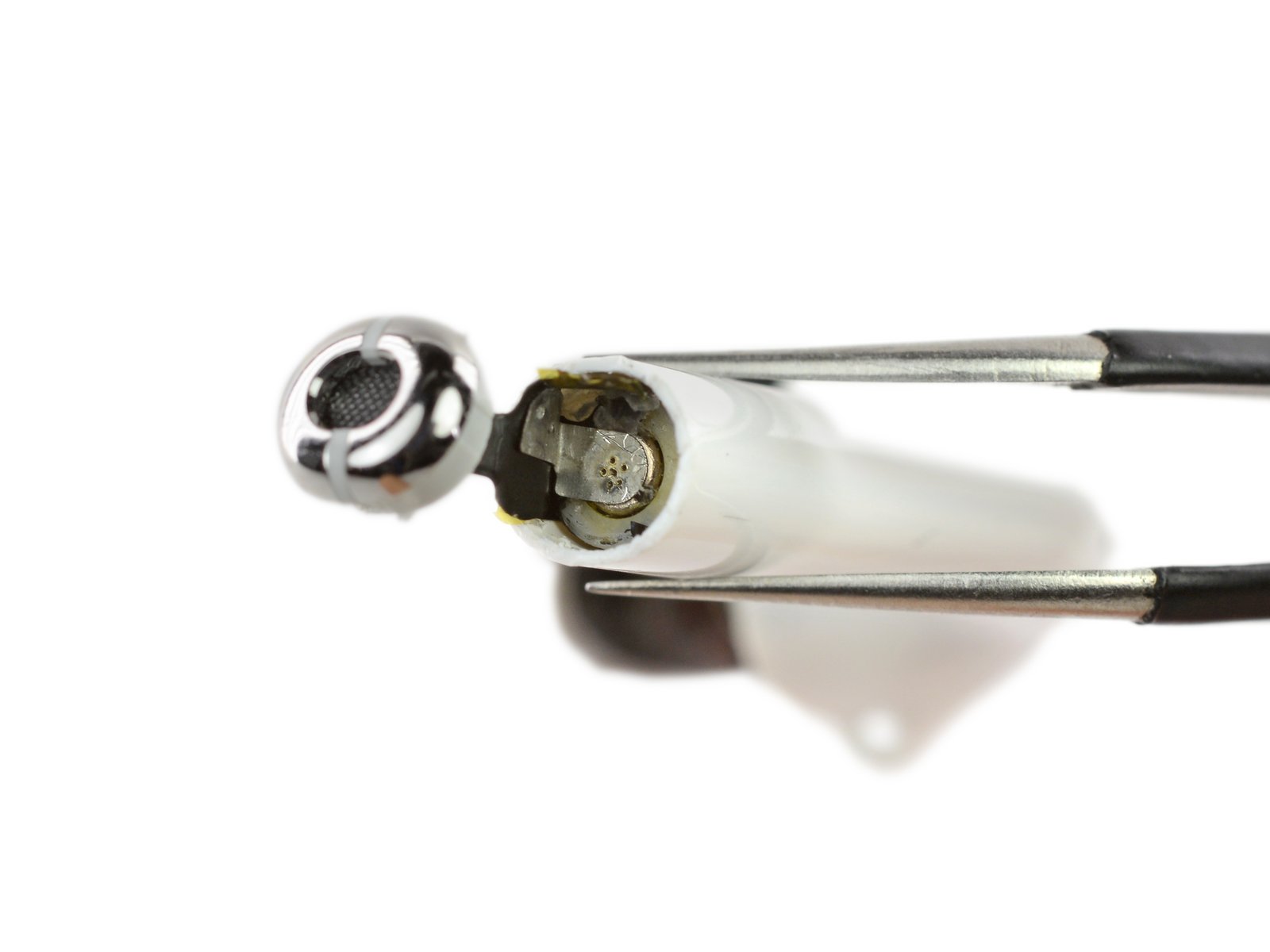 I took a look at the iFixit teardown of the AirPodsand they explained that the little grill was over the microphone, and showed that the battery was indeed right behind it. I put a link to iFixit and their image in the shownotes if you want to take a look.

I called up AppleCare yet again and this time asked the first tech if I could have a senior advisor as I’d be needing to mail some images to them (the first tier folks can’t communicate as freely as the senior folks). Pretty quickly I was able to convince the senior tech of my need for a replacement. He felt that my explanation was perfectly reasonable. And this was before he saw my images. When he did see them, he started telling me about how his mom got a really good camera and macro lens when she retired and loved to take pictures like this. But better than enjoying my photos, he documented that I could get a replacement. He told me to simply give the Apple Store my case number and I would be golden.

The good news is that when I got to the store, I found Ben, gave him the case number and Carlos fixed me right up with new AirPods. The funny thing is that they’re not able to replace the whole set. Instead they had to do an exchange of the left, then the right, and then the case. Luckily Carlos was really good at typing in landscape on an iPad as he repeated every procedure three times.

The bad news is that the replacement batteries in all three devices were nearly dead. The good news is that I had just enough time to use my Ennergie pocket cell battery to recharge them enough to confirm that I could pair them with my iPhone.

The main point of my story is that I think Apple (in the form of Angela Ahrendts) has instituted a new way of saving money. They still want you to feel good about your experience, but rather than giving away products, they’ll “meet you half way”. I’m curious whether any of you have heard this from Apple yet, or whether it’s just an amazing coincidence that I’ve heard it twice in the last few months. If you do hear it, know that it just means the negotiations are open.

8 thoughts on “Apple’s New Strategy: We’ll Meet You Half Way”