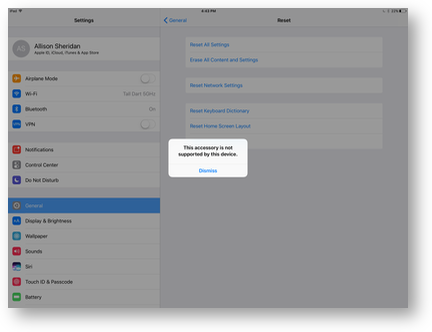 I know I’ve done a rant about the following subject before but I have to do it again. And of course I will start by telling a story and then end with the moral of this story.

A few months ago, when I awoke my 12.9″ iPad Pro, it had a message saying, “This accessory is not supported by this device”. That seemed odd, and for some reason I assumed it was irritated by my Apple Pencil. I dismissed the message with no ill effects and I moved on.

Over time, this same unsupported accessory message has been coming up more and more frequently. Eventually I noticed that my iPad Pro wasn’t actually typing on the screen. I’d tear the iPad off of the keyboard and let the magnet grab it again and that would fix it. Curious, but not a big problem.This week the message was getting more insistent and at times I could’t even fix the keyboard by tearing it off and putting it on again. It was time to search for a solution.

Off to the Googles and I found a thread in the Apple Support Communities with some people experiencing the same problem. I started reading people’s comments but didn’t find any solution, or at least none that worked. What I did find were increasingly angry people writing things along the lines of, “Why doesn’t Apple fix this???” (Note excessive number of question marks.)

I called AppleCare and Crisell wasn’t a bit helpful. She suggested I reboot the iPad, asked me if this problem happened just since a software update, and then finally told me to go into Settings, General, Reset All Settings. I told her that would reset my network settings and I’d rather not do that. She said it wouldn’t. So I asked her what it would reset. She did not have an answer for that. She searched for a bit (and so did I) and neither of us could find any description in the Apple Support articles explaining that setting change. There were plenty of articles explaining how to completely erase your iOS device but not that command in particular.

Crisell said she was going to have to contact a Senior Advisor. I suggested that she just connect me to the Senior Advisor and she happily agreed. That’s when I got through to my new little friend Tamekie. She and I got along just swell. I explained first off that I knew what I was doing so we could skip all the dumb steps and go quickly.

She asked me to describe the problem again and then asked me for the serial number of the iPad Pro keyboard. She explained that it was printed on the inside of the keyboard itself. Technically she was right but it’s comically difficult to read. I’m not just talking about old person can’t read a small number hard to read, I’m talking impossible. It’s imprinted into the dark grey felt. I even took a photo of it just for the comedy and put it in the blog post for your entertainment.

Luckily Steve and I always keep the boxes for our electronics and we had just cleaned them up so all of the Apple stuff is all sorted together so I was able to get it off of the box. Not by looking at it of course, but by using the Magnifier function on the iPhone. (See old person comment earlier.)

I read Tamekie the serial number, she asked me to hold for a bit.  When she came back she told me that there is absolutely a problem with the iPad Pro keyboards, and that my serial number is in the batch that has the problem. She promptly got me a genius bar appointment at my local Apple Store and I’ll be getting a new iPad Pro keyboard on Monday.

But let’s go back to the Apple support forum. I went to look at the thread again about this problem. 744 people had clicked the button that said, “I have this question too.” Five pages of people writing angry comments and feeling frustrated.

You know the moral of the story, right? Call AppleCare. We pay a lot of money for these devices and the support we get is often fantastic, but only if we use it. I know it’s a lot easier for me to waste a half hour calling them now that I’m retired, but seriously, call them. They can help.

One more thing – if your device is out of AppleCare, that doesn’t mean you can’t call them. The replacement program for this example, the iPad Pro Smart Keyboard is being fixed under a Quality Program, which means it doesn’t have to be in warranty. I’ve had a graphics card fixed in a 2011 MacBook Pro five years after it was first bought. So call Apple!