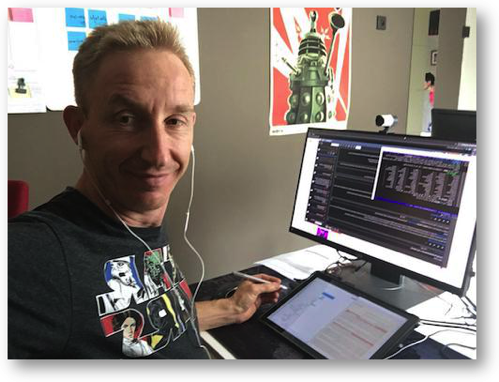 Our old friend Knightwise is back with an interesting problem to be solved.

He reads his books electronically in the Kindle app in ePub format, and he likes to highlight as he reads. He uses these highlights in creation of talks he gives to other entrepreneurs. He outlines his talks using a Mind Mapping program called X-Mind from xmind.net.

He was hoping to get an iPad Pro and use split screen to view the book on one side and the mind map on the other side. The problem he found though was that he couldn’t use the Kindle app in split screen and wonders whether iOS 11 would fix the problem.

In the mean time, he’s using his Surface Pro 4, running Windows 10 with the Microsoft stylus. In that way he can have his two windows up side by side and highlight his book with the stylus in one window while making a mind map in the second window.  Let’s listen to him explain this in his own words:

Here’s the deal. Apple provides APIs (application programmable interfaces) to allow developers to do interesting things with their apps. It’s up to the developers to use these APIs. Let me explain by example.

The 12.9″ iPad Pro is enormous, so a full-sized, on-screen keyboard can fit quite nicely in a small area across the bottom of the screen in landscape mode. It takes up at most 20% of the display leaving the rest of the screen for your application. More than a year after the 12.9″ iPad Pro came out, Facebook to this day has not yet implemented the API to recognize this bigger device and give us the proper keyboard. It’s so stupid – the keyboard literally fills 40% of the screen. Drives me batty. 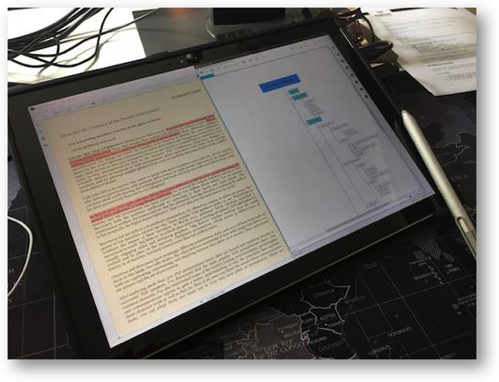 Back to Knightwise’s problem. I did some testing. I opened the Kindle app on my iPad Pro and confirmed that they haven’t implemented split screen, even though split screen came out in iOS 9 back in 2015! There could be a reason they didn’t ever deploy split screen on the Kindle app. One of the joys of reading on the dedicated Kindle devices is that you can’t be distracted. Maybe they tried to emulate that in the iPad experience by not letting you have anything in split screen while reading?

Knightwise asked whether perhaps iOS 11 might fix the problem. I have my 9.7″ iPad Pro running iOS 11, so I fooled around a bit to see if I could find a solution. It’s clumsy but there is a possible path to success.

Split screen is precisely that, your screen is split into two different applications. They can be 50/50 or 25/75. But there’s also Slide Over which in iOS 11 allows a second application to hover over the main application. This means one app takes up 100% of the screen, but the other hovers over it at 25% either on the right or the left. If implemented properly, you can actually have two apps in split screen AND hove a third app hovering in Slide Over.

Now that’s only useful if Xmind will do the hover dance in Slide Over, because the Kindle app does not. But sadly, Xmind doesn’t support split screen or Slide Over either. However. I did some more digging and discovered that Xmind (at xmind.net) is actually a web service for syncing mind maps. And my favorite mind mapping application, iThoughts, will import and export mind maps from Xmind.

A normal person would think that this is a dumb idea, but I’ve heard Knightwise talk about stringing 8 pieces of software and 6 servers together with IFTTT to make something work, so maybe he’ll like this. He can keep his mind maps in his xmind.net account, and import/export them from iThoughts to his iPad and other devices. When he’s on the iPad, he can put the Kindle app as the main app, and use Slide Over to hover his mind map over the Kindle app. He sent a photo of his setup and he does do tall skinny mind maps, so having it in only 25% of the screen might be ok. If he puts the Kindle app into that mode where it shows two narrow pages instead of one wide one, he’d be able to read a whole column while working on his mind map!

Of course it’s cool that he has a working solution with the Surface Pro 4. Some people here might be wondering why that isn’t the final solution. I’m going to guess at the answer. The Surface Pro weighs 1.7 lbs while the 10.5″ iPad Pro weighs just a smidge over 1lb. That doesn’t sound like much of a difference, but that’s nearly 70% heavier. I checked the physical dimensions and it’s 87% bigger in volume too. But if it does what he needs, maybe the weight and volume are not as big of a factor.

But maybe he’s just looking for an excuse to buy a new iPad Pro. We can all respect that, right?