A while back on the show, I was talking to someone about Nightshift and how much I dislike it. It might have been Bart but I’ve had this argument with so many people I lose track. Anyway, Chris Eschweiler wrote in letting me know that I’m not alone. He gave me permission to read his commentary on the subject out loud:

Personally, I find removing the letter “F” from “Nightshift” is more accurate. I can’t stand the muddy, baby’s-first-diaper quality that the feature brings to the iPhone. I so want to grab Jony Ive by the collar and remind him that not everyone is looking for stylish, trendy, kitschy interfaces…some of us just want something that works well for *us*.

The closest thing the iPhone has to adding functionality in low light situations is the ability to invert the screen. The only problem is, it inverts the colors of everything…including icons and images.

Why would ANYONE want to invert images, Apple? Unless you’re in some underground command center trying to tease detail from a poor photo of a tire track from a suspect’s car, inverting images is…well, it’s dumb. Why doesn’t Apple modify this feature to be more useful? Light text on black background is a so much easier to read in low light. If we are truly going to embrace the “go paperless” mantra that computers were supposed to usher in, then why do we start with the paper analog and assume the background of everything we do must be white?

Thanks for letting me rant.

Well thanks for that Chris, I’m glad to know I’m not alone! I have found one use for Nightshift. When I do video shows, like the live show or Daily Tech News Show, the light off of my 27″ Cinema Display gives my skin tone a sickly blue tinge. I can fiddle around with the awesome menubar app Webcam settings and change the hue, lightness and saturation, but it turns out an easy way to compensate quickly is to turn on Night Shift. The muddy, baby’s-first-diaper quality display makes me look like I spent a lovely day at the beach instead of giving me the typical skin tone of a geek. 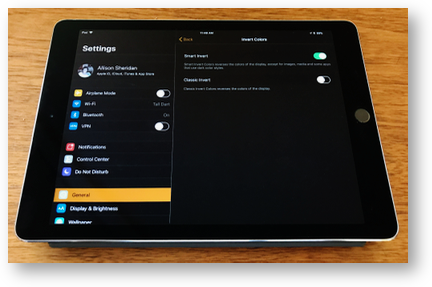 On your inverted screen comments, I have some information that might make you happy. Steve and I spent a couple of days with the awesome Shelly Brisbin, who has low vision. For her particular vision (everyone is different), bright lights are the worst thing. Because of this she invokes the inverted screen option. As she uses this feature and is a web developer who works with a lot of images, I thought she’d be a great person to ask about whether the image being inverted is an advantage.

First of all, she agrees with you that she would prefer the image not be inverted. But then she pointed out that in the publicly-available beta of iOS 11, there are two modes for inverting colors on the screen. There’s Classic Invert, which inverts everything, but there’s also Smart Invert which does NOT invert the images! Just flipping that switch from within Settings, General, Accessibility was so very pleasing. It looks fantastic!

I looked at the Apple apps and they all looked great with black backgrounds but normal images and buttons, but the non-Apple apps I checked didn’t follow the setting. I’m guessing that this is yet another API the developers have to take into account when writing their apps.

Here’s something interesting – I tried to take a screenshot of the iPad with Smart Invert turned on, and Apple Photos inverted the image, so instead of showing the black background, it was white again! I thought, no problem, I’ll just turn off smart invert and the screenshot will show black…but it kept it white! Very interesting choice by Apple. I had to use my phone to take a picture of the iPad…like an animal.