One of the best things about being retired is having the time to talk to companies on the phone. When I was working, I would simply let things go that were irritating me because there just wasn’t the time.

This week my mission became talking to every bank I deal with about their security model. For reasons that are irrelevant to the discussion, (and highly annoying to me) I’m associated with four different financial institutions, and each of them got some messaging from me this week.

Their current service varied from two of them having no two-factor authentication, and two having SMS, email and phone call verification. None of them use a software authenticator method like Google Authenticator or the one built into 1Password.

Before I spoke to them, I decided it would sound a bit weak to say, “My friend Bart is real smart on this stuff and HE says…” So I started to do my research. I wanted to make sure I had a crisp explanation of why using SMS is a bad idea for two-factor authentication.

At first I found articles on lots of sites talking about the problems with SMS. I also remembered that the problem is so publicly known that 60 Minutes actually had an article where they had a hacker break into a Senator’s phone while they were taping the show. But that didn’t seem like the right kind of evidence to hold their feet to the fire.

I found an article at the Register from around a year ago about the problems with SMS and followed links in there to the best source possible.

That source is NIST, the National Institute of Standards and Technology. NIST doesn’t create any governing laws but is responsible for setting the standards for all technical industries. Still the right resource and important to know how they impact the institutions with whom we deal.

From the Register I was able to find NIST Special Publication 800-63B at pages.nist.gov/800-63-3/sp800-63b.html. 800-63b is the Digital Identity Guidelines for Authentication and Lifecycle Management. Rolls right off the tongue, doesn’t it?

While I’m sure it would be riveting for me to read the entire 69-page document to you, let’s dig into just the pieces that are relevant to our two-factor authentication questions. We need to start by defining a couple of terms.

I’ve been calling this topic two-factor authentication, but in the guidelines they’re more generic and refer to this as Out-of-Band Authenticators.

The initial NIST guideline went up for public review last year, and it included statements indicating that SMS as an Out-of-Band Authenticator was deprecated but in the finalized document, it has been modified and is now called SMS restricted. We’ll get into what restricted means a bit later, but listen for that word.

And finally, the document uses the term CSP. I had to go to another NIST document to find out that it stands for Cyber Security Practitioner. That’s the poor joker who’s going to get blamed when the company doesn’t properly fund its security organization.

Ok, I think we’ve got enough terms defined. Let’s look at just some excerpts from each section that applies to two-factor authentication, aka Out-of-Band Authenticators.

The out-of-band device SHOULD be uniquely addressable and communication over the secondary channel SHALL be encrypted unless sent via the public switched telephone network (PSTN). For additional authenticator requirements specific to the PSTN, see Section 5.1.3.3.

So it shall be encrypted, unless it’s sent over the phone network. Looks like we’re going to have to read some more over in section 5.1.3.3. But before we leave Section 5.1.3.1, it goes on to say:

Methods that do not prove possession of a specific device, such as voice-over-IP (VOIP) or email, SHALL NOT be used for out-of-band authentication.

So we know that it’s inadvisable to use email or a phone call to a VOIP phone to get your authentication.

Use of the PSTN for out-of-band verification is RESTRICTED as described in this section and in Section 5.2.10.

There’s that word restricted we were looking for. Let’s learn about the restrictions:

If out-of-band verification is to be made using the PSTN, the verifier SHALL verify that the pre-registered telephone number being used is associated with a specific physical device.

Now we used to believe that you having your cell phone in your possession did mean a call to that number was associated with a physical device. But we’ve learned that it’s just not true. Section 5.1.3.3 elaborates:

Verifiers SHOULD consider risk indicators such as device swap, SIM change, number porting, or other abnormal behavior before using the PSTN to deliver an out-of-band authentication secret.

Note that it doesn’t say the authenticator can’t use the PSTN anyway, even after considering the risks of using it.

Let’s keep going though. We’ve still got 5.2.10 about restrictions on authentication using the PSTN to look at. I’d like to pull out a couple of interesting sentences in here.

At first read, that simply says, IT Security should be allowed to do their job. Assess the risk, and come up with mitigations. Then be prepared for the probability that the risk will become unacceptable, and if so, to stop using this method. Reasonable advice. But NIST puts some more teeth into the statement:

I like where they’re going here, sounds like fodder for a future lawsuit, doesn’t it? It gets even stronger:

1. Offer subscribers at least one alternate authenticator that is not RESTRICTED and can be used to authenticate at the required AAL. [Authenticator Assurance Levels]

2. Provide meaningful notice to subscribers regarding the security risks of the RESTRICTED authenticator and availability of alternative(s) that are not RESTRICTED.

3. Address any additional risk to subscribers in its risk assessment.

4. Develop a migration plan for the possibility that the RESTRICTED authenticator is no longer acceptable at some point in the future and include this migration plan in its digital identity acceptance statement.

But point 1 of the section I just read says that they shall offer you one authenticator that is not restricted.

Bottom line, after reading all of this, NIST Special Publication 800-63B says that they darn well better give you a software authenticator method like Google Authenticator!

Time to call the banks: 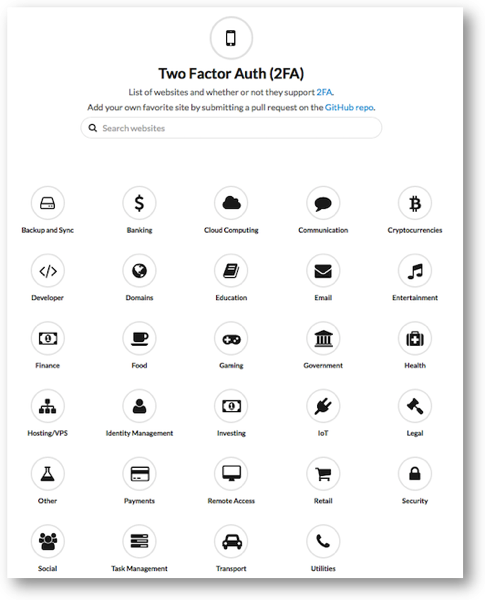 I did find a cool site while I was working on all of this It’s twofactorauth.org. It’s a list of websites and whether or not they support 2FA. You can search for a site, or peruse by category, like banking, backup and sync, government, IoT, and more. It’s cool because they have columns for what type of 2FA each organization supports, including SMS, phone, email, hardware token, and software token. They even have buttons to help you tweet or Facebook the companies if they don’t support two-factor authentication.

I looked at the banking section and sure enough, pretty much the only ones with hardware or software tokens were in Europe.

Like I said, one of the great joys of retirement is having time to do stuff like this. I hope maybe I’ve inspired you to torture your banks and any other institutions that hold something precious to you.