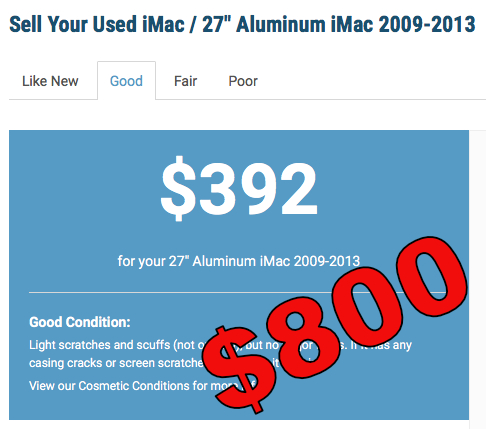 One of the ways to justify spending money on Apple gear is to sell your used Apple devices when you’re done with him. Apple products retain their value really well, which I’m sure you’ve noticed if you’ve ever tried to find a “cheap, used MacBook”.

I illustrated the value of selling your own Apple gear when I did a spreadsheet analyzing all the different ways you could buy an iPhone from a 2-year subsidized contract, to paying outright, to trading in your phone every year, to buying on one of these free loans they’re offering in the US right now. In my analysis, I explained that a phone that cost $600 new will sell for around $400 one year later and $200 when it’s two years old.

If you do the trade-in deal, you get the new hotness every year but you’re actually losing a couple hundred dollars every time you do it because Apple (or your carrier) gets the still highly available sales value of the used iPhone.

Make Someone Else Sell It For You

You could go to one of the resellers like Gazelle or Sell Your Mac, but they’re only buying it so they can resell it for more, so you won’t get anywhere near the value you’ll get if you sell it yourself. While you’ll make more if you sell it through eBay, setting up an account to sell and getting a good reputation there is time-consuming, and maybe not worth it if you only need to sell something every year or two. We’ll circle back to eBay in a little bit.

Figure Out What You’re Selling

Maybe I’ve convinced you to sell it yourself, or at least you’re still paying attention. The first thing to do is figure out exactly what device you have. A while ago, my son’s girlfriend had an iPhone she wanted me to sell for her. I said, “what iPhone do you have?” She smiled and said, “A PINK one!”

We might need to be a bit more specific than that. To figure out what device I’m trying to sell, I use two tools. I start with the device itself.

What Mac Model Do I Have? 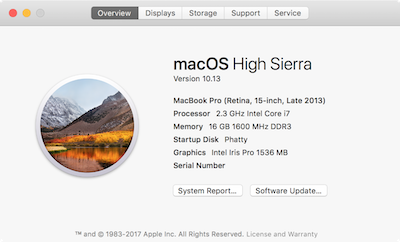 On a Mac, select the Apple Logo in the upper left and pull down to About This Mac. Right below the operating system you have installed it will tell you all about your system. For example, my 2013 MacBook Pro says, MacBook Pro (Retina, 15-inch, Late 2013). It also shows your processor speed. In my example it says 2.3GHz GHz i7, and 16GB of memory. Now we know the Model, size, processor, memory, and disk.

What iPhone/iPad Model Do I Have?

Let’s walk through how to do the same thing on an iOS device. I’m actually selling my mother-in-law’s old iPad, so I’ll use that as an example. On the device, open Settings, and scroll down to General and select About. In the long list of information about the device, you’ll find Model and it will be just a set of letters and numbers. In my case, it says MC985LL/A. We’re going to need some help deciphering what that means. 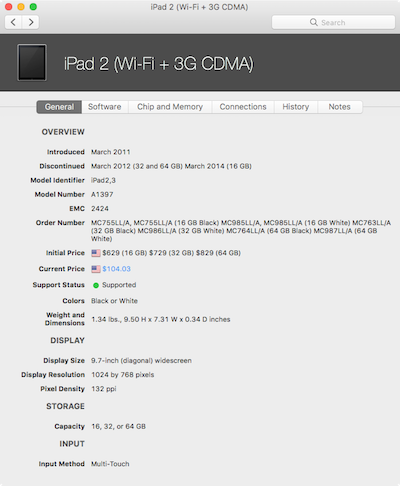 Now that we have some clues about our devices, we need to bring out a long time favorite tool in the Mac community: Mactracker from mactracker.ca. If you haven’t ever heard of it, it’s a donationware app for the Mac and iOS that will tell you everything you need to know about anything ever sold by Apple.

About This Mac gave us just about everything we need to know about the Mac, but the iOS devices are a little more cryptic. We’ll use Mactracker to crack to code on that MC985LL/A nonsense.

Pop open Mactracker and simply drop the model number into the search window. In my example, on the Chip and Memory tab, I can now see that this iPad is an iPad 2 with Wifi and 3G CDMA (aka Verizon). This cellular capability is worth noting because it may have higher resale value.

Remember I said that we have almost enough info to sell our device? The last bit we need is to know what the maximum operating system the device can take. In my example, one of the reasons my mother-in-law wanted to get rid of her iPad was because it can’t be upgraded to get the latest security updates. I can see from the Software tab of Mactracker that the maximum OS is iOS 9.3.5. That’s going to hurt sales, but it does tell me to market this as a device to maybe use as a camera and nothing else.

My next step is to go to eBay to figure out what the device is worth. You can type into the search field the device you’re selling, but don’t get too excited by what you find, we need to do some refinement first.

Scroll down on the left-hand side and look for “Show only” and check the box that says Sold listings. Now you won’t be seeing what someone dreams they’re going to get, you’re going to see what people have actually paid for this same item.

It’s time to open your spreadsheet of choice. I create a top row with one column each for the stats of the device I’m selling. For the iPad, I say iPad 2, then 3G CDMA, then 16GB, then White.

Now I start to scroll through the recently sold items to see if I can find any that match or pretty close to it. I start recording what they sold for, and any differences from what I’m selling.

You have to watch out for a couple of things here. Lots of times you’ll see a super low price, but if you look closely it will say “sold as is” or “for parts” or “doesn’t charge” or “cracked screen”. Don’t note those unless yours has the same maladies!

Beware of the other end of the spectrum too. Often you’ll find companies selling products actually still in sealed packages, or with a reputation that’s super high so they get a much higher price. Toss those out too.

When you’ve recorded somewhere around 10 sales (if you last that long), take an average of all of the reasonably close sales numbers. Now you have a price. At this point, you may want to add money on if you have some extras, like a nice case, or some software you’re including. Or you should discount the price if you’ve got any physical damage. Sadly the smallest scratches can sometimes put someone off. 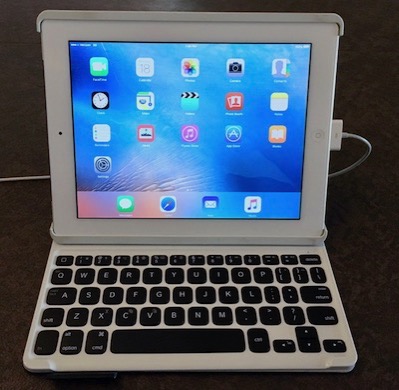 At this point about half of you have decided to sell to Gazelle, and that’s totally cool. But for those of you who are still with me, the next step is to take GOOD photos. I’m convinced that bad photos are the biggest cause of low sales prices (that and not keeping the box).

Find a well-lit area on a nice table or even the floor if the carpeting won’t distract and stage the device. The hardest part is to make sure there’s nothing in the background to distract like a cat, or a shoe or a box. Reflections off the screen can also be a bear. Personally, I ask Steve to take most of the photos because he seems to have the patience to get them “just so”.

I suppose it’s possible to take too many photos of a device, but I find myself more often frustrated that there aren’t enough different photos. With something like an iPhone, it’s important to show the back to show whether it’s got scratches on it. If you kept yours in a case, then definitely show off that shiny back. 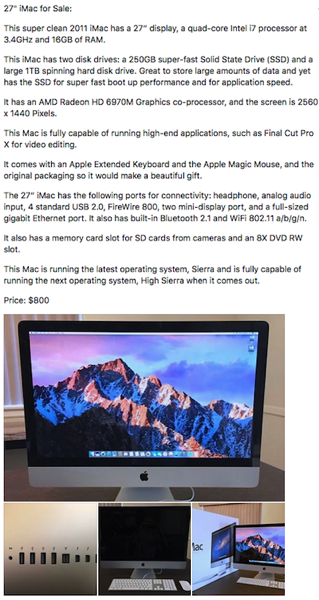 I’ve saved the main trick for last. I have found a lot of success selling things on Facebook of all places. The main reason I think this works is because my friends trust me. They know that if I say something works, it works. If I put a price on something, they know I’ve researched it. Heck, I sold a car through Facebook one time.

I post my photos on Facebook, being careful to put them in order from what’s most important to what’s least important. Obviously with the iPad, the screen being perfect matters the most, and the back being nice and shiny, then I’ve got a nice keyboard case with it, so those photos will be next. Finally, I’m throwing in a rugged case that will bring up the rear.

If you’re not on Facebook or if you haven’t got much reach there, think about where you do have a presence. I contribute quite a bit to some local user groups and their mailing lists, so I will often post devices there as well. You, of course, have to be respectful of the moderator’s rules. The clientele at local users groups in my experience tends to not be the crowd that has to have the latest and greatest cool new thing, but rather something that will work for a modest price to meet their needs.

We sold an iMac just recently to a gentleman that I had met at a user group and had chatted with in emails and he tried to buy it from us without ever even turning it on! We insisted he play with it a little bit and he acquiesced and we ended up spending a lovely time with him learning the new machine.

My main point is to sell where you have a reputation. Maybe it’s at your school, or maybe your church or synagogue or mosque has a yard sale every six months, maybe your office has a time and place people sell things, or maybe you’re a member of NextDoor and everyone knows you as that helpful person. Wherever you have a reputation already may be easier and more profitable than trying to sell to strangers.

After you’ve written up all of the specs and posted the photos, try to tell a story about who this is for. Great for kids! Excellent starter Mac. Supplement your laptop with a powerful desktop. Give the people reading a reason to picture themselves using this device.

I do one thing more that you might consider. When I sell a device, I give the person a 30-day warranty. I know I don’t have to but I would hate to have someone feeling ill towards me because right after they brought the device home something failed on it. I protect myself though. I write a little point of sale document as follows:

If the device fails within 30 days and has no signs of physical damage, Allison will refund the purchase price in full at the return of the device.

I’m no lawyer but this level of detail makes me more comfortable. So far no one has come back asking for their money back but if they ever did, and I didn’t see a big footprint on the screen, I’d probably give them the benefit of the doubt.

After hearing all that I do, you might have joined the folks who decided a while back to go through Gazelle, or even to do the trade-in program because their time is worth more than the money they would make.

Now, does anyone need an iPad 2 with 16GB that comes with a Logitech keyboard case? It’s great for watching Netflix and PLEX!

1 thought on “How I Sell My Used Apple Gear”