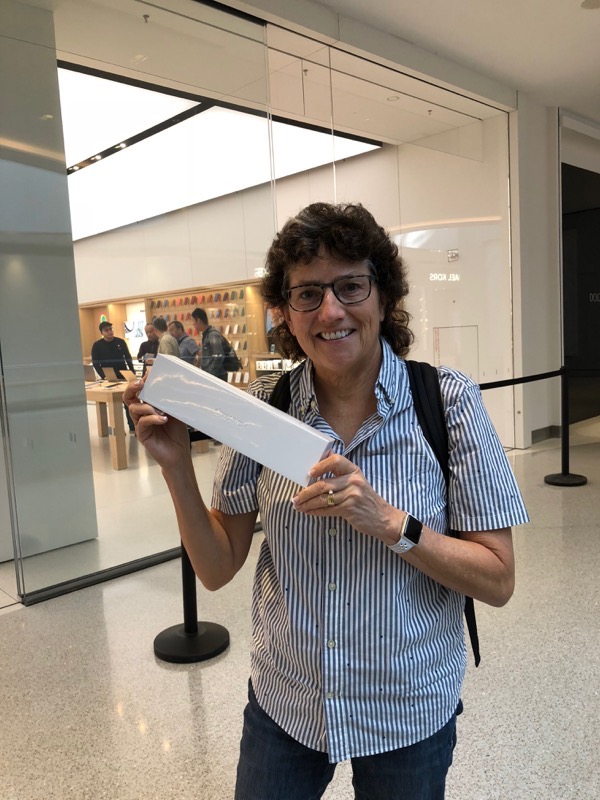 Every year when the new shiny comes out, I find a worse way to buy my Apple products. Who can forget when the iPhone 4 came out and I stood in line how long to get it? I think it was 7 or 9 hours, can’t remember exactly. Then the next time I thought I’d be smarter and wait at home, and while everyone else got their toys first thing in the morning (including my friend Ron who lives exactly 1.5 miles away), mine didn’t come till 9 at night.

Then there was the year I waited at home all day for the new iPad for me and my friend Diane, only to get a notification about 4 pm saying that it simply wasn’t going to be delivered that day at all. I think that was my favorite, because I called around and found them in stock, drove out and bought them locally, only to find a FedEx truck peeling away from my driveway having left $1300 worth of iPad unsigned for on my doorstep as I returned home.

Last year wasn’t as dramatic, but it was still tragic. I was able to order my phone at midnight, but Steve’s order got messed up and his was going to be delayed by a few weeks on delivery. Because I’m the best wife ever, I got up at 3 am and met my friend Pat at the Beverly Hills Apple Store to stand in line for him, and successfully got him a new phone on day one.

This year I managed to find the worst of both worlds, delivery and standing in line. Steve and I hung out with other NosillaCastaways in the live chat room (podfeet.com/chat) at midnight Pacific Time last Thursday night/Friday morning while we awaited the store to open. It’s was fun in a “misery loves company” kind of way. Steve and I were both successful at each ordering an iPhone XS and an Apple Watch Series 4 in the first few minutes of store opening with delivery dates of Friday the 21st. For once it was going to be easy!

We were excited waiting for Friday when our new toys would arrive. And then on Wednesday, I was talking to our daughter Lindsay, and she said, “You did remember to order my Apple Watch, right?” You see, back in early July, Lindsay asked if for her birthday in early August she could get a new Apple Watch to replace her Series 0. I advised her to wait for the Series 4 to come out and she thought that was a great idea. So she’s already waited a month and a half for her birthday present and I totally forgot. I felt horrible.

Lindsay is the sweetest person I’ve ever met in real life and she started to comfort me as I began to wail about what a bad mom I am! I suggested I should probably just let her have mine and I wait the extra month it would now be for delivery. She said, “noooo, I couldn’t let you do that…” But I’m not sure she meant it.

Then she mentioned that she never told me which watch she wanted. I showed her the options and mentioned that there’s a new gold watch and she immediately said she wanted that color. She said she’d rather get the color she wanted a month later than get the wrong color day one. Yay! I had ordered the silver aluminum so I didn’t have to give her mine and she’d have to wait a month for hers! See? I’m still a bad mom.

But then my friend Ed Tobias said he was going to go stand in line to try to get an Apple Watch. You’ll remember Ed as the guy who built a web server on a Raspberry Pi and then wrote his own website in Bootstrap. Ed asked me for advice on how early to get in line. Well, I stood in line last year to get Steve’s iPhone with Pat, we went to Beverly Hills at 3 am, but that was way overkill. We were alone till around 6, and most people didn’t start strolling into line until around 8 am, with the store opening at 10.

With Ed going anyway, I figured I might as well try to stand in line and get an Apple Watch for Lindsay on day one. We went to Beverly Hills at 8 am, and get this … we walked right in and were able to buy the watches! It was amazing. Oddly they didn’t have many iPhone XSs but they had a fair number of Apple Watch.

The good news is that I got Lindsay her watch and I wasn’t the worst mom every, but the comedy is that I then had to go home and wait all day, till around 4 pm for my toys to come. So I managed to wait in line AND wait at home, the worst of both worlds!

It’s too early to really give you any kind of detailed thoughts on the new devices, but first impressions are certainly in order. As always it’s important to understand the perspective. Let’s start with iPhone. Before the iPhone XS and XS Max were announced, we told Lindsay and her husband Nolan that we would give them our iPhone Xs when the new models came out. Lindsay has a 7 Plus so it’s a reasonably good upgrade for her, but Nolan has an iPhone 6 Plus which is really in poor shape. I suspect a new battery is in order, but he never did the battery replacement. In any case, it is 4 years old and really showing its age.

However, when the new models were announced, my heart didn’t exactly go pitter pat with excitement. I know, faster CPU (Bionic for crying out loud) and faster GPU and blah blah blah. Ok, some camera enhancements, but nothing magical like the invention of Portrait mode and dual lenses. Even the ability to change the depth of field made me yawn because you can already do that with the iOS app Focos for any iPhone that supports Portrait Mode.

But we did promise the kids so givers that we are we went ahead with the purchases of two iPhone XSs. The new models come in 64GB, 256GB, and 512GB. Now you might think that with a 70,487 image Photos library, I would be able to justify the 512GB phone. But before order day, I checked my iPhone X storage, and I wasn’t even using 64GB! I was close, I think it was 62GB, but it really shows you how magical iCloud Photo Library is. Apple simply manages the size of my images so they all fit nicely. No way was I springing for a 512GB iPhone.

Migration to the new phone was interesting. In the old days, I always did an iTunes backup. Then the iCloud backup got so good that the iTunes method just didn’t seem necessary and actually took longer than iCloud. The tricky part is to make sure the Workout data is preserved (if you’re a fan of exercise like we are.) We’ve got data going back to 2015 and really didn’t want to lose all those fun metrics.

After our iCloud backups were restored to our new phones, we discovered that everything didn’t come over properly for Workouts – it was weird. We looked at the calendar view in Workouts and we could see the progress rings for stand, exercise, and calorie burn going all the way back to when we first got the watches, but when Steve went into any given day, none had his actual workouts. So he couldn’t see his runs, his lifting, his walks at all. Everything was gone. Both of us were missing some of the achievement badges you can earn such as the one for walking or wheeling a certain distance on Earth Day. Oddly we weren’t missing all of them, just some.

I found an article on MacRumors that might explain the missing badges. Evidently, there’s a bug in iOS 12 that’s causing this problem.

My phone was in pretty good shape, but all those 70,487 photos were having to be recompressed and brought down to the phone. So we both decided to go back to the iTunes backup method. One big caution and I’ve mentioned this year over year: your workout data is considered health data. Apple considers this your private information, so in order to retain this data when you back it up to iTunes, you MUST check the box for Encrypted Backups.

The good news is that this worked, we got all of our workouts and my photos were all there in a much shorter time than it was going to take via the cloud. We got a few more badges back too, and the rest will probably come along with an iOS update.

I took some photos to compare the iPhone X to XS and I’ve got some opinions but I’m going to save that till next week when I can take the time to explain what I’ve learned.

The one problem with restoring a backup is that your new phone might not seem that much different. The iPhone X was a huge jump and felt really truly new when we got it, but so far the iPhone XS feels like the same phone I had before. Maybe I’ll start to notice new features over time, we’ll see.

The Apple Watch Series 4 feels much different than my Series 2. The main thing is the screen. I’ve already talked about the maths of how the screen has changed, and in real life it feels positively spacious. As the math would suggest, the overall size of the watch doesn’t feel different at all.

Probably the biggest place I notice the much larger screen is in typing in the passcode when I first put on the watch. It would often take me an extra try to type it in with those tiny blocks on the 38mm watch, but on the 40mm Series 4, they look HUGE.

I think it’s faster than my Series 2 watch but not blow my hair back faster. I’ll have to play with more apps on it over time to be sure. So far the big things I’m noticing are actually from watchOS 5. I love that Workouts warns you that you forgot to stop (or start) a workout for example.

I know this is weak sauce in terms of my normal depth of review but I promise to give you more info about it over time. Heck, I bet you can find other people droning on and on about the new toys, right?