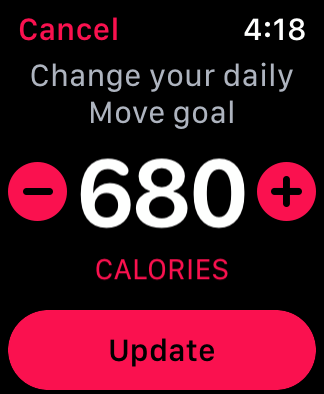 Last week on the podcast, I played Rush Sherman’s Dumb Question asking us what makes a good Apple Watch Activity goal. We got some terrific answers that I think add a lot to this conversation.

Rick Abraham answered on the blog post with this advice:

Once per week, my S4 Watch prompts me with a new, usually higher, daily activity goal based on my past weeks performance (currently 560 for me). I typically leave my goal the same as I don’t have the time required that it would take to achieve an increased activity goal. If I did have the time, I would probably go with the recommendation made on the Watch each week until the goal again became doable for me time wise. It might also be good idea to consult a doctor and get an experts opinion on the proper activity goal based on your particular situation.

Another factor for me is I still use the LoseIt app to track calories consumed. If I have a few bad eating days where I consume way more than my daily calorie average, I will increase my activity to offset those consumed calories. (Knowledge is power) So I guess I’m saying for me its a moving target rather than a static number etched in stone week to week.

Thanks, Rick. That’s pretty much how I approached it but the number kept going up and I DO have the time. It was killing me so I stopped responding to its requests to up my number and it eventually quit nagging me! I think the best part of your advice is to consult a doctor, I had actually never even thought about that. When you mentioned using LoseIt to track calories and balance that with exercise, it reminded me of the tiime Steven Goetz said that the Apple Watch let him have a cookie. What he meant was that he did an extra walk around the block and the watch told him he had now earned the right amount of extra calorie burn to be able to fit a cookie into his diet. I like the way he said it, though!

My two cents is that good Activity goals are personal to the individual. I think that you have to use your stated activity goal with other data like weight, medical conditions and lifestyle. If you are doubling your active goal but still gaining weight, then it’s time to step it up. However, if you hit your goal 3 of 7 days but getting healthier then it’s ok. If you let the Apple Watch take over it will continue to increase your goal if it sees that you are hitting your numbers consistently. The most important thing is to have a balanced life with your goal. It’s not about the actual number.

Norbert, you make some great points here, especially about it really being an individual goal. Think of it like a personal record. You don’t set your PR goal based on anyone else, it’s just that, it’s personal.

Dave Brennett gave his practical advice in our Facebook group:

Good activity goals are only seen in hindsight – if they can’t be stuck to, then they are not good, – and small incremental changes are better than reaching for the moon.

Ooh, I like it. Combined with what Norbert said, maybe the way to do it is to get a baseline that is your personal normal. Wear the watch for a couple of weeks and watch how much you’re doing without even trying. Then think about the goals that would be practical for you. Can you do 10% more next week? Sure you can. Try that for a few weeks and when it becomes easy, then think about the next 10%.

Rick Cartwright wrote in our Slack:

I don’t have a good answer, but I’ll ramble for a couple minutes: I think this is very individual. Each person is likely motivated by something different. A friend of mine has to set his ‘move’ goal high, and is motivated when the app increased it every week. That gets him motivated. If he falls short, it motivates him for the next week. I am more motivated by the ‘streak’ (no, I am not streaking) .. how long can I close my rings.

I’m at 883 days .. that keeps me very motivated. I don’t up my ‘move’ goal. My move average is over 1000 cal, but I really don’t get motivated by that number. It’s the streak that motivates me (my OCD I guess). A long way of saying, know what makes you work hard, and set your goal accordingly. I hope that makes sense, and is helpful.

You are right on, Rick. I have noticed when I have a good streak going, I do NOT allow a lazy day. I haven’t had a streak in about 6 months, so while most days I rock my goals, an odd day off here and there isn’t the end of the world. 883 days straight is nuts, I don’t care what your goal is.

I know people that the idea of the watch nagging them is the last thing that would motivate them, and yet that little nag is gold to me. Another motivational idea can be the little badges that Pat Dengler loves so much. Even though they’re virtual, she’ll do everything to get them. Other people might think that’s silly and not even consider them motivational.

Now that Apple Watch supports competitions between people, that can be yet another way to get motivated.

I love this topic (can you tell) and hope everyone learned an idea that might help them find the right Activity goal for them and will get healthier. I’d like to talk more, but I have to get 61 workouts done in the Month of October to get a little badge.