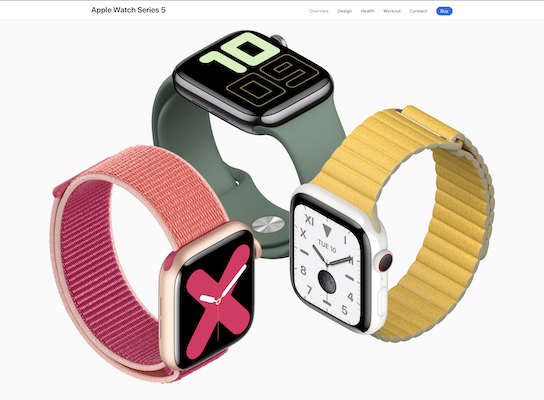 Lately, Steve and I have started upgrading our phones and watches every single year. I’m starting to seriously question this strategy. While we can afford to do this, and it’s great fun, in two cases I don’t think we’ve gotten our money’s worth.

Last year we promised the kids that we’d flow down our iPhones X to them when we bought the iPhones XS. Then we sell their old phones and everyone is happy. While the X was a huge upgrade for them (Lindsay was on a 7 and Nolan on a 6S), the upgrade from the X to the XS for us was really minor. If I took the same photo with both phones and squinted real hard, I could say that the XS was slightly better. Had I not promised the phones to the kids, I don’t think I would have bought the XS.

And yet when we bought the iPhones 11 Pro, the upgrade was huge from the iPhone XS. The camera is amazing and the battery life is insane, the two things I probably care most about.

When the Apple Watch Series 5 was announced, I listened carefully for the enhancements from the Series 4 we already owned. The big thing they hyped was the always-on feature. I thought that sounded pretty nifty because it is slightly annoying to have to snap your wrist to wake it up. I’m not alone in that more than once I’ve used my nose to wake up my watch.

In the back of my brain, I think I figured there were probably a lot of other cool features to the Series 5 that I would be getting for the price of the bottom of the line watch (~$500 for the small one with AppleCare). I was totally right to assume that, guess what else it has? A compass! Yep, no longer will I have to use my phone as a compass, like an animal.

When I got the new watch, I was super excited because, you know, the new shiny. But the first day I wore it, other than the awesome new band I got with it, I couldn’t tell the difference from my old watch. The band is the “Alaskan blue” sports band and I love it. I knew there were new watch faces, but guess what? Those same watch faces are available on the Apple Watch Series 4.

Wait, there’s the new Noise app that will alert you if you’re being exposed to excessive noise. It’s very cool, tells you that prolonged exposure (>30 minutes) could cause permanent hearing loss. Dave Hamilton said on the Mac Geek Gab that his wife’s watch notified her of just that when they were at a concert. Dave is crazy about protecting his hearing, so he immediately put in the earplugs he usually wears but forgot to put in.

But guess what? The Noise feature is also available on the Series 4.

So near as I can figure, the only mildly useful thing I got for my $500 was a watch that tells time all the time. But hey, that’s cool, right?

Until it got to be 9 at night the first day and my watch was already in low power mode. That is decidedly not cool. Apple promised that the Apple Watch Series 5 would have the same 18-hour battery life as the Series 4. I know some of you are hollering at your devices that I’m asking too much because you know how much I work out. With around 2 hours a day with the enhanced heart rate sensor running because I’m doing a workout, that is a challenge to the battery life. But my Series 4 would have between 20 and 30 percent left at the end of the day.

I was disappointed, but I know when you get a new phone from Apple, things like first-time spotlight indexing combined with how much we play with our devices really can compromise the battery during the first few days. So I hid my disappointment and kept wearing the watch. The second day it shut completely down at around 9:30 pm. Well, that’s just great.

I hate to say the phrase, “Lots of people are having the same problem” because with the vastness of the sales of Apple’s devices, you can pretty much always say that about any problem you’re having. But when 9to5mac did a poll on Series 5 battery life and nearly 70% the people said it was worse than they expected, I figured this problem was far bigger than just me.

After four days I figured I’d call AppleCare. I had no expectation going into this that I would get any kind of satisfaction but I wanted to challenge them to convince me not to march back into the store to return this watch. I have never simply returned an Apple product.

Let’s talk about what I like to refer to as “The Phone Call of Sadness™”. I’ll skip a lot of the detail but I’ll give you some salient points. My main contact at Apple support has been senior advisor Carrie. Carrie is not my little friend.

Carrie suggested I turn off the always-on feature. Ok, so then I’ve paid $500 for a watch that has a compass in it. No, Carrie, I won’t even run that test for you. If it helps, what have we learned? Do you expect me to keep it off?

She said she was going to send me a support article about how to manage my battery on the watch. I asked her what kind of advice was in that article. She said it suggests things like not running the heart rate monitor while you’re doing a workout. Wait, what???

But that’s not why she isn’t “my little friend Carrie”. She told me she’d call me back at a specific time and then did not call. This became a pattern of behavior.

Eventually, she did call and asked me to do something interesting. Engineering wanted me to install a profile on my phone that would pull diagnostics from the watch. It would run for 24 hours and then she would call me back to get the results. But of course, she didn’t call me back on time.

Here’s another annoyance. Every call she would try to do a screen share to me. Every time she did it, I would start to move my cursor to the button to accept, and before I could get there it would say Apple Support had disconnected. She would try this exactly three times, and then she would send me to a web page where I had to enter a code, it would download a little app which I had to run and then she could connect. This happened every single time we worked together. 100% repeatable failure of the tool from Apple.

The next time she didn’t call me back on time and I hollered at her for that, she said that we had to run the test again because Engineering said no data was collected for some reason. We installed the profile again and again I had to wait for an appointment time where she would be late. By the way, each time we connected was around 3-4 days apart because of her schedule.

The next time we were supposed to connect, she never called at all. I sent an email to her asking her why she was again disrespecting the customer by not calling. I got a call back from Apple, but it was from a different Senior Advisor. Turns out this woman was only calling because she saw my mail come through to Carrie, who wasn’t even coming into the office that day as she was out sick. Isn’t that awesome that I never would have known that if I hadn’t written to her myself? Great processes, Apple.

I tried really hard not to take it out on the woman who DID call me, but guess what the report back was from Engineering? The data didn’t come through so we need to put a profile on your phone to take data from your watch for 24 hours and send it to Engineering. I pointed out to the woman that there’s a famous saying, “The definition of insanity is doing the same thing over and over again and expecting a different result.” I told her I was done.

I did get another letter back from Carrie, who wants me to get together with her again and I haven’t answered her yet. I really went through this 4 or 5 hours of working with Apple to take one for the team. I never really expected them to fix anything for me, but I did hope that by me putting in the time, perhaps I could contribute data that would help Apple fix the root cause of these battery problems with the Series 5 Apple Watch. But there comes a time where even I haven’t got the patience or time to continue to play along.

I also haven’t told her that over the two and a half weeks we fooled around with this, my battery life has finally improved. I’ve had a couple of nights were my battery had 20+% left at the end of the night, followed by one where it went into low power mode at 10 pm. So maybe the watchOS updates plus the 127 iOS 13 updates have actually made a difference.

I put on the new California watch face, colored it to match my Alaskan Blue band, and added my complications in and NOW it feels like a new watch. If you’ve got a Series 4, and you’ve been eyeing the Series 5, get yourself a new watchband and a new watch face and save yourself $500. You can still use your nose to tell the time.