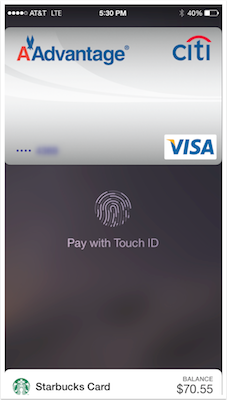 Like so many others I had to go out right away and try ApplePay on the iPhone 6 on day one. I knew I’d have to put in my credit cards first, so I opened up the languishing Passbook app and tried to scan in my credit card. The little box kept bouncing in and out but never recognized the card. That’s when I realized that I probably had to upgrade to iOS 8.1, right? Duh.

After the upgrade to 8.1, I immediately saw the change in Passbook, you get a new option on top to add a credit card rather than another kind of card. Unfortunately they sucked all the fun out of adding the card by offering to let me use the card already on file with Apple. Of course that’s the one I wanted. I decided to try my backup credit card. I have to have a backup because Citibank is ALWAYS claiming I’ve had unusual spending and blocking my card, like if I buy something from Apple they stop my card. Seriously.

Anyway I tried my second Citibank Mastercard, and it didn’t work, got a popup suggesting I call the bank. Oh well.

So now it’s time to go on the hunt for somewhere to spend my money via ApplePay. As luck would have it, my son Kyle and I were driving around on Tuesday and so I convinced him to stop by Walgreens because they take ApplePay. Unfortunately he thought I meant CVS (who don’t take ApplePay), so he missed the turn to Walgreens and he was hungry so he wouldn’t go back. I should have made him go to MacDonalds because they take ApplePay, but he wanted El Pollo Loco who don’t. I missed day one. He told me to quit my whining, I’d be going to Starbucks the next morning anyway and I could use it there.

But the next morning when we went to Starbucks, they said they weren’t ready to take ApplePay yet. Foiled again. Ok, fine. I went to the Apple Store to buy a Mac Mini – figured THEY’D let me use ApplePay, right? Well maybe they would have but they didn’t have the model Mac Mini I wanted so I had to leave without buying anything.

Then I thought I’d stop by Petco right near the Apple Store because they take ApplePay. Except then I realized the one nearby was a Petsmart. Foiled again.

Then I remembered that Steve needed printer cartridges and I was near Office Depot. I grabbed the cartridges and went to the checkout counter and proudly announced I would be paying with ApplePay. The guy said, “What’s that?” I explained it to him and he said, “I heard about that on TV!” So much for training at Office Depot, right? He rang me up, and then pointed at the credit card scanner where there was a logo that looked like a tap to pay kind of thing, and I held the iPhone near it and suddenly there was a TouchID fingerprint dead center on my screen. In my excitement I put my finger on that icon on the screen…like an idiot. Before anyone could notice what a dummy I was, I moved my thumb down to the real TouchID, and the onscreen symbol showed my fingerprint filling in and in just a second put up a nice checkmark showing transaction complete.

I was all excited and then the guy behind the counter said he didn’t think it went through. Weird because I had something saying “last transaction: just now, in Manhattan Beach”. He couldn’t find any evidence on his end though, so he went and got his manager. At least SHE’d been to training and knew about it but couldn’t figure it out either. She ran off to get a third guy. This guy seemed to actually know what he was doing. He explained to the first guy that he had to bring up the credit screen first. He had me TouchID again, and this time we saw a credit card number fly onto the screen as dots and then disappear. THAT time I got a confirmation saying exactly what the transaction was, so we knew it was real. There was still comedy to be had though, the guy said I still had to sign the little scanner device. Stupid.

I happened to need to go to a different Office Depot a second time this week and that time there was zero confusion at all and they didn’t make me sign at the end. The only reason I had a problem was I tried to get a screenshot of the thumbprint on screen, but that was really hard because you have to use the home button to take the screenshot, right? I was able to capture ti but it wasn’t easy.

Bottom line is that TouchID worked great with ApplePay and it actually made my life easier the second time I went to Office Depot. I walked there, and when I walk I have my phone anyway to listen to podcasts, so I didn’t have to bring a credit card or my license. Very cool stuff. Will be cooler when it’s everywhere of course.