This week there was a partial solar eclipse around 2 in the afternoon in Los Angeles. Steve suggested a play date up to the hills in Palos Verdes where we’d have a nice view of the city and the Santa Monica Bay, he could take video, I could take photos, and we could maybe play with his DJI Phantom Quadcopter with the GoPro camera attached. 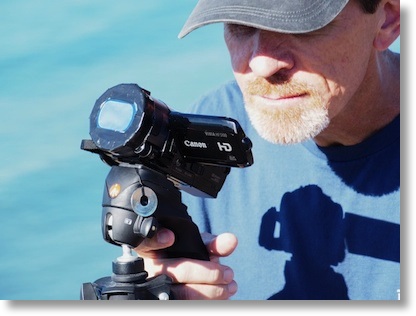 When Steve and I went on the Mac Mania Cruise in Australia, we were lucky enough to see a total eclipse of the sun. Steve bought me a very nice solar filter for my DSLR, but too late before the trip he realized that if he wanted to take video, he too would need a filter for his video camera. We had been issued official paper solar sunglasses for viewing the eclipse on the cruise, so he cut one in half, used a stiff paper program guide he found on the ship, borrowed some duct tape from our good friend Wally, and fashioned up a filter of his own to fit over his Canon HFS100 camcorder.

He’s great at keeping track of things (ok, maybe not his wallet and keys) so he actually still had his goofy filter. The duct tape when we were on the cruise 2 years ago was starting to get weird, but by now it was really starting to fall apart, so he dressed it up with a fresh coat of black electrical tape and he was ready to go.

In contrast, I have a tendency to procrastinate when it comes to getting rid of things but I’ve been making a valiant effort to be better at it. When I got my mirrorless camera, I knew that selling my DSLR quickly was much smarter than waiting, as its value would diminish fairly quickly. Instead of sitting on it like I usually do, I took photos and sold it through eBay and the lenses using connections on Facebook. By the way, hot tip – Facebook is a great way to sell stuff, because people know you and trust you. We actually sold one of our cars using Facebook!

So anyway, I had a lot of peripheral stuff that went with it. I gave the guy who bought my camera the little camera bag I had for it, and I sold the UV filters I had with the lenses. When I was all done, I had one filter left, but I couldn’t figure out what it was. It was really dark and had this kind of goopy mark on it. I had it out on the dining room table (where I set up my light box for taking fancy photos of my gear) for a long time. I moved it from downstairs to my desk and fiddled with it often. I tried cleaning it to see if I could get the goopy mark off of it, but I couldn’t. I still have leftover stuff from my original SLR camera from the 70s, so I thought maybe it was left over from that. I finally just threw it away.

So when Steve and I were getting ready to go out and view the eclipse, he asked me where my solar filter was. oops. I had completely forgotten that he had bought me this filter AND evidently it was quite expensive. Worse yet, he had bought an adapter ring so that he could mount it to his camcorder so he wouldn’t have to use his goofy little paper glasses contraption. So all we had left was the adapter ring. 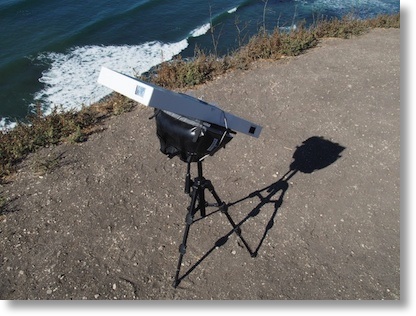 Sometimes you have to buck up and figure out another way to have fun, so I decided to make one of those pinhole viewers. It’s pretty easy to do. You only need a shoebox, some foil, a box cutter, some tape and a piece of white paper. I put a link in the shownotes to the instructions I followed to make my pinhole viewer out of a simple shoebox. The basic idea is you’re projecting the image of the sun onto a piece of paper so you don’t feel tempted to stare at the sun and burn out your retinas.

I wasn’t happy with my pinhole viewer though because the image was too small. I knew that if I could make a longer box, I’d get a bigger image. I got two Macy’s boxes, took the ends apart and taped them together to make one long box. I tested it out at home and sure enough I could see an image of the sun that was a lot bigger. Steve had the good tripod for his video camera, so I took the tripod that holds my LED light panel for the live video show. On the LED light panel, I have an inflatable lightbox, with a plastic egg crate thingy that helps diffuse the light. I realized that I could strap my long goofy box down to that flat surface. I made a couple of holders out of strapping tape and got a leather piece to tie around the box and I knew I could at least keep it from falling down or blowing away if there was some wind. We’re like McGyver around my house, am I right?

Off we went to Palos Verdes to have some fun. Steve got his camcorder set up with a wide-angle view so he’d be sure to capture the sun moving across the sky and the moon occluding it. He really wanted to get closeup footage of the eclipse though, so he zoomed in, put the sun off on one edge, and recorded until it got to the other edge. Then he repositioned the tripod and repeated this procedure. When he was done he had a set of three separate recordings that if stitched together properly would show off the progression of the eclipse.

When he got home, he imported the videos into Final Cut Pro X and got to work. He shrunk each video down by 50%, and then aligned the sun’s position at the beginning of one clip to the end of the previous clip. That left empty space around the three aligned videos since they didn’t fill the full frame, so he took a sample of sky and spread it across the entire frame as a background. Finally he sped it up 60:1 so that it’s a lovely 28 second video. I’ve embedded the video in the shownotes so you can see his masterpiece! 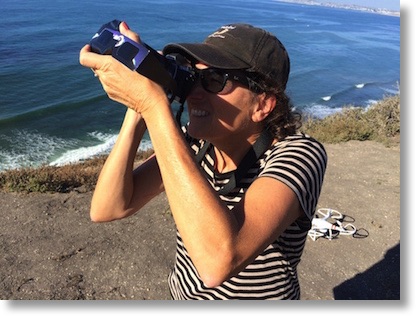 Now back to the viewing of the eclipse. Once he had his camcorder running, he didn’t have much to do. He watched me trying to enjoy this teeny tiny little view of the eclipse inside my pinhole viewer box. It was pretty cool actually, with his vision anyway you could see the eclipse and even a sunspot on the little image. In this day and age an experience doesn’t count if you don’t have photographic evidence though, right? I was trying to take pictures of the little image and not having much success.

Steve then got yet another marvelous idea. He still had one more pair of those paper solar sunglasses. He took his lens ring (the one that was supposed to hold the filter) and taped it to one of the lenses on the glasses. He then covered all of the air gap with black electrical tape. In this way I could hold the lens ring with the glasses attached over the end of MY camera lens and I could safely take pictures of the sun!

It worked GREAT! I got the best images around 1/80th of a second exposure, set the white balance to sunlight (teehee) and zoomed in to an effective 300mm. I put a small version of one of the photos in the shownotes but if you click on it you can see it in pretty high res.

The coolest part was the sunspot was insane – it was really fired up that day, and Steve sent me a message later that the sunspot had exploded into some massive solar flares shortly after the eclipse. 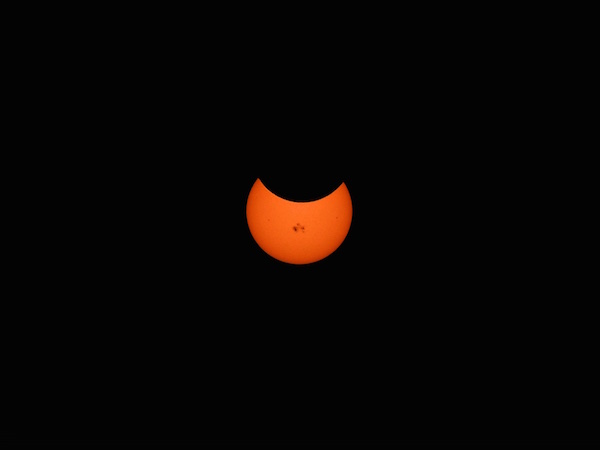 Anyway – I guess this is a story of me being a moron throwing away the filter, Steve being Macgyver and in the end us both being able to get some pretty cool imagery of a partial solar eclipse.

1 thought on “Capturing Imagery of a Partial Solar Eclipse”