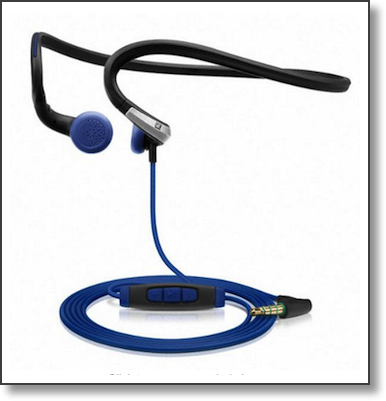 You’ve been hearing me review Bluetooth headsets for the last few months, and while the Jabra Sport+ Wireless Bluetooth headphones work great for Steve, no matter what ones I try work just fine UNLESS I put them in my Spibelt which is how I carry my phone to jog, wash the car, or walk the dog. I still like the Avantree Jogger Sports Bluetooth Headphones when I’m watching podcasts on my iPad at the gym, but the instant they touch my body they start to cut out.

I decided that after testing so many Bluetooth headsets, wired was the only way to go. I guess I should mention the problem to be solved here – it’s not high audio quality I’ve been looking for, it’s simply that the wires bang around hitting my hands when I’m jogging, or get caught on a rear view window when washing a car, or get pulled when two adorable white labs jump up and yank my brand new iPod Nano off my shirt and crack it. Of course those are theoretical examples that could have happened wearing my iPhone headphones.

I thought about just wearing my iPhone headphones so that the wire went down my back instead of in front, but the wire pulled the headphones out of my ears because they’re designed to stay in your ear by pulling downwards in front.

Then Kim Landwehr posted in our Google+ community that she was looking for earbuds that would stay in her ears when she gets sweaty while working out. Bart responded that he’s been really happy with the Sennheiser PMX 685i headphones. I took a look on them and realized they might be just what I needed. The Sennheiser PMX 685is wrap around the back of your head and just sort of suspend themselves in your ears. Since they come in from the back I thought they just might tolerate having the wire go down my back instead of in front.

I was pleased that they were in my price range as well at $50 over on Amazon.

I’ve mentioned a few hundred times that I’m not an audiophile so when we got the Sennheiser PMX 685is, I handed them straight to Steve who somehow found some music on my iPhone, and he was immediately impressed. For earbuds, the sound is fantastic, so much better than any of the Bluetooth headphones or the Apple EarPods. I know that’s not setting the bar super high but they really do sound marvelous.

I am also delighted in the fit and comfort. Like I was hoping they are super light and I can barely tell I have them on. They have the necessary iPhone controls on the wire – volume up/down and a microphone built in, and you can play/pause your audio and answer the phone. I did test the audio in a call to my daughter Lindsay and she said it sounded just fine.

Sennheiser includes a little clip for the wire that turns out to be super useful, especially for me to keep the wires running down my back. I can easily clip them with one hand on the back of my shirt, giving me a nice service loop to move my head without ever feeling the wires pull. Just as I’d hoped, having the wires down the back does not pull the headphones out of my ears, they’re tolerant of my level of sweat and they sound fantastic. The wires might be a smidge too long for me, but I just fold the wire once or twice into the Spibelt and it’s all good.

I can really recommend the Sennheiser PMX 685i Adidas Sports In-Ear Neckband Headphones. And of course I included my Amazon Affiliate link all over the blog post!