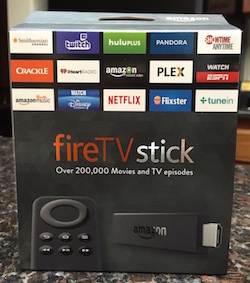 Hooked up to our TV we’ve got a TiVo, a Mac mini, an AppleTV, a Roku, and a Chromecast but when Donald Burr tipped me off that the Fire TV Stick was coming out and for 2 days Prime members could get it for $20 (normally $39), I immediately had Steve check to see if we had any open HDMI ports left on our receiver. In the search for the holy grail of TV watching, we added the Fire TV Stick to our arsenal when it arrived today.

Now what problem do I hope the Fire TV Stick will solve for us? We already get Netflix on every device we own, including our toaster I think. We get Amazon Video on the Roku that works really well. We haven’t done the Plex thing to play our movies (yet) but a few of our devices will do that when I get around to it. The AppleTV is great for renting movies and watching the keynotes and we use Airplay every single day to fling video podcasts to the TV, but I hate that little remote with a passion and it doesn’t get Amazon. I love the remote for the Roku. It fits so nicely in my hand and it’s much easier to turn on subtitles than it is on the AppleTV. Unfortunately it shows me what I’ve watched on Netflix in the reverse order of the AppleTV so I get confused easily. I don’t do much but Netflix and Amazon with it but the experience is good. The Chromecast is more of a novelty item. When I do launch it, I get confused looking for the remote till I remember there IS no remote. For us it’s like Airplay but harder to figure out, so the Chromecast is not much use to us. 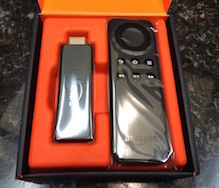 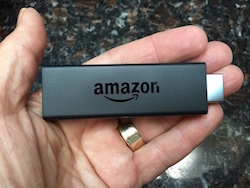 The Fire TV Stick was very nicely packaged. It comes with a remote that looks about halfway between the AppleTV and the Roku. Not as comfortable as a Roku but way better than the AppleTV. It has the same ring for forward/back and select as the AppleTV, a back button, home button, play, fast forward and back buttons. it also has a 6th button that looks like the hamburger icon in iOS apps, three horizontal lines. 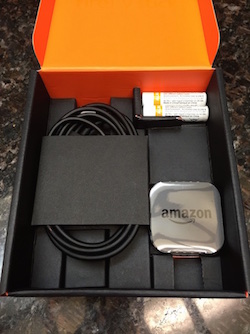 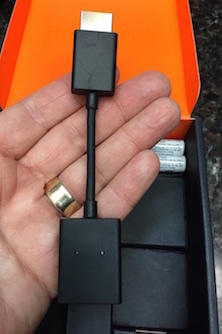 For extra money you can buy the fancy remote for the Fire TV Stick that lets you use voice control to search. I wasn’t interested in extra money for that feature, especially since it only searches within the Amazon app, nothing else. The Stick is about the length of my fingers, and around an inch wide. We were immediately worried it would be to wide to jam into the HDMI ports because it would hit the connectors on either side. Luckily Amazon includes an HDMI extender cable that makes it fit perfectly.

It also comes with a very nicely packaged power plug and a good long USB cable. That means the Fire TV Stick, like the Chromecast, requires power which is a bummer. Speaking of power they even included two double A batteries for the remote. The USB power cable sticks out of the side of the Fire TV Stick which at first struck me as a bit odd, but then I realized that the limiting space factor for many units is the space behind the device, so power coming out the side could be an advantage. It’s a funny looking little mess when you get all the pieces put together. 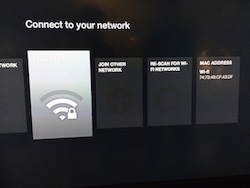 When we plugged it in, (and after fighting with the receiver remote to try and figure out which input we’d selected) we were greeted with an on screen guide to set up wifi. I expected typing to be as annoying with the ring on the Fire TV Stick remote as it is on the TiVo and AppleTV and Roku but it had one rather nice tiny little feature. You know how you can’t go flying across the virtual keyboard because it will go past the keyboard and highlight something else like done on the right or back on the left? With the Fire TV Stick it stops at the end of the row. I know, it’s small but it made me REALLY happy. 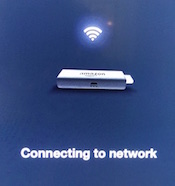 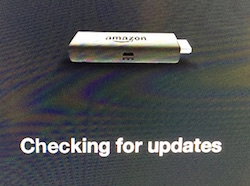 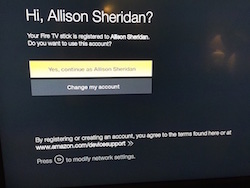 It sat on the connecting to network screen for a bit, then decided to check for updates which gave me time to go pour another refreshing beverage. After that though it asked me if I wanted to continue as Allison Sheridan. Ever since my first Kindle reader purchase it’s always freaked me out when they do that. Some how they’ve connected my purchase order to the device itself. It’s freaky I tell you. On the other hand, it’s super convenient because I didn’t have to enter any passwords. On the third hand, if you buy a Fire TV Stick as a gift (or any Amazon direct product like this) you might want to check into how to not have the receiver have access to your account. I wonder if their system is clever enough to recognize if you’ve tapped the box that says “this is a gift”? 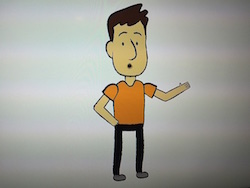 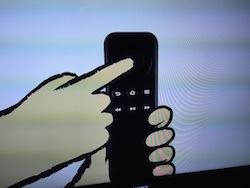 Next up a nice little cartoon man came on screen to give us a brief introduction to the Fire TV Stick. I know it’s dumb and I know it’s cheesy but it did actually make me feel comfortable with the interface. He even showed us how to push the home and back buttons on the remote! He told us about what channels we could watch – and get this – he said Netflix BEFORE he said Amazon. He even said, “shows like House of Cards”! Like I said, a nice little introduction. 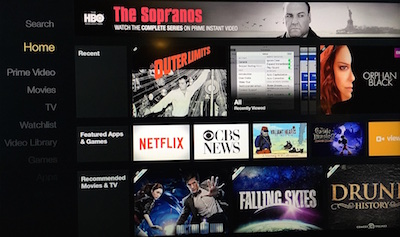 The interface on the Fire TV Stick is very clean. It’s a dark theme with a list of things to go through on the left, (like Home, Prime Video, Movies, TV, Apps, Games). The selected item is bright yellow while everything else is a muted grey. To the right you get nice big thumbnails of the shows and channels. Here’s what I noticed the most about the interface – it got out of our way.

Very quickly we thought, hey, there’s Orphan Black, let’s watch another episode. We fast forwarded easily, backed up 10 seconds, went forward easily, we even found subtitles easily. Remember that little hamburger button? That brings up options like subtitles and to jump to the next episode (which we also used!) When we were done watching Orphan Black (which is an AMAZING show by the way) we saw Outer Limits and remembered we still have a lot of those left to watch and we moved on. We watched three shows…not noticing that we’d gotten a new device. We had no confusion and it worked really really well.

This is a first look so the proof will be which remote we reach for in the future when we want to watch some non-Apple specific content but for day one, the Fire TV Stick from Amazon was awesome.

4 thoughts on “Amazon Fire TV Stick Lights it Up”