My daughter Lindsay (you know her as Jibblies in the chat room) told me the other day that there’s one thing she misses from Windows 7 on the Mac, and that’s the ability to have a window snap to the left or right half of the screen (or top/bottom half). She loves throwing things out to me like this because she knows that I’ll either know the answer for her or I’ll find it.

Here’s another problem to be solved. You’re making a screencast (say, when you’re standing in for Don McAllister on ScreenCasts Online) and you know you’re going to be working on it over the course of a couple of days so you need the windows to always be in the same position even if you disconnect your external monitor or change screen resolutions between sessions. Imagine you’re watching a video screencasts and the window is on the left and suddenly jumps to the right a half an inch. Even a few pixels jump is really jarring so you need something to precisely place the windows in a predictable and pleasing location on screen.

What if you like all of your normally running applications to be “just so”. Let’s say you like Twitter in a long vertical column on the right, you like Safari dead center on the screen, and you keep Messages up along the left side of the screen. Every time you boot up or whenever you do a non-standard task, you have to spend a couple of minutes arranging windows just the way you like them.

One tool will solve all three of these problems. It’s a little utility called Moom from Many Tricks manytricks.com. It’s also available in the Mac App Store for only $5. 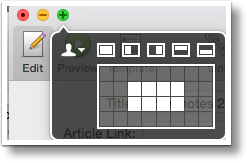 Moom can run as a standard application, a menu bar application or as a faceless application. I guess if you get everything set up the way you like it you might not want Moom hanging around being visible, but if you make Moom faceless you have to launch it manually in order to interact with it. We’ll start with the easy things you can do with Moom and then get into the higher level functions you might also enjoy.

Once Moom is running, every OS X window will have an enhanced feature. you know the three stoplight buttons on OS X windows – the red, yellow, green ones? Now when you hover over the green button you’ll see a grey menu float down. There will be five standardized buttons, full screen, left half, right half, top half or bottom half. These left/right and top/bottom combos can be really useful when you’re comparing things between two windows or you’re moving things between Finder windows. A simple tap of one of those buttons and your window automatically resizes.

I showed this to Lindsay and she said, “Okaaayyyy…but on Windows 7 all you have to do is drag the window where you want it and it automatically rescales and clicks into place. I didn’t think Moom could do that but a few days later I accidentally dragged a window to the top of the screen and while I was dragging a dotted blue outline of the window appeared showing me that it was going to make it half screen on the top. So for $5 Moom does EXACTLY what Lindsay wants it to do.

I recently discovered a bonus prize which you may have thought of already but I’m kind of slow. In Mavericks and before, clicking the green button would cause your window to fill the screen but still leave you in the normal space so you could see your menubar and switch between applications. If you wanted to do true full screen in a new space, you had to tap the double ended arrows in the upper right of the window. In Yosemite, the behavior changed so the green button does full screen in the new space and we lost the ability to fill the screen with a normal window. Remember I said there were five buttons on Moom’s defaults and one was full screen? That button returns the functionality of the green button to the Mavericks days. This is essential to me as some applications still misbehave in full screen. For example, I once accidentally made the Chrome window with the Google Hangout On Air for the live show full screen, and it would not come out of that mode! I couldn’t switch spaces and I couldn’t get out of full screen so I actually had to quit the Hangout on Air and start over. Really really annoying!

Below the five buttons you’ll see a grid. This grid is very cool, by dragging across it you can create where you want the window to land. let’s say you want it nicely centered but not full screen, you can drag across the middle of the grid and the window instantly jumps to that position and size. Again Moom shows you the blue outline as you’re drawing so you can adjust the size and shape live while you’re dragging. If Moom just did the functions I’ve already described, I’d think it was EASILY worth the $5 price of admission.

The behaviors I’ve described are controlled by Moom Preferences where you can modify what happens when you drag to the sides of the screen. I noticed in here that you can even go quarter screen if you drag a window to the corners. If you’re more of a keyboard junkie than a mouse lover, the keyboard controls in Moom are awesome too. You can use a keyboard trigger to pop up a menu that lets you control the size and location of the frontmost window using another keystroke. So for example, the default trigger is control-shift-z. If I tap that I can then hit the space bar to make the window full screen, or I could hold down the command key and hit the right arrow to make my window pop to the right half of the screen. I think if you use Moom a lot this would be really handy but my memory isn’t quite good enough to get the hang of it so personally I just use the mouse.

Now let’s take it up another notch. You’re ready for the Custom tab. It’s crazy in here and I don’t begin to suggest that I’m good at using these advanced functions yet but I’ve seen enough to know that it’s super useful. I’m easily distracted so I get too many windows cluttering up my view on my main display. I found a custom control where I can assign a keystroke to simply banish a window to my other display! You can set up custom controls to define the precise size and location of a window (which is what I use when I’m doing the screencasts).

The most amazing custom control is called Arrange Windows, which allows you to save and restore the positions of windows in all open applications. That’s for the super OCD person who likes things “just so”. Come to think about it, I should use that for the live show, I’ve been rearranging windows every week to set Garageband on the left, Feeder on the right, a Finder window in the center bottom, etc. I’m going to finish up this review so I can get everything “just so!” Head on over to Many Tricks at manytricks.com and check out Moom yourself.

4 thoughts on “Control Your OS X Windows with Moom”