Back in July I wrote a blog post entitled “Top 5 Menu Bar Apps” in response to Tammy’s question of what my favorite apps were. In my top 5 was a menu bar app called Jettison, and I sang its virtues for letting me very quickly eject external drives and put my Mac to sleep in a single gesture. I was very enamored with Jettison but it has gotten flaky on me in that it won’t launch at login every time. So imagine the value drop when you have to launch an app in order to eject and sleep? Not really very useful. To be fair, I never contacted the Jettison folks to see if they had a fix.

I bring all this up because last October, I got a comment on that blog post suggesting an alternative called Mountain from appgineers.de. For the last two months I’ve been moving it out every week hoping to get time to take a look at it, and finally that time has come.

Mountain’s reason for being is to allow you to quickly mount and unmount local drives, servers, and disk images. It runs as a menu bar app so you’ve got easy access to it’s services. There are three categories of things it can play with: 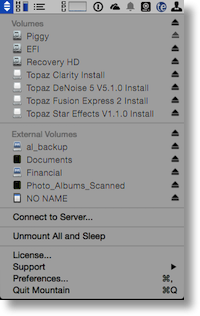 Internal volumes really surprised me at first because in the default installation, Mountain exposes not just my boot volume called Piggy, but also the EFI Firmware volume and the Recovery partition! I didn’t want to go messing around accidentally ejecting those volumes, so I walked through the Preferences and under Customize I was able to modify the interactions with each drive. Boot volume Piggy was defaulted to prevent unmount, but EFI and Recovery were not so I set them to prevent unmount. I have to say it’s rather disconcerting to even see those volumes on my desktop, so I also unchecked “Show system volumes” and while they disappeared immediately from the Mountain menu, I had to do a full restart to get them to disappear from my desktop (a log out didn’t do the trick).

I think the External volumes section will be very useful for me. I bought a 3TB backup drive recently (during the great Drobo migration of 2014) and on it I created a 1TB partition for back up of Piggy, and left the other 2TB as a drive called Open. Both volumes mount when I plug it in to run a backup, but to eject them I have to eject one and then click on yes to say to eject both. With Mountain I can simply tap the eject button next to External volumes and everything ejects. Mountain even gives you a nice notification as the volumes disappear. I should mention that if you don’t want all volumes ejected you can uncheck that preference under the Advanced tab in Mountain.

I was glad to see that my mounted Drobo volumes did stay mounted, even though they were listed under External. I suspect Mountain’s ability to control things was overridden by the Drobo Dashboard controls that say to keep them mounted.

I tested Mountain with VoiceOver and everything was accessible. The eject buttons were simply labeled “button” so I sent a note over to Jan at appgineers.de suggesting him that labeling them would be swell. He wrote back to me immediately telling me that the accessibility of Mountain was something of which he was proud and asked if I could elaborate on exactly where I was hearing button instead of eject. I made a short screencast for him illustrating the problem (and apologizing for my crude VoiceOver skills). Again he responded very quickly back that the video had showed him the problem area, he’d been able to replicate it and he was going to incorporate the fix in the next release. I love how responsive Jan is to his customers! AMMENDMENT – After this was published, Jan released a beta version of Mountain with the buttons correctly labeled as mount and unmount. Link to the beta download is at the bottom of this blog post.

Mountain gives you a lot of control on how many and what type of notifications you can receive in the Alerts preferences. You can be notified when volumes become available, are unmounted, when it’s safe to remove external volumes and more. If you’re a fan of Growl you can even enable it’s notification services instead. I didn’t get a chance to mess around with the Server controls because I’m not actually running any servers in my house, but I was intrigued to see that in the Advanced preferences tab you could choose to have favorite servers mounted on wake from sleep. That sounded pretty handy.

I just realized I didn’t even talk about the most useful feature of Mountain for me, and that’s the ability to pull down to “Unmount all and sleep”, slap the lid shut on my laptop, unplug all drives and cables and run out the door. I used to love that feature on Jettison and now I have it back with Mountain. Of course all that other functionality is awesome too!

Another great reason to go straight to appgineers.de is that Jan provides a free trial version. Instead of working for 7 days or 14 days, it works for 30 minutes. That lets you try it as many times as you like in different circumstances, but puts enough friction into it to make you buy it for the measly $6 he’s charging! And as if that wasn’t a good enough reason, after Jan and I had chatted back and forth several times, he suggested a limited time only discount code for NosillaCast listeners. If you enter coupon code NOSILLACAST through the end of January at appgineers.de you’ll get 20% off! So we’ve got a cool utility, it’s inexpensive, the developer is really helpful, it’s an accessible app, AND you get 20% off. What more could you ask?

8 thoughts on “Manage Your External Volumes with Mountain”