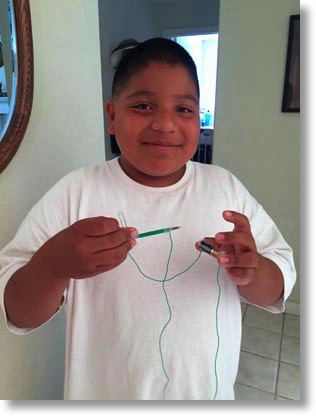 My housekeeper Rocio has been working for us for years. This summer her soon-to-be 13 year old son has nothing to do so she’s dragging him along to work so that he doesn’t sit home playing video games all day or get into some kind of mischief. I think Rocio is brilliant to do this because she’s drilling into his head that if he doesn’t want to do a job like this for the rest of his life he’d better do well in school. You can imagine that as a 13 year old he’s riveted to her every word and thinks she’s as brilliant as I do, right?

I started thinking, what if I could give this kid some stuff to do that stimulated his mind while she was working, maybe I could get him interested in my favorite subjects, science and math. He may not be interested in these subjects and I may have no effect on him, but what if he took a liking to it and had a real aptitude? I figured there was no harm in trying so I asked his mom and she readily agreed.

You heard me talk last week about littleBits, the hardware modules that a kid can stick together with magnets to do wonderful, magical things. I sat down with him last Thursday and started to walk him through how to play with them. He’s a REALLY quiet, shy kid and didn’t say much but I started to see a flicker of interest in his eyes. I have no idea whether this kid is the next Richard Feynman or has sub-par intelligence but I figured why not assume he was brilliant? In my opinion, with children if you set the bar low for them they’ll gladly meet your low expectations. If you set the expectations high, they often meet that as well.

We put an LED up against a light sensor and got it to turn a motor. We connected a speaker to my cell phone and added power and heard the sound. We used a microphone connected to the speaker and heard our words come out. It was great fun.

Based on this theory of mine, I started saying things like, “I knew a kid as smart as you would love this stuff” and “You really have a talent for this, most kids aren’t this good at it when they start.” The smiles got bigger as we did the experiments. I mostly guided him through this first effort but he started to take baby steps with it. I called his mother over and said, “Look what HE made!” and convinced him to tell his mother what HE had created.

A day later I got the most awesome text message from his mom, Rocio. She wrote,

OMG thank you VERY MUCH for spending some of your time teaching my son!! We were at my mom’s house and he was telling my family what he learned he is really EXCITED i could see in his face that he really liked it 🙂 When we left ur house he ask me rite away if he could come next week!!

I’m still grinning ear to ear about it. But this week I had to keep his interest level up, right? Can’t just drop him now. This week I decided to go with something to get his hands a little dirtier, I decided to teach him how to make a magnet out of some wire, a battery and a nail. If you never got to do this yourself, it’s great fun. You take a very thin wire, the kind with shielding on it, not bare wire, and you wrap it around a steel nail. The nail must be steel because it must have iron in it or the experiment won’t work. Then you strip the ends of the wire back a bit, and hold them onto the opposite ends of a AA battery. The tip of the nail will be magnetic! If you search the Internet for wire nail battery experiment you’ll find tons of tutorials online showing how to do it.

Michael Faraday in the 1820s studied the connection between electricity and magnetism (now the field called electromagnetism) and is credited with the practical usage of these tools. I explained this to the young man and then showed him my favorite use of electromagnetism. It turns out that not only does flowing electricity through a wire induce a magnetic field, you can use the reverse as well. If you put a bar magnet inside a coil of wire (held away from the magnet) and you send an electrical current though the wire, you can make the magnet move. I took him over to our stereo speaker and pulled the protective cover off to show him the real face of the speaker. I explained that as the stereo pumped electricity to the speaker, it was moving a magnet in and out that moved the paper face of the speaker which in turn moved the air to make the sound in his ears. Not sure he followed all of this but my father always said to think of teaching children like trying to pour a bucket of water into the neck of a wine bottle – not everything will get in but pour enough and enough times and some of it will get in!

I think my favorite part of this second session was when we’d exhausted the fun of the wire magnet and he asked to play with the littleBits again. I didn’t help him at all, just played on my laptop in the room with him and I heard the most wonderful words come out of his mouth. He said, “I wonder what would happen if…” I almost cried with joy. He played with it for another half hour and kept making up his own experiments (many of which failed but I never told him they wouldn’t work) and over and over he said those joyous words, I wonder what would happen if…

10 thoughts on “I Wonder What Would Happen If…”