It’s summer time in the northern hemisphere and all of the little munchkins have detailed plans on how to spend their vacation. These plans include sleeping in, eating cocoa puffs in front of the TV watching The Price is Right and maybe fill out the afternoon playing video games. If you’re lucky they will work in an impromptu soccer game outdoors to get some fresh air and exercise. This sounds like a grand plan but about a week later their brains have turned to mush and they’re whining about being bored. And there’s our problem to be solved.

Enter littleBits from littlebits.cc. Think of littleBits as a cross between Heathkit and Lego. littleBits are these little bitty modular components that you stick together with their built in magnets to create circuits that do something. Let’s start with the simplest example. Hook a 9 volt battery up to the power switch (using a standard 9-volt connector). Then stick a motor module to it. Turn on the switch, and the motor turns. Yay – our first circuit! It’s literally as simple as that to get started. No soldering, no wiring, just click the components together and see what happens.

I got to play with littleBits because our good friend Pat Dengler bought the Space Kit and left it with us to let us play. I finally got around to it this week and had a blast with it. The kits come with instructions, and you know how I abhor reading instructions, but I decided to read up just a little bit (get it?) In the instructions they show a picture of the component so you can find it in the box and then tell you what it does. For example, under Power p1 it says “This power module lets you use a 9-volt battery to supply electricity to your other modules. Snap in the battery & cable (both included) and flip the switch to turn it on. 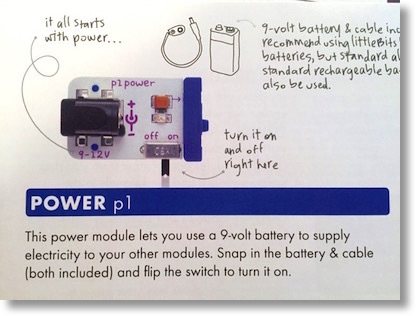 It might be hard to get a kid to read these instructions but if you can keep their attention say through the first couple, then when looking at a new module they might say, “What’s this one do?” and then you know you can go back and read just a couple of sentences to get the idea. At least that’s how MY attention span went! littleBits comes with a whole pile of things you can build with easy to follow instructions. I found that very quickly I wanted to start inventing my own things rather than follow the rules. You’re shocked at this I’m guessing.

Once I’d done that I figured I needed to read up on more of the modules. I found the bright LED module. Hmmm. that would be a fun source for the light sensor, yes? Then I realized since these things stick in a line all together it would be really hard to get the sensor to see the LED. Read a little more and found they include what is simply called “Wire” It’s a wire with a magnet on either end. That should do it! So I put battery then power switch then light sensor then wire then bright LED then motor all in a row. Now I could lift up the light sensor, hold it over the LED, and the motor turns like crazy. Again, I made FIRE! And all with my imagination after just a teeny bit of instruction.

One of my pet peeves is that kids today are taught to follow instructions when playing with toys. Bart showed me a fabulous photo from his childhood where his parents had dedicated the attic to his Lego. He had built all of these crazy structures and I’m just guessing he didn’t do it by following step by step instructions. Lego is the worst about this – tricking you into buying more and more kits that only make one darn thing. Sure building a pod racer is cool but then it’s done and you haven’t used your imagination at all.

I was at my friend’s house who has this awesome 4 year old son who is positively brilliant. He had this cool toy that was a bunch of magnetic triangles and rectangles. I tried to play with him and he said he needed the instructions so we’d know what to build. I suggested we just invent something and so we started to play, and then his mother came over and tried to force the instructions on us! I was there to make her stop but I figure this wonderfully imaginative brain is being squashed into the tiny little adult boundaries way too early. If you do check out littleBits I really encourage you to read a bit of the instructions but as quickly as you can go off the rails and see what you and your kids discover.

littleBits are not inexpensive, the starter kit is $84.50 and comes with 10 modules, and of course you can buy more involved kits if you find it’s really fun and your children start to get interested in designing and building things on their own. Pat loaned the Space Kit that you can use to build a Mars Rover (you have to use paper and scissors and glue and tape to build the structure of the rover but you use littleBits to make it drive around. That kit is $149 and comes with 12 modules, 5 NASA lesson plans and 10 STEAM activities (yeah, there’s an A in STEAM but we’ll vorgive these guys). You can even build an ISS with it!

The littleBits website at littlebits.cc has tons more instructions than what you get in the boxes which means the opportunity to mix and match to build new things is practically endless. Unlike my Lego pod racer example, you don’t just build one thing with these kits. There’s also a huge community to play with so you can stretch out beyond the boundaries of what even littleBits had in mind. You can turn on your blender, make a wifi-enabled device, create a notification device so your bunny can email you when she’s out of Kale…seriously imaginative stuff! I put links in the shownotes to the kits I talked about over at Amazon and of course a link to littleBits itself. littleBits suggests their devices are for age 14 and up but I think they underestimate the kids of today – I’d definitely try this out on a 10 year old!. One more fun thing for the serious nerds in the audience – littleBits is written in Camel Case.

You could stimulate a future engineer or scientist this summer, or, you could let them watch The Price is Right. Your call.