Allister here, taking my turn to stand in for the vacationing Allison.

I’m a huge supporter of the OS X operating system and often try to gently drop hints to those second class citizens we call Windows users about how great we have it. But in the interests of objectivity, I do always admit there are flaws. One of the biggest flaws I warn people about is how OS X handles network volumes. That is, drives on another Mac, connected to a router like an Airport Extreme, or on a dedicated Network Attached Storage, or NAS, device.

My wife and I run a small business and one of my roles is creating assets in the form of PDF documents and images. My wife uses the images online and the prints the PDFs to create our products. So the problem to be solved is how can I create and maintain these assets on my Mac while giving my wife access from her Mac to use them as needed?

The first method I used was a regular USB hard drive connected to my Airport Extreme. This came with several problems. The drive would spin down after being idle for a while and then when needed would take quite a while to spin up – and there is no way to control this. It would also fail to spin up on occasion and I never figured out why. The only solution was to unplug and reconnect the drive or power it off and on. One of the reasons we use PDFs now is because when I put the Pages original documents on the network drive, I lost access to OS X’s file versioning capability – it does not work on any drive not directly connected to your Mac.

The next thing I tried was keeping the files on my Mac and sharing the folder to my wife. The problem here was if there was any issue with my Mac, the files would become unavailable to her. Any time I wanted to reboot or turn my Mac off I had to consider whether she’d be wanting any of the assets. At the time my Mac was a laptop so there was also a chance it wouldn’t even be around. Plus, sometimes her connection to my folder simply stopped working even when my Mac was fine. Finally, if she needed to edit a document, versioning was unavailable to her, even though it was available to me. I considered swapping the files onto her Mac, meaning availability would be guaranteed for printing, but then I couldn’t create new assets if her Mac was turned off, which it frequently is, and then I lost access to versioning.

In short, it looked like any means of sharing the files with built in OS X network sharing capabilities was going to be problematic. Enter BitTorrent.

Now, many of you will immediately think of software or media piracy when I say BitTorrent. But BitTorrent is a fast, efficient, peer-to-peer file transfer protocol that is as much to do with piracy as email is to do with spam. There are good uses for BitTorrent, too. One I came across years ago was for downloading Linux distributions which are very large and, at the time, bandwidth was limited so efficiency was desirable. BitTorrent allows for splitting a file into many parts and sourcing those parts from whereever they are available. 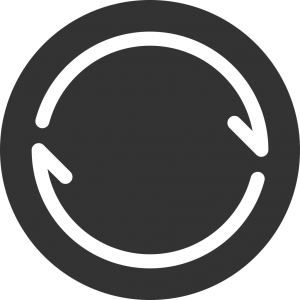 To specifically solve my problem, I turned to a free product called BitTorrent Sync (hereinafter referred to as BTSync) which is made by the BitTorrent company themselves. BTSync works kind of like a private version of DropBox, except there’s no master storage location for your files and no central cloud. Once you share a folder – and you can share as many folders as you like from any drive – and you sign up two or more devices to that folder, BTSync keeps all the contents of the folder in sync between the devices. It does this by finding the shortest path between them. If they happen to be on the same LAN, it transmits locally. If they happen to be on opposite sides of the world, it uses the internet. And all this communication is done securely over SSL with X.509 certificates. Whatever those are.

Because all devices constantly keep an eye out for others, it doesn’t matter that any device is unavailable. As soon as two devices are on at the same time, they will sync their files. I said before you could sync any number of folders, and that makes it quite different from DropBox. Instead of thinking “I want to sync this so I will put it in DropBox” you think “I want to sync this, so I’ll sync the folder.” My wife and I sync two folders – one for the assets previously described and one for general files we may wish to share.

But BTSync can do more than sync amongst your own devices. You can sync folders with other BTSync users – still without using any cloud server in the middle. You cannot share individual files in this way, but you can always create a folder which you share with a specific individual or group. I’ve been using DropBox in this way anyway, so it’s not a new concept for me.

Earlier I said BTSync was free, and it is. But for a one-time payment of $40 you can upgrade it to the Pro version. For that you get some additional very cool features including automatic adding of folders (in the free version you need to take action on each device when a new folder is added), and the very nifty Selective Sync. Selective Sync syncs placeholder files to your devices and then when you open a placeholder, BTSync will download the real file on the spot and open it. This means you can have a folder full of large files and other devices needn’t have the space allocated to keep them all locally.

BTSync is doing a fantastic job of keeping my files in sync between my and my wife’s Macs. I’m only using the free version and that’s all I need for now. It is possible to access OS X’s versioning capabilities on synced files, but that versioning is not shared across devices. However, BTSync has its own form of versioning, keeping old copies of files for 30 days when they change or are deleted, so you’re protected against accidental actions if you notice them at the time. There is also an iOS app which can give you access to your files on the go.

You can check out BitTorrent Sync at getsync.com. Also check out the recent MacStories review which I found very informative.

1 thought on “Network Not Work! How I Solved My File Sharing Problem With BitTorrent Sync”