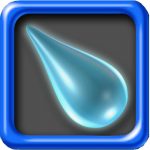 Before my husband and I head out on a new cruise, I like to find some new games for my iPad to while away the hours between ports.

This year I found an intriguing game called Enigmo from Pangea Software. There’s also a sequel Enigmo 2. Both priced at $1.99 from iTunes.

Quoting from the manual:

Enigmo is a 3D puzzle game where the goal is to use the various puzzle pieces to direct droplets into their containers. The faster that the containers are filled, the more bonus points you get. There are three types of liquids in the game: Water, Oil, and Lava. There is a specific container for each. Once you have sent at least 40 droplets into each container, then you have completed that level.

A number of puzzle objects are provided to direct the droplets into the containers. You use basic drag and drop to position them as needed. There is a link to a web-based instruction manual.

It was designed for iPhone, but works just fine on an iPad. The graphics are clean and crisp and the overall design is pleasing, if a bit dark.

Enigmo has a connection into Apple’s Game Center. Game Center is an online multiplayer social gaming network. It allows users to invite friends to play a game, start a multiplayer game through matchmaking, track their achievements, and compare their high scores on a leader board.

Since I’m not into socializing of any kind, I try to avoid Game Center like the plague, even when, as happens with some games, it gets into your face with every move. I only mention it here for the FaceBook crowd who enjoy sharing. I do not. Happily for me, Enigmo provides a link to sign on, but that’s it. Easily ignored. But moving on… 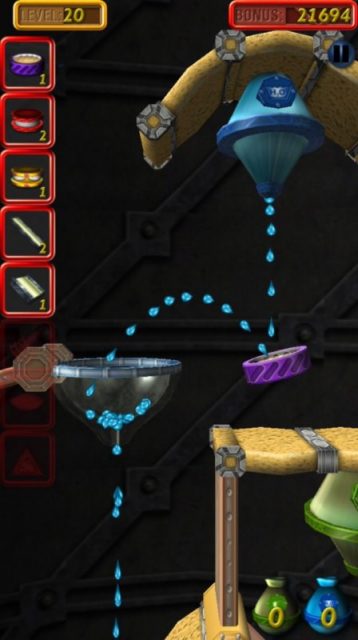 I played a few levels and here’s what I found:

First read the manual, if only to learn what the different puzzle objects do. I jumped into the game and then had to fumble around, losing time, figuring out how each object type worked.

Each level starts with a small set of puzzle objects to use (different for each level) and a scan of the setup so I got a good view of the level’s objective. The set of objects is displayed on the right and is always visible. I can double-tap to place an object in play or to remove it. I found the puzzle objects are easy to move and position but a bit fiddly to get exactly right. Practice makes perfect.

There’s a tiny question mark for built-in help, but only through level 3. After that, I was on my own.

The game provides clear sound effects, but the endless running water sound can annoy. However it’s easily turned off.

While I did enjoy the game, I give it minus points for
• Having a timer that counts down points very fast and that starts before I really know what was happening. The idea is that the faster you complete the level, the more points you get. But you get no warning. I wish there was a GO button to start. Instead it takes off as soon as the display completes. Maybe this won’t be so irritating when I get used to the game. Also there is a handy pause button. But I really hate having a timer.
• Also it tells me my score when I complete a level, but there doesn’t seem to be a way to go look at it as I play.

Between each level, I can save the game (along with all my points) and continue to the next level. Or I can abandon my feeble efforts to date and start a new game from level 1. There is room to save five different games which I can then jump into at any time.

The game lets you buy more levels (using real money). While in general I’m wary of in-app purchases, this seems fairly benign. I won’t know for a while if I will want to buy more levels. Time will tell.

Over all I found Enigmo to be a moderately entertaining game. It was oddly soothing to watch the little water droplets bounce around. Kinda like making fountains with the garden hose until Mom yelled at me to stop. Definitely a game worth keeping around and maybe I’ll even buy more levels. Or move on to Enigmo 2. This game truly reminds me of Cat Physics, only with drops of water instead of bouncing balls. And I can play Cat Physics for hours.

That’s Enigmo from Pangea Software, available for $1.99 from iTunes.