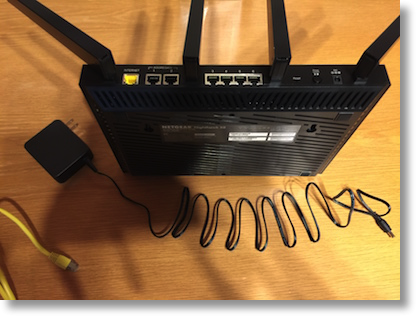 Well Castaways, it was time to replace our router.

Our ISP caps our bandwidth to 450 GB per month and several times a year they assert we use double this or more. We don’t stream a lot of movies, our cloud data is pretty static, and we have a stupidly complex password, so this runaway bandwidth is a mystery I cannot solve with our aged Airport Express router.

We also need the ability to manage a lot of WiFi devices.

The wiring closet is at the far back of the house, which has always caused connectivity problems in the front of the house.

Wanting a router that would be current for a few years, I chose the tri-band Netgear Nighthawk X8 AC5300 Smart WiFi Router. I purchased it on Amazon using Allison’s banner and paid a whopping $359.99. It’s definitely an investment.

As the dedicated network and software tech in my house, I dreaded this project like the plague. I removed all the old equipment, crossed my fingers and plugged in this huge beast.

I was pleasantly surprised by how easy it was to set up. There is an iPhone app, but I found the most convenient way was to log in via browser.

There is a security bulletin on this router that Allison kindly forwarded over once she learned of my purchase.

A few things I have not tried:

I don’t like power bricks that block other outlets so I wish they either built it into the box (probably too much heat for that) or put it in the middle of the cord where I could hide it.

It’s huge – almost twice the size of my Airport Extreme.

It is capable of being wall-mounted, but they didn’t include any hanging hooks. That would be a nice bonus for a router costing almost $400. In fact, some command hook solution would be great. They could throw in some velcro ties as well.

I think this is a good choice if:

You’re concerned about range.
You have a lot of home automation.
Your tribe is fighting over WiFi.
Your ISP caps your bandwidth.
Your router conflicts with your neighbors and you can’t control that.

I give this router five stars for ease of setup and configuration. So far, very stable WiFi connections. I clocked outdoor WiFi speeds of 15 Mb/s in the backyard, and 4 Mb/s in the furthest point from the router.