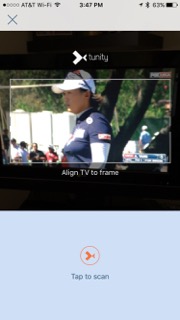 Have you ever been at the airport and there’s breaking news on the TV but you can’t hear it? How about you’re out at a bar and there’s a game on and you’d love to be able to hear it? What if you could get the audio sent to your smartphone? Well that’s exactly what Tunity from tunity.com can do for you.

Tunity is available for free in the iOS App Store and the Google Play store. When you launch Tunity for the first time, you’ll be asked to create a free login or you can use Facebook to log in. Next you’ll be required to turn on location services for the app. I’ll explain in a minute why that makes sense.

Once you’re logged in, you’ll see a simple screen that says “tap to scan” and there’s a rectangle you’re supposed to align your phone or tablet’s camera to the frame of the TV. You have to hold the phone still while it scans, then it will say detecting, and if it recognizes the channel you’re watching it will come back and say “Syncing to” and the name of the channel. A second or two after that, you’ll hear the TV channel’s audio coming out of your phone! Seriously. It’s like magic. 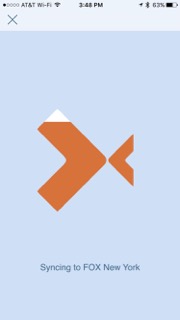 One thing to be aware of, when you scan a show, make sure it’s not on a commercial because the app simply won’t be able to find the show. It has to be the real-time show that’s being broadcast.

Tunity isn’t using some wireless connection to the TV you had it scan, it’s doing image recognition of the video to figure out what channel you’re watching, and then broadcasts the audio to your phone over WiFi or cellular data. When you acquire the audio signal for a show you want to watch, you can walk away from the TV and go anywhere. You can even drive away, right? So think about using this when you’re vacuuming, or gardening, if you want to listen to a favorite show you can take it with you. The only problem is that if you stop listening or lose signal, you can’t get it back unless you can rescan the TV. 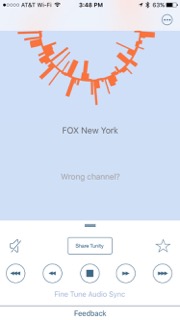 I mentioned earlier that you have to have location services turned on, and that’s because they want to know which feed to send to you. Tunities FAQs say they only support the network channels in New York, but if you look at the list of supported channels they have the major networks listed in PST (which I assume is Pacific Standard Time) and in New York. I’ve tried it on lots of channels and the major ones all worked. I asked Steve Goetz to check it out from Canada and he was able to see CNN when he tested it. Not sure if he tested more than that but it’s worth giving it a try even if you’re outside of the US.

I should mention that they have several of the ESPN and Fox Sports and NHL and MLB and NFL – clearly listening to sports is a big feature to Tunity.

Once you’re watching a show, you might notice a small lag in the audio. Sometimes it’s nearly spot on, sometimes it’s really way off. I’d scan again if you get a big enough lag to bug you. They have rewind buttons so you can relisten to something and then fast forward to get back to real time. They also have a Star on the same viewing screen, and I kind of hoped that would make a list of favorites so I could just go to ABC live without scanning the TV, but as far as I can see that star goes away as soon as you stop listening.

I don’t know what the business model is for Tunity, and I don’t know why they require a login. That gives me a bit of pause so make sure you’re ok with that. Tunity also will keep using location services when it’s in the background, which I don’t like at all. I have gotten into the habit of quitting the app actively as soon as I’m done with it to save battery and to reduce what information they’re getting about me.

But back to good news – the Apple version of Tunity is accessible (surprisingly, I didn’t have an Android device to check).  I checked every screen and all buttons were labeled properly and all text was read out accurately. I suppose one challenge would be on how to point it at the TV and get the image centered but I bet that can be figured out through some trial and error.

I also want to give a shoutout to Megan Marrone because I heard her talk about it on iOS Today. Very cool find and something I’ll definitely be using. My big use case is at the gym. You can listen to the TVs if you have an FM radio tuned to the right station, but who carries an FM radio any more? They also have jacks on the equipment and that works as long as you’re not moving around doing weights. With Tunity I can listen and keep moving.

Check out the free Tunity at tunity.com or look in your favorite app store.

2 thoughts on “Tunity to Hear Broadcast TV on Your Phone”