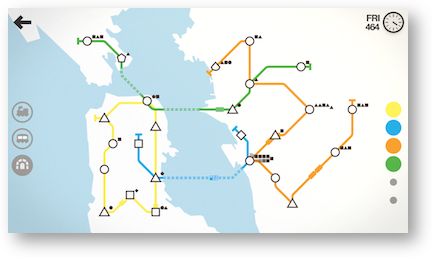 Hello Allison and NosillaCastaways, Allister here from New Zealand again with another review.

One of the reasons I like Apple products is because I like clean, simple design. There’s just something about oodles of white space, simple, bold colours, and crisp lines that appeals to my brain.

It should come as no surprise, then, that the famous London Underground map (https://en.wikipedia.org/wiki/Tube_map), designed by Harry Beck in 1931, tickles my fancy. When I was in London in 1999 I bought a t-shirt with the map on it and I have had my sister, who lives in the UK near London, send me new versions of this several times over the subsequent years as I wear them out.

But you could argue the map is a little too cluttered. What if it was simpler? What if you could start from scratch and build it up slowly? That could be kind of therapeutic, I think, don’t you? And wouldn’t it be cool if, while you were drawing the map, you could see little trains run along the lines? And see people getting on and off. That is the premise of the game Mini Metro which is now available on iOS. You can also get a version for your Mac as well as Windows, Linux, Android, and even in your browser.

The game starts you off in London and begins with three stations which you are free to connect with up to three separate train lines. The city view is, like the famous map, very much symbolic, so you don’t get much of sense of place except that the familiar snaking path of the Thames river crosses the map from left to right. Once you place a line on the map, simply by dragging between stations, a locomotive appears and begins to traverse the line back and forth, picking up passengers and delivering them to their destinations.

Each station has a simple geometric shape – a circle, square, or triangle, for example – and you can see which shape of station each passenger is destined for as they are represented by a symbol in that shape. It may be the line on which they board does not have that shape station, in which case you’ll need to ensure your lines are linked through at least one station so they can change lines to reach their destination. Where and how many times lines meet is an important strategy in your network.

A clock ticks over hours and days during which passengers continually appear and every so often a new station will wink into existence, meaning you must decide which line will service it. As necessary, you must use tunnels from a limited supply to cross the Thames. You also have a limited supply of locomotives, so you could use fewer lines and place multiple locomotives on any line, or use as many lines as possible with one locomotive each. At any time you can move a locomotive to another line and also reroute your lines as the layout of stations grows ever more complex.

A non-real-time clock ticks away game time in hours and days. The game week runs from Monday to Sunday and when the clock reaches the end of Sunday you are offered an additional locomotive and then a choice of additional assets. These can include an extra carriage, more tunnels, or sometimes a further locomotive. You will need to choose wisely depending on your network’s needs. A carriage attached to a locomotive means each trip can carry more passengers, but an extra locomotive means you can service more stations more quickly. More tunnels means you can perhaps serve both sides of the river more effectively.

You start with three lines available and after a while, the end of week options include the use of additional lines, but again, you must weigh extra lines against the number of locomotives you have. Do you need more, shorter lines, or fewer longer lines with more capacity in locomotives and carriages? 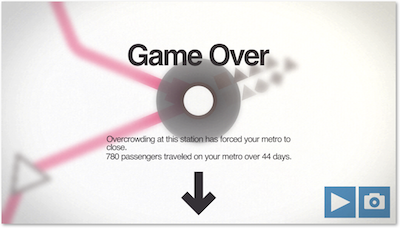 As the game continues adding more and more stations over time, it becomes increasingly difficult to keep up with passenger demand and you will find yourself deploying locomotives and carriages more tactically and rerouting lines as you begin to see where your choke points are. Eventually, however, your passengers will revolt. When a station becomes overcrowded with waiting passengers, their tempers begin to fray, the station symbol beings to pulse and a countdown begins. If you don’t sort your passengers out in time, then the station is closed and it’s game over!

If you managed to successfully move at least 100 passengers in London, you unlock the next city map – Paris. Here you have a more complex barrier in the form of the river Seine, which has islands in it, meaning your deployment of tunnels must be well thought out as more are required than simply crossing the Thames. Paris has a more dense network of small stations compared to London which changes the dynamic a little in the gameplay.

Complete the transfer of 100 passengers in Paris and you’ll unlock New York with the Hudson and East rivers to contend with. Conquer that and there are still more. Berlin, Melbourne, Hong Kong, Osaka, Saint Petersburg, Montreal, San Francisco, Sao Paulo, Cairo and, last and definitely not least, Auckland! The required number of passengers to unlock the next level increases as you move through these. Unlocking Auckland requires 500 successful passengers in Cairo. Meeting the goal in Montreal unlocks both San Francisco and Sao Paulo, so it’s not all hard work.

Each city has its unique attributes. In some you have bridges instead of tunnels to deal with waterways, although these operate identically. Osaka is my favourite so far because amongst the end-of-week bonuses you can opt for shinkansen trains which run a LOT faster than the regular ones. This again changes your strategising as these work best on a long line with few stops – great for moving a lot of passengers across your other shorter lines.

Another bonus type which shows up a few levels in is interchanges. Where you have lines meeting at a single station, you can place an interchange to speed up passenger handling. It is also worth noting that you can form any line into a loop which the trains will run around continuously instead of reversing direction at the ends of unlooped lines. Sometimes a loop with two locomotives running in opposite directions can be useful. How about a pair of shinkansens running around a loop in Osaka, serving radial branch lines?

I’ve been playing Mini Metro for about a week now and it’s one I keep coming back to. It’s not quite a game you can “dip into” when you have a few moments to spare. You’ll want to be concentrating the whole time from the start until you get overwhelmed and it takes about 10 to 20 minutes per level, although I guess if you’re a master network planner it could run longer! The gameplay is ideally suited to iOS as you drag out your lines, and drop locomotives and carriages. While I find the difficulty pacing of most games too much, I find Mini Metro to be just right. It’s always relaxing in the beginning, giving you time to study the “landscape” and consider what your strategy might be. Sometimes I find myself impatient for the next station to appear but before long I start wishing the passengers would decide where they want to be and just stay there!

There is a tutorial offered when you first launch Mini Metro, which shows you the basics, although there are a few tricks to learn along the way. I can only suggest you try experimenting with how to lay your lines early on so when it gets busy you’ll know what can be achieved and how.

Mini Metro by Dinosaur Polo Club is $4.99 for iOS, and $9.99 for macOS. I find the perfect device for this game is the iPad, but it is very playable on my iPhone.

If you’d like to hear more from me, you can find most of my stuff over at zkarj.me including the once-again-relaunched Sitting Duck Podcast (http://zkarj.me/sdp) for you music lovers, and my App Store offerings (http://zkarj.me/orange-moth) like the newly launched Night Clock (http://zkarj.me/night-clock) app and the Podfeet sticker pack and New Zealand Road Signs sticker pack.