After the big Apple announcement, I sang the virtues of the new MacBook Pro. However, there appears to be some confusion about all of the different models Apple introduced. Dave Hamilton expressed consternation on the Mac Geek Gab about how much harder Apple has made it to choose the right model.

I thought to myself, how hard could this be? I decided to make a simple diagram to help people choose. I did make the diagram, but it’s anything but simple!

Let’s start with what to call these different models. Apple calls the big MacBook Pro simply “MacBook Pro (15-inch, Late 2016)”. Ok, that’s easy enough. But the two 13″ models have a TON of differences between them which really muddies up the naming. Apple chose to name the two models:

While the name is clumsy, you can actually pick up a Late 2016 13″ MacBook Pro and tell them apart simply by counting the Thunderbolt 3 ports. But for our diagram we need to understand all of the differences.

In creating the diagram I realized I had to compare the type of function keys (physical vs Touch Bar with Touch ID), the display resolution, what kinds of processor chip sets they can have and the speeds within those families, whether they can have quad core or only dual core processors, the range of SSD storage, range of RAM, whether the graphics are integrated or discreet and how much memory is on those graphics cards, how many external displays of what resolution you can drive, how many microphones they come with and how much they weigh. Oh yeah, and about those Thunderbolt 3 ports. One model has two of them, two models have four, but one of the models with four Thunderbolt 3 ports has two full speed and two reduced bandwidth ports. And let’s not forget the price ranges.  If you try hard enough you can upgrade the bottom of the line 13″ until it costs more than the entry level 15″!

The only things that I could find in common with the three models was that they all come in silver or space grey and they all have a headphone jack. Thank goodness for that.

So after all that – here’s my “Simple Diagram to Help You Choose a Late 2016 MacBook Pro”. If you’d like a nice downloadable and (sort of) accessible PDF, click here: Late 2016 MacBooks Pro Compared.pdf

Click the image to get an enlarged version (but it doesn’t make the decision any easier!) 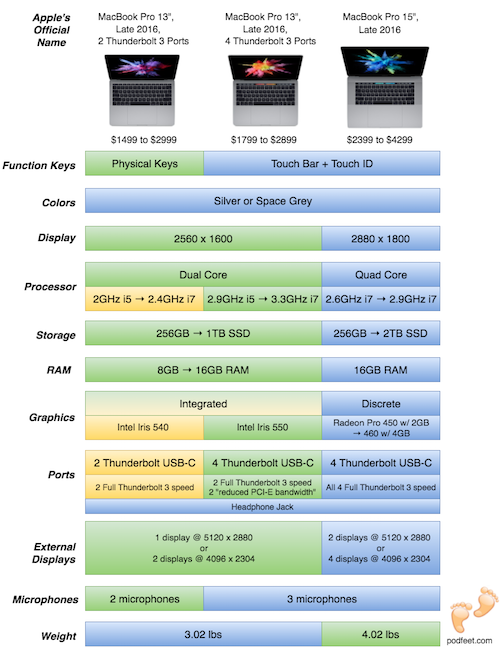 5 thoughts on “Do You Find the New Lineup of MacBooks Pro Confusing?”