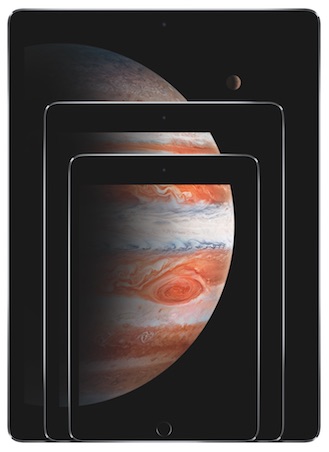 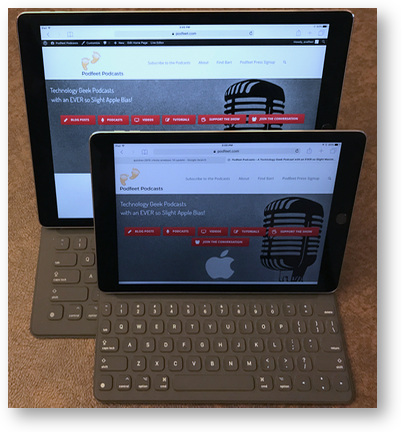 When last we left our heroine, she was patiently waiting for her 4th 12.9″ iPad Pro to be delivered. If you haven’t been following along with our home game, a problematic Smart Keyboard turned into 3 replacement keyboards and 3 replacement iPads. Apple gave me my money back on my original iPad (a year and 7 months into AppleCare) so that I could buy the new new version of the 12.9″ iPad Pro.

Apple likes to “surprise and delight”, and they did that when the iPad was delivered to the Apple Store an entire week early. I was super excited for two reasons. One was to see how much more awesome the new new iPad was like, but the other reason was a little more interesting.

To understand my perspective, let’s back up just a little bit. I bought my original 12.9″ iPad Pro right when they came out in November of 2015. When the 9.7″ model came out the following March, Steve decided that I needed that size too, so he got it for me for my birthday. An extravagant gesture to be sure, but I didn’t protest being spoiled. The 9.7″ iPad is better for carrying around outside the house (it’s my gym TV) but the 12.9″ was my favored device inside the house. Having both, it was hard to tell which one I preferred.Now let’s come back to today. During the two weeks I didn’t have the 12.9″, I realized that I really don’t like the 9.7″ format nearly as well. While technically it can do everything the big one can do, it just doesn’t feel right to me.

The most obvious difference in our day to day lives is in watching video podcasts. Steve and I watch the Daily Tech News Show every morning while we brush our teeth and get ready to go work out. We watch other shows like Cord Killers and The New Screensavers and Tech News Today and iOS Today as we have lunch and get ready for bed. Since this device is my TV, screen size matters.

The Magic Keyboard and the onscreen keyboard for the 9.7″ are really really teeny and cramped. A whole new experience in typos on the 9.7″.

I also noticed that when I was using the 9.7″, and it was time to relax on the couch watching TV, I started bringing my MacBook Pro down with me along with the iPad. I would usually start my TV time with the iPad, but eventually I would discard it in favor of the MacBook Pro.

The same thing happened when sipping my coffee in bed in the mornings. The 9.7″ iPad would be used for the cursory check of social media but as soon as I wanted to provide any contributions, I turned to the Mac. When I had the 12.9″ I had always used the iPad as my morning coffee computer.

When I got the 12.9″ back, I started noticing that my Mac was more often left on my desk and the iPad was what I reached for. I’ve mentioned quite a few times that I’m a huge fan of the 3rd party keyboard, MyScript Stylus. This keyboard allows you to write with your finger or a stylus (but the Apple Pencil is best) and it converts your scribbly handwriting into typed text as you write. It’s positively magical. I hardly used MyScript Stylus on the small iPad and yet it was what I immediately started to use again when the big iPad came back.

I realized that the form factor of the giant iPad is dramatically better for me as a lean back device than the smaller iPad or even the MacBook Pro. The smaller iPad feels too cramped to do any significant work, and when I used the MacBook Pro in my lap, it was always sliding towards me, which was annoying. The big iPad isn’t cramped and it doesn’t slide around because the felt on the back of the Smart Keyboard when it’s flipped around in back. It’s so delightful to scribble chats to people while watching TV.

You may have been expecting a glowing review of how much better the new new 12.9″ iPad Pro is than the original model. It’s time I confess that I can barely tell the difference. I know I should be dancing around the room talking about color gamut and 120 frames per second and how it’s transformed my life, but to be honest the only thing I’ve noticed is that it’s brighter than the old one. Nothing seems faster or magical about it.

I know everyone isn’t like me, so I’m not saying the 12.9″ iPad Pro is the one you should like best but I was really surprised by how much I missed that size when it was gone. The smaller iPads might be great for you, but for me, it’s the Big Girl iPad Pro all the way.