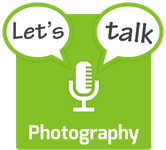 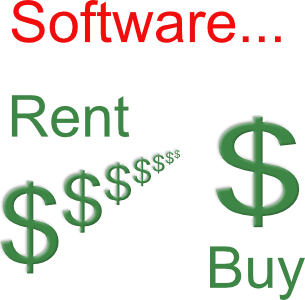 One of my favorite podcasts is Bart Busschots’s Let’s Talk Photography show. He often has a panel of guests on to talk about photography techniques, but he also has shows that are just Bart teaching on a subject or simply musing. I like the panel episodes and I love the Bart-only shows.

In Episode 45 entitled “Thoughts on Software” he walks through some thoughts on choosing photo image editing software. He doesn’t compare features so his advice could really apply to any software you use, not just photography software. I want you to go listen to his show (at lets-talk.ie/…) but I also want to talk about what he said and perhaps provide another viewpoint. Ideally you’ll stop listening/reading me now and go listen to Bart and come back. Don’t worry, I’ll wait.

====== Sings Jeopardy theme song =======His first point is that no one can tell you what software is right for you, and I couldn’t agree more. I can’t stand it when I hear people review products and declare them good or bad, wrong or right. The worst right now are people reviewing the HomePod by saying, “I already have speakers.” That’s not at all relevant to whether HomePod could be good for someone else!

Anyway, I’ve managed to digress already. Bart then discusses one of his favorite topics, “follow the money”. He goes through how he believes that the subscription model gives software development companies a sustainable business that can support good software development.

His point was that software companies have trouble making profits that will sustain a development staff during the droughts between big upgrades. He also believes that only getting revenue after big upgrades encourages companies to add fancy features that maybe users don’t need or even want.

That sounds like a sane argument, but he used Adobe as an example, specifically their move to the Adobe Creative Cloud subscription model. As soon as I heard him talk about Adobe and trouble making profit in the same sentence I started wondering whether that was true, or whether he assumed it was true.

I decided to do some digging. Since Adobe is a publicly-available company, we can actually see what their profit margin has been as a function of time.

I found a resource called stock-analysis-on.net/… where I could specify the date range for a particular company and it also allowed me to download an Excel file to make my own graphs. What could be more fun than that???

I asked for financial data for Adobe from 2011 to 2017. The data was fascinating. The short story is that in May of 2013, when Adobe first announced its subscription-only service, they had a net profit margin of 13%. Their profits had been in a slide for six months leading up to that announcement, but after the announcement the net profits continued to plummet. In fact, they dropped to 6% by August of 2014.

They did continue to recover, returning to 2011 profit margins in December 2016. The curve has continued up till today when they’re at 22%.

I put a screenshot of my Excel graph in the show notes with a link to a big version of the screenshot and I’ve even uploaded the Excel file in case you want to play with it. (Download Excel file here.) 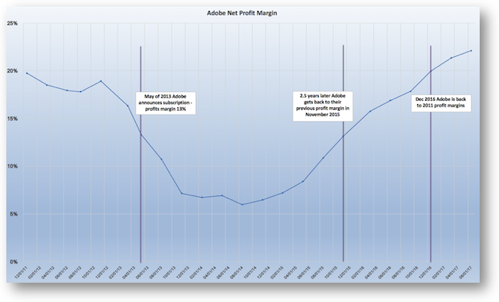 I was talking to Steve about the giant two and a half year dip in profit margin Adobe experience directly after they announced the subscription model. He suggested that it took that long for people to finally submit to Adobe’s terms and agree to paying to rent their software. During this time, I remember Adobe coming out with a lot of new features (even though Bart says that’s not what should happen). I think those new features did convince people to abandon the software they’d paid so much for and sign up for the subscription model. There seems to have been a period of denial followed by acceptance. Until recent announcements from Serif Labs about Affinity Photo, people have seemed to feel that they’re getting good value out of paying $120 per year for Photoshop and Lightroom.

Let’s look at the other side of this equation. In 1987 a little company called Serif Labs was created. Over time they’ve been working on products to compete with Adobe. In 2014 Serif came out with Affinity Designer for the Mac (they’d had it for Windows for a while). In 2016 they came out with Affinity Photo first for the Mac and then later for Windows. In 2017 they came out with Affinity Photo for iPad. They’ve got teaser videos out for their digital asset manager which will compete with Adobe Lightroom and be available on the iPad. Adobe does not have Photoshop for iPad or even a full version of Lightroom for iPad. They have a limited version of Lightroom only.

Affinity has chosen a different business model than Adobe. They charge once for their software, not subscription payments. And Adobe users are flocking to Affinity tools. I wish I had pure numbers to back up this statement, but Serif is a privately-held British company so they don’t report on profits or any other metrics that I can find.

What I can tell you is that the community of rabid users is growing at a brisk pace. One Affinity Facebook group of which I’m a member already has over 4000 members. 191,825 people have liked the official Affinity page in Facebook. Based on that I think it’s an easy stretch to estimate that at least a hundred thousand of people have fled the Adobe subscription model and moved over to the Affinity products. The testimonials from real photographers and graphic designers doing crazy amazing work in Affinity Photo and Affinity Designer are amazing.

When Serif Labs comes out with their Lightroom competitor, I predict that a much greater percentage of people will jump ship. It’s not just that the Affinity line of products are a buy once model, it’s that they cost far less than Adobe ever charged for their products. I know at one time Photoshop was $600, I think it was more in the $300 rage towards the end, but Affinity Photos is only $50 and Affinity Designer is also $50. That’s the cost of 5 months of Adobe’s Photoshop and Lightroom bundle.

Affinity has a lean, talented staff. I found an article dated in 2014 when Affinity Designer came out for Mac – they only had 30 developers on staff. As of the last time the Wikipedia page was updated for Serif, their total headcount was 190. Adobe has 15,70 employees. Perhaps Adobe’s profit problems stem more from a bloated staff than an unsustainable business model.

I want to take this discussion a bit further. Bart argued that without a subscription model, companies are essentially forced into coming out with big releases, adding new features people don’t need or want. I’m not sure a subscription model stops that behavior.

I used Office 2011 at home just about as long as I could. It will stop working with High Sierra, but I jumped over to Office 365 a few months back. I absolutely hate the new version of Excel in 365. I found it incredibly tedious to create the chart I made for this post. Just trying to find the simple things I wanted to do, like change the font size on the axes was a long process. I could, of course find silly things like how to fill the font with a gradient but I couldn’t find the darn bold button. I’m now paying $100 per year for a product that is much worse than what I owned before. Oh, and Excel in Office 365 is way way slower than Office 2011. So there’s that. A subscription service didn’t save me from bloatware.

To be honest, I use Google Sheets far more often than I use Excel because it’s so dreadful and because it’s harder for me to share files with Excel 365. Micrsoft has sucked all of the joy out of Excel for me.

I predict that more companies will come out of the woodwork with models like Serif’s Affinity Photo and Designer to compete with the subscription services of the big guys. I predict that if in two years, I pull the Adobe profit margins, that curve will have started downwards again because of the subscription model.

As Bart said at the very beginning of his show, no one can tell you what software is right for you. We can both give you something to think about when choosing your software. Personally, I’m a Serif Labs fangirl all the way. Now if you cheated and read or listened without listening to Let’s Talk Photography for June 2017, go listen to it right now!