While Steve and I were on vacation, something very curious happened. As you know we’ve been getting more and more into Home Automation, adding connected devices with reckless abandon lately. One of our early devices was our Ring Video Doorbell.

When we’re away, we find it comforting to watch the notifications when our Ring doorbell gets triggered. Sometimes it’s a big truck going by but usually it’s something useful like a package getting delivered. When I see a package on the doorstep, I sweet talk my lovely neighbor Naila into grabbing it for me before someone pinches it. She really loves helping me like this, I’m sure.

When we were in Hawaii last week, I was expecting the delivery of yet another package. Coincidentally it was yet another Ring device. We not only have the doorbell, we’ve also got the Floodlight cam that gives us a great, wide-angle view of the backyard. It’s fantastic because it not only works in daylight, it’s infrared, and you can turn on the floodlights. It has a mic and speakers so you can yell at someone sneaking around in the backyard, but there’s even a siren to scare them off if you so choose. It’s motion-triggered and for another $30/year we can store the video online for later viewing.

But that wasn’t enough. For Steve’s birthday he’d asked for a third device. Along the side of our house, we have a gate to the backyard, and it’s nice to have light there, so why not a floodlight that’s motion-triggered there too? But we don’t have a power source there, so Steve asked for the Ring Spotlight Cam Solar. It is battery powered but coupled with the solar panel he’ll never have to charge it. The Spotlight Cam will light Steve’s path when he takes the trash out at night. It will also give him a nice view of our trash cans, along with the gate, and give him the ability to holler at people in the side yard before they’re visible in the backyard.

I said that something interesting happened while we were gone. Our Ring devices told us that our UPS had died. It’s not quite as tricky as that sounds, but it was our early indicator.

When I knew the third Ring device was going to be delivered, I checked the front doorbell’s live view to see if it was there. Oddly the Ring Video Doorbell did not respond. Steve said he’d noticed that the day before but figured it was some sort of glitch we’d have to fix when we got home. Remember, Everything is Fiddly!

Even though we had a beautiful bay out in front of us swarming with turtles and Forbes to play with, I couldn’t resist trying to figure out what was wrong. We check our Wyzcams, which are on the IoT network, and they were all working fine. The Ring doorbell is on our good network supplied by our Netgear Nighthawk router. I’m not sure exactly why it’s not on the IoT network. If the Wyzcams were up, and the Ring was down, we needed to test another device on the good network to verify it was down.

Our first thought was to check our D-Link OMNA webcam that’s on the good network, because it points at a clock with a pendulum so you can tell if it’s live. But then we remembered that we gave that camera to our son Kyle and his fiancé Nikki so they could watch their new puppy Charlie while they were at work.

I was unable to access our PLEX server, which is on our Mac mini on the good network. That wasn’t a great test though because our PLEX server has a real attitude about making itself available to the outside network. Sometimes it’s just not in the mood!

Finally, we tried seeing if we could toggle one of our Hue lights on and off, and those too were not responding. Hue is HomeKit-compatible and is on the good network. So that cinched it, the good network was down.

I texted our house sitter Brandy (who must enjoy the heck out of our cameras watching things and us flicking lights on and off) to see if something odd was going on.

She said yes, there was a beeping noise in the room where she was sleeping. She stays in Lindsay’s old room which is where our Netgear router lives. But I couldn’t think that it would be making a beeping sound and a blinking blue light. The Netgear Nighthawk sits on top of two Drobos, which have lots of lights, but they show the status of their drives. It could have been one of them that was failing but I didn’t think it would beep. There’s also the Hue Hub with blue lights but it also doesn’t make sense as the beeping culprit. 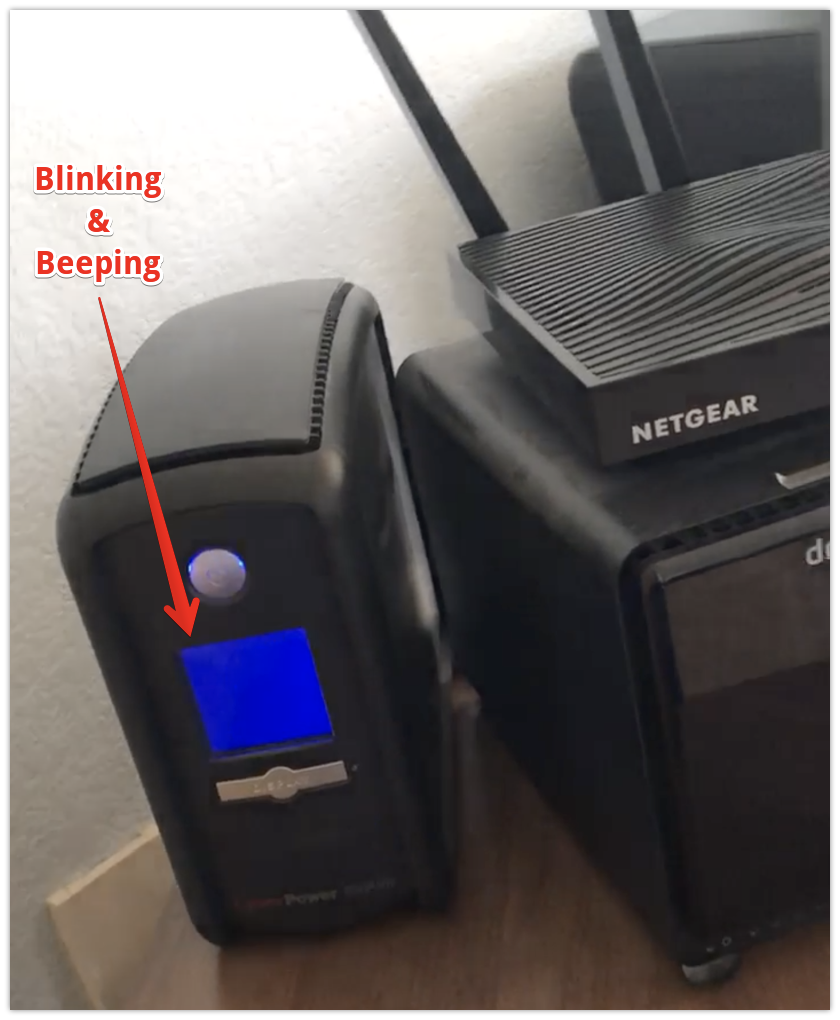 And then I remembered the Uninterruptible Power Supply, into which the two Drobos, the router, a switch, the printer, and the Hue hub are all plugged. I asked her if she could text me a picture of the device that was blinking. She did one better, she sent me a video and sure enough, it was our UPS. Because she had video and moved around a bit, I was able to see that the Drobos were both off as well.

She did a great job of testing different solutions, including unplugging everything and just plugging in one thing at a time. At one point she said the printer came on when she turned on the UPS, but that didn’t make sense so I dismissed it as a red herring. We decided to have her plug the router into the wall, and unplug everything else and shut off the beeping UPS and take care of it when we got home. I kept saying to Lindsay that the UPS had one job…to be uninterruptible.

From a bit of the Googles, it appears that the CyberPower AVR850 UPS might have dead batteries, which would explain the blinking and hollering it was doing. UPSs generally have two sets of plugs. One side provides battery during an outage along with surge protection. The other side is purely for surge protection with no battery backup. I plugged a lamp into the surge-only side and it worked just fine, but when I plugged it into the battery side the lamp didn’t work. Remember when Brandy said the printer came on and I said that didn’t make sense? Well not it does make sense, it must have been on the surge-only side.

We had considered replacing the batteries in the UPS, but then I had a flash of memory. I realized that we didn’t buy this UPS new, we bought it from Tim Verpoorten’s estate. That means it’s been working away at our house for 5 full years, and who knows how long when it was with Tim. I also thought about the diagnostics with the lamp and the printer.

If one or more of the batteries were dead, why didn’t the UPS simply pass house power through to the devices on that side? We know it was getting house power because the surge-only side was working, as demonstrated with the printer and lamp. The answer had to be that the controller that figures out which kind of power to send had actually failed. That theory would be in concert with the fact that the display was just blinking blue, not displaying information about the state of the batteries like it was supposed to.

We decided it was time to replace the UPS. The original was a CyberPower 850AWR, and since it had done a pretty good job for a long time, we went with CyberPower again. The new version of the 850VA UPS from CyberPower is only $106 on Amazon. But hey, the 1500VA version was only $145 so rather than do any math to see what we actually need, we went for the big girl UPS!

We accidentally got one great new feature with this new UPS. Our 2-year-old grandson Forbes is clearly going to be an engineer based on his interesting in plugging and unplugging things (he’s figured out coax connectors) and turning things on and off. More than once he has waddled over to the original UPS and promptly pushed the power button, causing a hard shutdown of both Drobos and our router. I’ll always wonder whether that had anything to do with it failing.

But the new and improved version of the CyberPower UPS is that you have to hold the power down for three seconds before it turns off! I wonder how soon Forbes will figure that out?

The bottom line is that our doorbell told us that our UPS had died. So that’s cool, right?