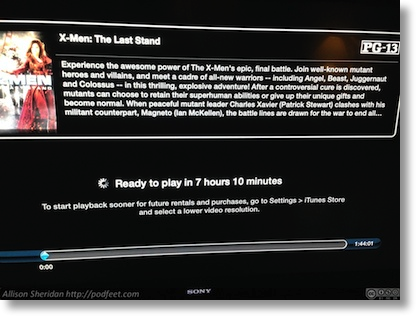 Last week I whined yet again about my AppleTV woes, where every time we try to start playing a rented movie, it tells me it will be hours till the movie is ready to play. Several people over the last few months have suggested that I call Apple but I poopoohed that idea. I did write to customer support on iTunes but while they happily kept refunding me my rentals, they didn’t know a darn thing about why this kept happening.

This week Lynda wrote in and really pushed me to give tech support a call. I did my usual arguments about how it’s not under AppleCare so why would they help me, but then I realized I had nothing to lose by trying. Heck, I’d tried everything else, right?

Whenever I call tech support I spend some time up front trying to convince the person on the phone to go quickly with me and skip all the easy steps. After my long diatribe explaining how my AppleTV insisted it would take hours to play my rented movie, the woman from Apple tech support said, “yeah, some AppleTVs do that.” I couldn’t believe it! She didn’t talk to me like someone reading from a script, she used very natural language which was odd and yet enjoyable of course. Then she said that she’s answered a ton of calls about this and one thing has worked for all but 2 people total out of everyone she’s helped.

She said to hold down the menu button and the down arrow at the same time for 6 seconds and release. This causes a restart of the AppleTV, but not the same kind of restart as the settings software restart. I explained that I’d tried the entirely hard reset and unplugging of the device but she said this is different.

Steve and I went hunting to try and find a movie at $3.99 or less so we could use up those 3 movie credits Apple gave me for not being able to watch movies. We had already seen X-Men the Last Stand but didn’t mind seeing it again for free, so we rented it. And…the AppleTV suggested we take a break for 7 hours and 10 minutes. Yay, at least it failed when I needed it to.

I held down the menu and down arrow for 6 seconds, let go, the AppleTV restarted in just a few seconds, and I was brought right back to the movie where I hit play – and it WORKED! I couldn’t believe it. Now it pains me to admit this but actually just a week or so before, SwitcherMark did send me the remote control trick Apple told me about but he didn’t really put it in context to tell me what to expect so I ignored him. He and I have an “interesting” relationship anyway, so ignoring him is one of my enjoyments in life. But I do have to admit he told me first. One more thing – the next time we tried to rent a movie (this time X-Men First Class also for $3.99) we never got the delay problem, nor did it come up on the third movie we rented this weekend, a new movie with Nicolas Cage called Joe, which is oddly priced at $0.99 right now!

So for anyone else looking for the fix, down arrow and menu button for 6 seconds, release, wait for restart and enjoy your movie.