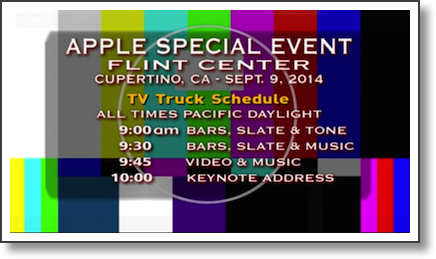 First there was streaming of the Apple event, which will forever go down in history as the Truck Slide event. I defended them for the disaster saying that just too many people were trying to watch, but then later found out it was a mistake they made in their coding of the website that caused the problems. I had trouble defending the Chinese translation overlay, that was just a n00b mistake that was an utter embarrassment made more shocking by how long it lasted – I think it was a half hour, wasn’t it?

Then there was the disaster of trying to order phones. Sure 6M people succeeded at pre-ordering but one wonders how many tried and failed to get in or lost patience? Again I apologized for Apple – it was just a sign of how hard their servers were getting hammered. Odd that for 2 straight hours their site never resolved at my house though. Odd that AT&T’s site was actually functioning the same time. But still, I defended them.

Now photos and videos of iPhone 6 Pluses bending under pressure are surfacing. It even made the national news. I laughed it off and talked of how much I’m looking forward to how Saturday Night Live will spoof this: “Look! I put it in a vice and bent it with a sledge hammer and it actually bends! This is a terrible design!” I pointed out that when I put my glasses in my pocket and sit down, they bend and break too. What do they expect from Apple? To defy the laws of materials science? Sheesh, it even made the national news when there are huge crises in the world to talk about.

But then my apologies and explanations ran out. They pushed out iOS 8.0.1…and iPhone 6/6 Pluses lost cellular connectivity and their TouchIDs failed. Seriously? Your flagship phones. The ones you just sold 10 million of over the weekend. You didn’t TEST this update on them? Really? Somehow you found the time to test on iPhone 5s and below, but you forgot about the new ones? This botched update was so bad they had to pull the update back. I don’t think they’ve ever had to do that as far back as I can remember.

This is an inexcusable failure on Apple’s part and I’m done apologizing for them.

And for a more forgiving point of view (thanks to Louis Trapani for sending):

12 thoughts on “Weary of Trying to Defend Apple”