Steve Davidson has our Dumb Question for today. Here’s what he wrote:

A few years ago, when I bought my iPad 2, those of us in the US had to decide at the time of purchase whether we wanted a GSM iPad 2 (to use on AT&T’s network) or a CDMA iPad 2 (for Verizon’s network) — or get a Wi-Fi-only version (which I didn’t want). Apple built two internally-different iPad 2’s. Once you picked one flavor of iPad 2 or the other, and you were stuck with that carrier (or it’s lesser Sprint or T-Mobile radio twin) for the life of the device.

My impression from reading the specs. on newer iDevices (iPhones and iPads) is that Apple is now making then with all/both carriers’ radio types. It looks like the hardware is capable of either (no internal differences), so you aren’t locked into one carrier or another (unless you buy a contract that way). The Dumb Question is this: “Is that right? Is this Utopian future really here today?”

If so, that gives the consumer a lot of freedom. For example, when when the new iPads come out, I could just buy one and decide later which carrier I would prefer — or get a monthly plan from the start, and change my carrier later. The various carriers would have to compete to keep my business. Or I could get my wife an off-contract iPhone 6 Plus, and pick the carrier that gives us the best voice and data plans.

Oh, She Who Answers Dumb Questions, please enlighten me!

I’m not an expert on this so I had to do some actual reading! I found on Apple’s website a description of the different bands supported. They show that if you get the phone from Verizon, you get CDMA as well as GSM, while if you get the AT&T / T-Mobile version you only get the GSM bands (along with some other bands, but not CDMA). It seems to me that the Verizon model would be the most flexible based on this information. I put a screenshot in the shownotes to the Apple page I’m citing. 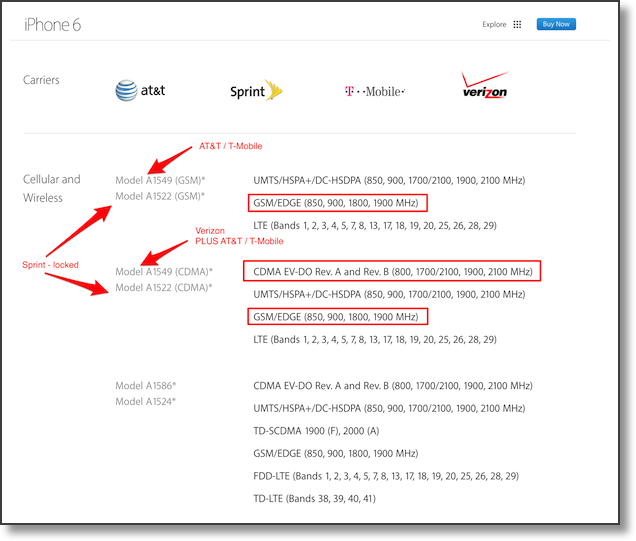 I also noted on the screenshot that there are two models in there that are evidently locked to Sprint. I got that information from an incredibly detailed site on the subject called TechWalls.com. In the early description Tuan Do describes the differences between the models and the advantages of each. I’m not going to read it to you because I think if you along with Steve are interested in this you’d be better served going to the link in the shownotes to Tuan Do’s site:

It’s an interesting read along with the comments section where people pose these obscure scenarios of where they live, where they will be visiting and which phone to buy and Tuan answers them definitively. He appears to know what he’s talking about!

Now I wouldn’t normally cite Leo LaPorte as a source, but he said something on TWiT that would be in concert with the tech specs. He said he pulled his AT&T SIM out of another phone and plopped it into his Verizon iPhone 6 and it worked. Made phone calls, did data. Again, not a great source of facts but he claimed to have done it.

After Steve read the information I’ve just described to you he wrote back:

The key take-away of the article is that the iPhone 6 A1549 (CDMA) and the iPhone 6 Plus A1522 (CDMA) contain the superset of radios for US carrier access, enabling them to work on both the Verizon and AT&T networks (among others). The article describes this as the Verizon version, and that “As all Verizon iPhones are factory unlocked, it can work on most CDMA and GSM networks in the world” (consistent with the list of radio channel compatibility).

I think we have our answer. Steve – thanks for the dumb question and forcing me to learn a bit more about this. Now I’ll just sit in the corner with my AT&T phone…

4 thoughts on “Dumb Question Corner – Can AT&T and Verizon Phones Work on Each Others Network?”