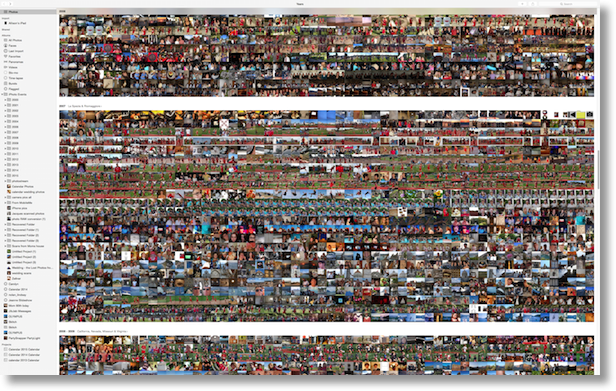 I’m into week two with the new Photos app and I’m still really liking it. My entire library did finally sync up from my Mac to iCloud Photo Library so I could see all 58,820 of my photos at icloud.com. They also all came back down in optimized versions on my iPhone. Oddly though, while earlier in the week they were methodically plopping into my iPad, holes in the library started to develop. I’d have 4 photos in a row, then 20 blanks, then another couple. Some years were missing 80% of the photos.

Traditionally I spend a LOT of time fooling around trying to diagnose things on my own and noodling with friends on Twitter and G+ about it first but I decided to give AppleCare a whirl. I always buy AppleCare on my portable products but I usually only use it as a hardware warranty. I figured why not get more of my money’s worth by making THEM figure this one out?

Alice took he call to start with and I explained that I was REALLY trying to exercise the limits of Photos by cramming 58K of them in there. At first she sounded like our kind of people, appreciating what I was trying to do but after a few minutes of searching for a solution she said, “it seems like you’re trying to do too much.” I suggested that she was mistaken since it works on the iPhone and on the Mac and in iCloud.com and by the way I’m paying $10/month for 500GB of storage for these photos so they’d better make it work. She said that she could do some more research and even bump me up to a senior advisor. I suggested that was a very good idea.

Gerald got on the line and he was DEFINITELY our people. He loved what I was doing and noodles back and forth with me on how to proceed. His first idea was to have me quit Photos on the iPad and turn of iCloud Photo Library. It brought up an alarming message about deleting all my photos and firebombing a nursery school (at least it sounded that alarming to me) but in careful reading it was asking me if I wanted to remove the photos just from this device or have them all downloaded. We chose to have them erased. After a bit of churning it finished…but the photos were still there! We tried every off switch available including turning off Photostreams and those photos simply would not go away.

It was at this point that Gerald and I realized I’d be doing a complete wipe to factory settings on my iPad that day. He did teach me something cool about running backups in iTunes. I thought you had to either have iCloud backup OR local backups but I’d been misinterpreting the choices in iTunes. Once you plug in your device and choose it in iTunes you can see the Backups section. On the left you can choose to automatically back up to iCloud OR this computer. I thought you had to change it to “this computer” in order to manually back up locally, but Gerald explained you can keep it backing up to the cloud, but still force a manual back up. Maybe you ALL knew that, but I didn’t!

Gerald suggested two possible paths AFTER I made sure there was a local and iCloud backup. He said I could restore from the backup and then wait and see if my photos all came in, but there was a reasonable chance that whatever was boogering it up was in the backup file and I might end up right where I started. The other option is to turn on iCloud Photo Library first, and see if the photos come in properly. That meant I’d have to set the iPad up from scratch after that. I chose door number 2 on this because I think it’s fun to set up device from scratch because it forces you to reevaluate what you REALLY need. Sort of like cleaning out your closet – take everything out and only put back what you’ll really wear and you do a much better job than if you try to take out what you don’t wear.

I’m happy to say that after starting from a clean iPad, all 58,820 of my photos showed up optimized for iPad. I think this is so amazing. I love that I can now see every photo I’ve ever taken on my Mac, my iPhone, my iPad and even via a web browser on any machine. I can’t say this was the smoothest user experience to get the last device working, but it’s good to know that even if you’re a crazy photographer like me, you CAN get all of your photos into iCloud Photo Library and have them all available on all of your devices!