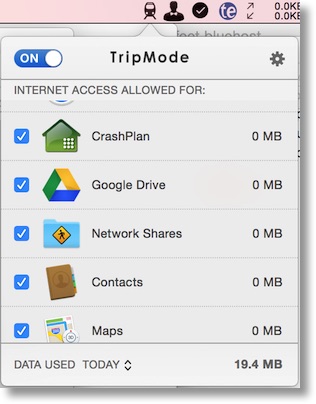 When I write up a blog post or talk about something on the podcast, I like to wait until I have a problem to be solved, a potential solution, and an assessment of how well that solution worked out to solve the real problem. This is not going to be one of those nice little wrapped up in a bow stories.

Instead, I’m going to talk abut something I’ve covered before but for which I have yet to find an answer. I pay a fortune for a Verizon Mifi just so that I have secure, fast Internet when I travel. By a fortune, I mean $56 a month for 6GB! The tragedy of the story is that I hardly ever need it, but when I DO need it I somehow chew up all of my data in the first few days of a trip so it becomes useless to me. So here I am pouring $56/month down the drain when I don’t need it and then when I DO need it, it runs out almost immediately.

Nearly 2 years ago I had Katie Floyd come on the show to try and help me figure out how to control my data usage on travel, and I even made a checklist to follow to make sure it never happened again. A lot has changed in the last two years, we’ve only become more and more reliant on cloud services, in fact so many new cloud services that it’s hard to keep track. iCloud Photo Library, Google Drive, Microsoft One Drive, Dropbox…the list goes on and on. My checklist is limited to what we knew 2 years ago.

On our recent vacation, I took my MacBook while Steve and Kyle both had their MacBook Airs. I also had my iPad which shares the data plan with the Mifi. The good news was that our trip straddled our Verizon data plan renewal date, and I hadn’t used any data to speak of in the month, so we should have had GOBS of data to spare, because we had two 6GB months for a 7 day trip. You would have thought that 12GB should be enough for 3 people for 7 days, but you’d be wrong.

In the first 3 days of the trip I got the 50%, 75% and 90% warnings from Verizon on the first 6GBs. Luckily it flipped over to the next month so instead of figuring out what was wrong, I just made frowny faces at the boys and told them they’d better not be watching videos or anything dumb like that. Steve did notice that a system software update had run so we all turned that off. It wasn’t on our checklist but it sure is now.

The new month started on the 29th and in less than 3 days we’d eaten up our data again. I got online with Verizon and tried to convince them they were wrong but they were unwavering. I paid for an extra couple of gigs, which we chewed up in about a half a day. Overall, in 3 days we used 9.6GB! I was beside myself. We ended up having to revert to the HORRIBLE hotel Internets for the 7th day. Not a bad deal for free Internet but knowing I had just used up more than a hundred dollars in FAST Internet really steamed me. 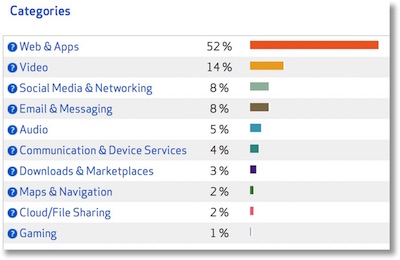 When I got back I decided to go back to Verizon’s site to see what I could learn. They have really has improved their tools to track the root cause, and I was able to determine that the iPad wasn’t the culprit. It only ate 500MB, while the Mifi took the bulk at 9.1GB. That made sense since I didn’t do too much on it and ensured that video podcasts were set to only download on wifi. So where did 9.1GB come from in 3 days?

Verizon allows you to drill down another step. According to their graphs which I put in the shownotes, 52% of the 9.1GB was on “Web & Apps”, 14% on Video and 8% on Social Media/Networking and another 8% on Email Messaging. Now we’re getting somewhere. They let me drill down another level into Web & Apps but it wasn’t as helpful as I’d hoped. It said that 38% was Portals & Search. So 38% of 52% of 9.1GB, otherwise known as 1.8GB was from Portals & Search. Well what the heck is a Portal these days? Is Facebook a portal? That would make sense, but remember they had another category for Social Media, so maybe not. Would Google search use up 1.8GB? How could that be? The “data” wasn’t very helpful.

I posted about this in our Google Plus community over at podfeet.com/googleplus and got great suggestions from George from Tulsa, Jim Sewell and Colin Croft. Jim told me that David Sparks had recommended a little menubar app that helps you track and limit your data usage by application called TripMode. This sounded like exactly what I was looking for.

TripMode is $8 per machine from tripmode.ch and within minutes I knew this was the app designed specifically for the problem I was trying to solve. TripMode is a menubar app that stops ALL network traffic until you specifically give each application access. As applications try to access the network, the TripMode icon blinks red, alerting you so you can decide whether it’s worthy. Better yet, as you allow applications access to the network, TripMode measures the network traffic by application in real time. With Verizon’s tools I only know I’m in trouble when half of my data is already gone! With TripMode I’ll be able to see it creeping up and do something about it. This means that if, as George from Tulsa suspects, Facebook on Safari is eating all my data, I’ll be able to keep an eye on Safari while I’m posting photos and liking cat videos and KNOW that it’s causing my big data usage.

TripMode has an on/off switch and when on, is also collecting cumulative network traffic statistics. You can see usage for the day, the month and the current session which is all data since the last time you toggled it off and back on. This will be perfect for my next trip. I didn’t want to wait until then though so I ran some experiments.

I ran a ton of tests on my MacBook running one app at a time doing very little on my device and found nothing conclusive to explain my high data usage on the trip. I ran one app at a time, I documented everything I did, but couldn’t find the culprit. Of course I could throw Steve and Kyle under the bus here and blame them for the high data usage, but seriously, who do YOU think is probably causing the problem?

I chatted with Dave Hamilton of the Mac Geek Gab before my last trip and he said that he uses Little Snitch to do this, but the pricing for my specific need didn’t seem worth it to me. Little Snitch is very capable for other things but at $35 for a single license or $130 for 5 seats, it was too rich for my blood. TripMode is a mere $7 per machine, so for the three of us next time I’d be out $21. I wish they had a Mac App Store version of course, but TripMode includes a kernel extension to do its magic and that’s not allowed in the Store.

Now it did give me a bit of pause to install a kernel extension, especially one from a .ch domain, but it was recommended by Macworld and also TidBITS who included the following statement;

You might think TripMode would require a low-level kernel extension to work its magic, and you’d be right. Despite that, it’s an entirely self-contained app in the Applications folder, with its kernel extension hidden inside. So when you turn TripMode off, or uninstall it by dragging it to the trash, you don’t have to worry about a kernel extension remaining on your system and potentially causing instability.

I bought TripMode for my Mac and Steve’s and I’m armed and ready for next time to try and finally crack the code on this mystery. If any of my kids are on the next trip with me I’ll buy them TripMode too and we WILL figure this one out. If you’ve read or listened to this and you know the answer, throw me a bone will you and let me know what we’re doing to eat up all this data???

2 thoughts on “Can TripMode Demystify My Massive Network Data Usage?”