Recording a podcast isn’t really similar to recording music but for years I’ve used GarageBand to do the podcast. For example, GarageBand defaults to having the metronome on, keeping track of beats per minute, and even having reverb on voice tracks. MANY years ago Will, a good friend of the show, created a little script for me that turned all that stuff off that I was using up until I stopped using GarageBand. In another irritating example, GarageBand introduced Flex Time editing which allows the audio editor to change the pitch of a vocalist’s recording in case they were off key. I never ever wanted that, but I would accidentally trigger it during editing and it would take forever to analyze the track to apply the effect and then let me undo the effect.

Garageband 6.0.5 was my tool of choice for all this time, but it was deprecated a few years ago and replaced by GarageBand 10 which is so complicated and filled with non-podcasting things that I’ve never been able to get it to work for me. Much like the way I dropped The Levelator in favor of Auphonic before it stopped working, I decided it was time for me to make a change away from GarageBand before Apple stopped it from working in a future rev of the OS. I like to be in control of the timing rather than suddenly being surprised.

As I started on this quest, I thought about what is important to me in a recording application:

GarageBand 6 gave me all of these things as well as some podcast tools that I didn’t use, like tools to make an enhanced podcast where you can jump to bookmarks within a show with different album artwork. It’s not that I didn’t think those were swell, it’s just that it was WAY too much work.

I remembered ages ago playing around briefly with a tool called Amadeus Pro so I thought I’d take a fresh look at it to see if it met my needs. I discovered a detailed 88-page manual online and I did the weirdest thing – I read it cover to cover! I got a little nervous when I saw the date on the manual was 2011, and even more nervous I went over to the discussion forums at http://www.hairersoft.com/forum/ and saw the sticky post on top dated 2009, but when I dug into the forum found the developer actively engaged in helping out his users.

The developer also offered a free trial so armed with the manual I was able to test thoroughly before committing. I applaud the developer for letting me try it out and then buy in the Mac App Store (or directly from him). 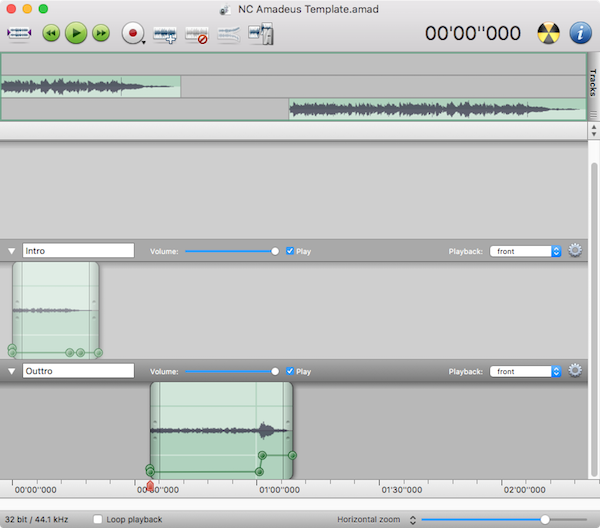 The Amadeus Pro interface at its basic level is really easy to understand. It’s got the traditional play, pause, rewind, fast forward and record buttons. Right after that are four really easy to understand buttons to add a track, delete a track, split a stereo track into two mono tracks and split track. Having these buttons right up front is a huge upgrade from GarageBand for me. I often have a stereo recording from Chit Chat Across the Pond that I’d like to split into two mono tracks to do things like remove a phone ringing on one side, or some other problem in the audio.

When you start adding a lot of tracks, it really helps to be able to name them. Amadeus Pro has a field right on the track that says “Track Name” inviting you to rename them. I like to mute the music track while I’m laying my own audio track in, and Amadeus Pro has a check box for “Play” right on each track that you can toggle on and off. You also get a volume slider for each track right in the same area. If you get a lot of tracks set up, you can easily collapse them with a disclosure triangle which I find really useful. In GarageBand I would get this giant stack of tracks and have to keep scrolling up and down amongst them.

One disappointment in the interface is that unlike GarageBand, the waveform isn’t visible until you finish a recording session. It’s not uncommon for me to have clicked on the wrong track when I start recording and I used to be able to tell right away that I’d messed up. At first I thought my only option was to hit undo and rerecord onto the right track because the new audio would splat right over the original audio on that track. But in later testing I figured out that even if it has written over like that, you can cut a clip and paste it onto the right track and the original audio underneath is restored. That was good news, and I think I can get over not seeing the waveform while recording.

Amadeus Pro works really well in editing out sections you don’t want. In GarageBand if you selected a region of a clip and hit delete, it left a big gap and you had to drag the clips back together. With Amadeus Pro the delete automatically pulls the clips together perfectly.

If you’re a fan of keystrokes, you’ll love Amadeus Pro. The ability to use keystrokes to control things is what makes this such a perfect audio editor for the blind. Of my 8 friends who use Amadeus Pro, 6 are blind, one is low vision and only 1, Bart, is fully sighted! They all have one thing in common though: they’ve been super helpful in getting me launched.

There are a couple of things I’m still struggling with in getting used to in Amadeus Pro. Let’s say I’m doing the live NosillaCast show, recording a whole bunch of clips in a track for my voice, I drop in a new track for a dumb question, I’ve got tracks with the end music and I’m all done when someone in the live chatroom points out that I said the date wrong at the very beginning. Make no mistake, this happens a LOT.

I have not yet found a way to tell Amadeus Pro to grab everything to the right of my cursor and drag it to the right. I can shift tracks one by one by dragging or I can define a specific place in time for them to land, but I can’t figure out how to move them all at once. If I’ve already got the Dumb Question Corner music set just right to the start of the question, I’ll definitely have to realign it after moving everything.

Another concept in Amadeus Pro is the play head vs. the insertion point. In all other editors I’ve used, they’re one and the same thing, but in Amadeus Pro it’s critical to pay attention to their different purposes. The play head is a blue triangle and a blue line designating where you want to play the audio back. The insertion point is where you’re going to start recording the next clip. If you don’t pay attention (and as you can tell, I often don’t pay attention) you can end up recording in the entirely wrong place.

Amadeus Pro supports some more advanced capabilities that I haven’t mastered yet. I want to learn more about the “Paste Over” function which allows you to paste one clip onto another and it’s supposed to cause the audio to duck under the upper clip. I know this will be useful when I crack the code on how to use it.

I had an absolute melt down the first time I used Amadeus Pro to record the NosillaCast during the live show. Dan Eckmeier was in the live chat room and I don’t know what I would have done if he hadn’t been there. I recorded the show with 3 or 4 tracks and it was about 40 minutes long. When I went to export from Amadeus Pro to an uncompressed AIFF file at the very end, Amadeus Pro told me that the file was too large! GarageBand had never told me this and the show was often an hour and a half with a half dozen tracks. I didn’t know why it was happening and I had no way forward to fix it.

Dan suggested that I try “bouncing down” the tracks. I had no idea what that meant but I had nothing to lose so I chose “Bounce Document to New File”. It took all of the tracks and squashed them down into one and then I was able to save it out as an AIFF file and all was saved. Dan is my hero.

My other hero, Garth, later explained to me why this was happening. He pointed out that when I export from GarageBand to AIFF it has always said “mixing down”, and that’s the same thing as “bounce down” in Amadeus Pro. He went on to explain that it’s a limitation in the max file size of an AIFF, which is 2GB. I sure was glad that both Dan and Garth were there to help me a) solve the immediate tactical problem and b) to understand why it was happening. Without these two guys I definitely would not have stuck with it.

Garth is continuing to help me learn even more about Amadeus Pro, like how you can put meta data into a template file and maybe I won’t have to do so much work on my final production file with ID3 editor.

Amadeus Pro has been a learning curve for me for sure, but I have to say that it is much faster than GarageBand at creating the AIFF file for me, I’m getting the hang of recording and editing, and if I can just figure out how to slide a bunch of clips and tracks at one time I’ll be golden.

Amadeus Pro is $60 directly from the developer at hairersoft.com or in the Mac App Store.

1 thought on “Replacing GarageBand with Amadeus Pro for Podcasting”