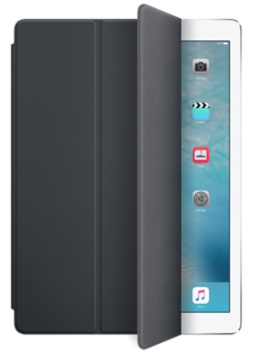 I ordered the iPad Pro Smart Keyboard from Apple when I ordered my iPad but the delivery date isn’t until some time in December. In the mean time I’m walking around with a 13″, $1000 piece of glass in my hand and it’s terrifying.

I was chatting with Bart and he said he’s a big fan of the original iPad Smart Cover. I DO need a way to stand the iPad Pro up for watching videos and a way to comfortably hold it in my lap at an angle for typing until the keyboard cover comes into stock. $59 is a lot of money just to carry me over for 3-4 weeks but who knows, maybe I’ll like it and want to keep it.

I went to the Apple Store today to get the Smart Cover and I asked one of the specialists if they had it in stock. His answer was hilarious. He said that they DO have it stock but they can’t put it on the shelves.

He went on to explain that they’re too BIG and they keep falling over! He took me over to the shelves, and someone had actually put them back out that morning. The iPad Pro Smart Cover box is a little over 1/4″ thick and a FOOT tall.

Not only does the aspect ratio invite them to fall, there’s a second problem. This very thin boxes contain Smart Covers that are magnetic so they can grab onto the iPad. That means they all stick together. You might think this would make them one giant blob that would keep them from falling over, but when you grab one, it pulls the rest of them right off the shelf.

What a weird problem to have. Perhaps it would have been smarter to design the packaging to display them in landscape mode instead of portrait since then they’d only be 9 inches tall?

In any case, after a good laugh with the specialist, I bought the iPad Pro cover in spite of the falling down display and so far I think I’m going to like it.